Public Policy and Politics in Times of Population Decline

In 2025, the percentage of voters age 50 and over will likely reach 60%. At this rate, the time perspective for political decision making may narrow even further. The election system holds the key to rectifying this situation.

In his notable work The Revolt of the Masses, Spanish philosopher José Ortega y Gasset stated that "The health of democracies, of whatever type and range, depends on a wretched technical detail-electoral procedure. All the rest is secondary. If the regime of the elections is successful, if it is in accordance with reality, all goes well...."

In reforming the election system, rectification of vote disparity between urban and rural areas has often been discussed. A topic that requires even greater examination with the rapidly aging population is the creation of an "election system that broadens the time perspective of political decision making."

More specifically, this would form "generation-based election districts" to balance political power among generations. It is a method for distributing the number of legislature seats to members by generation in accordance with the ratio of voters of each generation comprising the population. Other new election systems have also been advocated such as the "domain election system," in which voting rights are conferred on children and their parent vote by proxy, and the "life expectancy voting system," which is an extension of the generation-based election district and calls for legislature seats to be allocated to each generation depending on the average life expectancy of that generation. 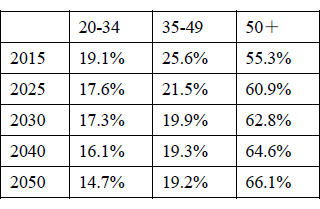 Source: Created based on materials by the National Institute of Population and Social Security Research.

The era of a super-aging society is yet to come. Fundamental reform of public finances and social security is vital. We need to have a serious discussion today about how to structure our democracy, including the interests of future generations who do not have the right to vote; as such structure is the foundation upon which better decisions are made.