Public Policy and Politics in Times of Population Decline

Part 2: Looking at Per Capita Growth

One economic index that governments and politicians often refer to when deciding on growth strategies, economic measures, and many other policies is the gross domestic product (GDP). However, is GDP an appropriate index?

The annual average rate of real GDP per capita growth in Japan over the 12 years since 2003 is 0.82%. Of the major countries shown in the below figure, this is the fourth highest. In other words, Japan has grown moderately in comparison to Europe and the United States. 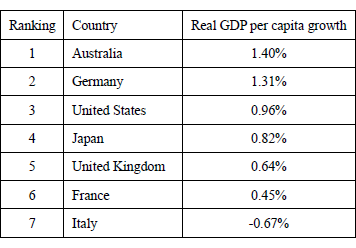 Incidentally, textbook economics presumes it appropriate to express improvements in the standard of living as increases in real GDP per capita. Also, if we employ a "convergence hypothesis," which stipulates that a growth rate declines as the income level rises, it would be natural for the growth rate to slow down as the economy matures.

We need not be overly pessimistic just because the real GDP growth rate is declining. In a society where the population is declining, how fast real GDP per capita, which shows improvement in the standard of living, increases compared to other advanced nations is more important.