As we enter the 21st century, a new pattern of global current account imbalances is emerging as the current account deficit of the United States rises while the current account surplus of East Asian economies grows. Taking as one of its major research themes for this year the design of adjustment policies compatible with Asian integration in this era of trade and financial globalization, RIETI will be conducting research into and making policy recommendations on these topics. The upcoming RIETI Policy Symposium "Resolving New Global and Regional Imbalances in an Era of Asian Integration" to be held on June 17 and 18 at Keidanren Hall in Tokyo, will set the ball rolling by analyzing and discussing the characteristics of such global imbalances, their sustainability, and expected adjustment scenarios. In the run-up to this event, we spoke with Masaru Yoshitomi, the president and chief research officer of RIETI, about the background to the symposium and the uniqueness of its program.

RIETI Editorial Team: The RIETI Policy Symposium "Resolving New Global and Regional Imbalances in an Era of Asian Integration" will be held on June 17 and 18 at Keidanren Hall in Tokyo. Could you give us your perspectives on issues to be addressed at the symposium? 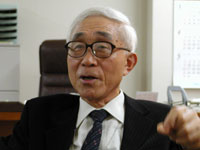 Yoshitomi: I would like to first point to the presence of the huge current account deficit of the United States, as an underlying problem, and the simultaneous rise in trade surpluses and rapid accumulation of foreign reserves of East Asian economies on the other side of the coin. The question is whether these phenomena are sustainable. Concerns are being raised as to just how soon we will see a drastic depreciation of the U.S. dollar, an inevitable move to adjust the huge U.S. deficit. Such a fall in the value of the U.S. dollar would result in the dramatic appreciation of the yen and other Asian currencies. Would this trigger an East Asia-wide recession and worsen deflation? If so, how should we respond?

Secondly, the presence of China and other Asian economies in the global economy is far greater today than it was in the 1980s when the Plaza Accord was concluded and the Japanese yen rose sharply. Today, we are witnessing the emergence of an Asia-wide production network with massive direct investment from Japan and newly industrialized economies (NIEs) flowing into China. More specifically, China imports intermediate and capital goods - high-technology products - from Japan and NIEs, has them processed at low cost by cheap labor, and then exports the finished products to industrialized countries, in particular the U.S. As such, global triangular trade relationships are now being formed, with China fast expanding its processing trade. From certain perspectives, this triangular trade pattern can be perceived as an indication that East Asia as a whole - including Japan - is becoming the factory of the world. This is a distinctive characteristic of today's trade, which was not observable 20 years ago. But then, is such a triangular trade pattern sustainable?

Thirdly, there is the question of what kinds of currency adjustments and foreign exchange regime are desirable for East Asia in order to promote further economic integration in Asia. What would be the impact of exchange rate changes on East Asia, as the factory of the world? This boils down to the question of whether the current Asian exchange rate regime, which is primarily under the fixed rate system, should be maintained or replaced by the floating exchange rate regime or some sort of intermediate system.

These three issues are research themes that are both topical and important from a policy point of view. The forthcoming symposium is an innovative attempt to address all these issues in a comprehensive manner.

RIETI Editorial Team: Could you tell us about the specific contents of the symposium?

Yoshitomi: As announced in the program for the symposium, in Session 1, entitled "Determinants of the sustainability of the U.S. external deficit and the right policy mixes for adjustments," we will examine the sustainability of the U.S. external deficit. In Session 2, "The triangular trade pattern and its implications for global and regional imbalances," we will discuss the aforementioned global triangular trade relationships. Session 3, entitled "Competition and collaboration among economic agglomerations and fragmentation of corporate functions," will focus on the business phenomena that are occurring underneath the development of triangular trade relationships. Specifically, we will be shedding light on the actual state of supply chains as seen in the formation of industrial clusters. In Session 4, "Designing appropriate adjustment policies in Asia," we will review various options with regard to economic, monetary and fiscal policies and structural reform measures, exploring how Asian economies can coordinate policies to cope better with the expected adjustment of foreign exchange rates. In Session 5, "Optimal exchange rate regime for Asia," we will examine, based on our discussions in the preceding sessions, what kind of policy mix would be desirable for Asia to alleviate the impact of adjustment burdens in resolving the U.S. deficits so as to facilitate further development and integration of Asian economies. In this session, we would also like to put our ideas together into a set of policy proposals. Finally, in Session 6, we will sum up by holding a panel discussion on the theme of "Searching for optimal adjustment policies both in the U.S. and Asia."

When I say "policy mix," I am referring to a combination of policies in different fields, namely, policies vis-a-vis the magnitude of foreign exchange adjustments, the degree of reliance on fiscal policy, monetary policy, and structural reform measures. And the mix must be just right because a wrong combination of policies could result in an economic recession and a rise in unemployment. Thus, the ultimate goal of the forthcoming symposium is to make policy proposals for the realization of an appropriate policy mix.

An international symposium with brainstorming discussions is what we are aiming for. I do hope that through our discussions at the symposium we will be able to home in on various issues, be clear-cut in identifying the core problems, and put forward policy proposals which are precise and to-the-point. I say this in reflection of our experience with the Plaza Accord two decades ago. At that time, no policy mix had been designed beforehand, which fact is blamed for the string of confusions that ensued the signing of the accord. If we, RIETI, can demonstrate intellectual leadership and present an optimal policy mix through our symposium, it would be a major contribution.

RIETI Editorial Team: What would you say are the distinctive features of the symposium?

Yoshitomi: Participant profile is quite distinctive. Researchers coming together for this symposium from all over the world are the leading experts in their respective fields. For instance, we will be hearing a presentation by Ms. Ann-Marie Brook, an economist at the Organisation for Economic Co-operation and Development, on the findings from a simulation analysis of the impacts of U.S. deficit adjustments. Then, based on her presentation, the designated discussant will provide their comments to further deepen the debate.

There will also be those who are at the forefront of policymaking. For instance, we will be joined by Mr. Albert Keidel, deputy director of the U.S. Treasury Department's Office of East Asian Nations. Mr. Keidel, who is in charge of policy vis-a-vis the Renminbi at the Treasury Department, is also a member of a U.S.-China study group on China's foreign exchange system. Meanwhile, I am expecting that Hitotsubashi University's Professor Haruhiko KURODA, who is formally Japan's vice finance minister for international affairs, will share his first-hand view on Japan's experience in the 1980s.

In the run-up to the symposium, we have been quite energetic in organizing workshops. And we plan to hold a series of international conferences like this in the future. So, the forthcoming symposium is no special event, really. Rather, it should be viewed as an extension of our regular research activities.

RIETI Editorial Team: How would you characterize this symposium as an occasion to send a message to the rest of Asia?

Yoshitomi: Ever since the signing of the Plaza Accord in 1985, Japan has gone through sudden appreciations of the yen as a repercussion of U.S. deficit adjustments. Other Asian countries, however, will be facing a drastic weakening of the U.S. dollar - probably comparable to what we saw in the 1980s - for the first time since emerging as NIEs. Many policymakers and economists in Asia believe that the Japanese economy was weakened by the appreciation of the yen subsequent to the Plaza Accord. In reality, however, Japan had robust economic growth and an asset bubble in the latter half of the 1980s, a period in which the yen rose sharply. Then, in the 1990s, Japan plunged into long-term economic stagnation. In the forthcoming symposium, we will be considering how we can deal with the expected fall of the U.S. dollar against Asian currencies, deriving lessons from Japan's experience in the 1980s and afterward. In this sense, I believe that with this symposium we can make a significant intellectual contribution to policymaking.

Interview conducted by Akiko Kumagai, online editor, on June 8, 2004. The above interview originally appeared in RIETI Report on June 10, 2004.