What Roles Should Japan Play in Asian Economic Integration?

As we enter the 21st century, a new pattern of global current account imbalances is emerging as the current account deficit of the United States rises while the current account surplus of East Asian economies grows. Taking as one of its major research themes for this year the design of adjustment policies compatible with Asian integration in this era of trade and financial globalization, RIETI will be conducting research into and making policy recommendations on these topics. The upcoming RIETI Policy Symposium "Resolving New Global and Regional Imbalances in an Era of Asian Integration" to be held on June 17 and 18 at Keidanren Hall in Tokyo, will set the ball rolling by analyzing and discussing the characteristics of such global imbalances, their sustainability, and expected adjustment scenarios. In the run-up to this event, we spoke with Faculty Fellow Kyoji Fukao, who will be a discussant at the symposium, about the background of the imbalances and its relations with Asian integration.

RIETI Editorial Team: What are the problems of the "new global imbalances" in current account? 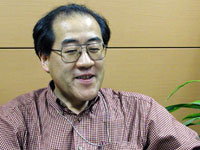 Fukao: The United States is running huge current account deficits, which is raising the question of sustainability. The presence of Japan's current account surpluses, which are reaching to an unprecedented level, is also posing the possibility of trade friction. In addition, the overheating trend of the Chinese economy may cause inflation such as the one Japan experienced in the first half of the 1970s, which is another potential macroeconomic problem.

East Asian countries have a peculiar trade pattern as compared to Europe. In the machinery sector (except for automobile manufacturing) such as electric equipments, office appliances and precision instruments, substantial growth of intra-industry vertical specialization is observed. This is the result of the initiatives undertaken by multinationals, including Japanese companies, to promote the vertical specialization of their activities, and intra-industry trade has been quite active. Also, with the expansion of its economy, China's demand is growing for high-end intermediate goods - special steel plates, chemical products and key components - that cannot be produced domestically as well as for capital goods such as machinery and equipments for factories. And for this, industrialized countries in the region - Japan and South Korea - are serving as a supplier. In trade between Germany and France, automobiles are the largest trade item. In contrast, semiconductors are the top item in trade between Japan and South Korea. In the machinery sector except for automobiles, Asia has established a very precise pattern of vertical specialization, which is bringing substantial benefits to the region. For instance, thanks to high efficiency achieved through such specialization, Asia has been able to rapidly expand production to become a major supply center for the rest of the world. Looked at from a different angle, however, this means that Asia is lagging behind Europe in the deepening and liberalization of trade in other sectors. Be it automobiles or processed food, there remain various restrictions hampering trade. The expansion of intra-industry trade, where different countries producing a wide variety of different products trade among each other, has yet to be seen. Yet, the presence of trade barriers and the delay in vertical specialization in areas other than electronics and precision machinery can be taken as pointing to great potential for substantial trade expansion in the future. Creation of more closely-knit trade networks may bring huge benefits to Asia by enhancing productivity and improving the welfare of consumers in the region.

RIETI Editorial Team: So, Asia has a peculiar trade pattern. Then, what is your view on the economic integration in Asia?

Fukao: Up until five to 10 years ago, East Asia had been basically calling for open regionalism. There was a momentum for promoting multilateral trade liberalization by opening up the market to the rest of the world, rather than pursuing trade expansion between two countries or within a region by means of free trade agreements (FTAs). Behind this lies the fact that East Asia, including Japan, has come to serve as a major machinery supply center for the rest of the world, capitalizing on the efficient production system of the region. However, the new round of trade negotiations under the World Trade Organization (WTO) were bogged down in Seattle and then again in Cancun. In the mean time, a series of FTAs have been concluded various corners of the world, thus, generating a compelling atmosphere in which countries would be driven to seek FTAs so as not to miss the bandwagon. In the run-up to the effective conclusion of Japan-Mexico FTA, for instance, the Japanese business community, in a concerted effort, urged the government to quickly conclude such an FTA, claiming that Japanese companies would otherwise be put at an extreme disadvantage vis-a-vis their American and European rivals in doing business in or with Mexico. The Japanese government, for its part, seems to be promoting FTAs in a somewhat passive manner, that is, simply because other countries are moving toward that direction. Given the peculiarity of East Asia as a major supply center for the world as I have mentioned earlier, and considering the growing importance of East Asia in the global economy, Japan should be playing a leading role in negotiations under the WTO.

FTAs inevitably raise the issue of the rules of origin. Should two countries agreeing to an FTA remove trade barriers only between their countries, it would become necessary to prove the origin of their products in order to plug the loophole for selling goods procured from a third country. Preparing certificates of origin would incur additional costs on companies.

Under the GATT-WTO regime, member countries are allowed to form an FTA only when such a regional trade arrangement is designed to liberalize "substantially all" trade (GATT Article XXIV). In reality, however, "FTAs of poor quality" - which are far from being complete liberalization - are rampant. Under the soon-to-be-finalized Japan-Mexico FTA, for instance, Japan would simply give preferential treatment to pork and other agricultural produce from Mexico by setting up a preferential import quota. As many other countries are moving to conclude FTAs, Japan surely needs to avoid being left behind the rest of the world. However, many specialists in international economics believe that the ongoing situation where many countries, including Japan, are moving to form FTAs of poor quality is not desirable for the global economy.

RIETI Editorial Team: What roles do you think Japan should be playing?

Fukao: To begin with, we need to properly analyze the cost and benefit of concluding an FTA. Concerning the Japan-Singapore agreement on economic partnership, for instance, no follow-up analysis has been made on the cost-benefit performance of the agreement. The European Union, a forerunner in exclusionary regionalism such as customs union and FTAs, have put up extremely complex trade barriers with both tariff and non-tariff barriers applicable to non-EU trade partners substantially differing from one country to another. Indeed, Centre d'Etudes Prospectives et d'Informations Internationales (CEPII), a quasi-governmental research institute in France, has been conducting detailed analysis on tariff and non-tariff trade barriers imposed by trade partners. In Japan, however, institutes undertaking such research are almost nonexistent. Speaking from the viewpoint of a researcher, semi-governmental research institutes, such as RIETI, should conduct detailed analysis productivity performance and non-tariff barriers both by industries from the viewpoint of long-term national interests, rather than simply calculating statistics using a broad-brush database by industries such as the GTAP model. I can almost hear someone saying that it would not be so easy, though.

Within the Japanese government, many of those who used to be in charge of WTO issues are now handling FTA-related matters. But they should properly examine the reasons why the new round of WTO negotiations remain bogged down and think how they can break the ongoing impasse. Considering its national interests, Japan cannot afford to be left behind the ongoing moves toward FTAs. At the same time, however, Japan should be more vigorously promoting the new round of WTO negotiations. A new group of countries, such as India, Brazil and China, is now emerging as a player endowed with substantial bargaining power and raising objections to the modality of multilateral negotiations. It is an important role of Japan to think out ways and call on other WTO member countries to promote trade negotiations in a way satisfactory to these newly rising countries.

Interview conducted by Akiko Kumagai, online editor, on May 24, 2004.