Challenges Posed by the Full Liberalization of the Electricity Market: Japan must find ways to ensure a stable power supply

Since the 1990s, the government has been working to liberalize the electricity market in a stepwise manner in a bid to address the comparatively higher energy prices in Japan. However, the retail market for household customers, which accounts for approximately 40% of total electricity demand in Japan, has remained regulated.

In this segment of the market, 10 general electric utilities (GEUs)—i.e., those undertaking the full scope of operations from power generation to transmission, distribution, and retail supply—are designated as the sole supplier and hence obliged to meet the demand in their respective service areas. In order to secure a stable supply of electricity, the rate of return pricing system has been adopted thereby enabling the GEUs to fully recover the cost involved. Furthermore, electricity rates determined in such a manner have been subject to government regulations so as to prevent them from charging unreasonably high rates to their customers in the regulated market, who have no alternative but to rely on the GEU operating in their region.

When the retail market is fully liberalized, the rate of return pricing system will be abolished immediately, but government-regulated prices will remain applicable until sufficient competition comes into play. Thus, customers will be able to continue to have their electricity supplied at regulated prices if they prefer. Meanwhile, the full liberalization of the electricity market and the abolition of the rate of return pricing system may drastically change the way in which the GEUs operate, coming at a time when demand for electricity is plateauing due to the population decline. In what follows, I would like to discuss three points concerning the challenges ahead.

The first point concerns climate change. The current regulated prices provide incentive for electricity users to save electricity, applying higher rates to consumers using more electricity. Conversely, it means that there is greater room to lower the rates for households with higher electricity consumption. This is why virtually all new electricity rate plans offer higher discount rates to power-hungry households.

However, liberalization in which the benefit of lower electricity rates centers on power-hungry households appears to be running counter to the efforts to tackle global warming because such heavy users' incentive for saving electricity would be reduced as their rates are lowered. As shown in the figure below, energy consumption in the commercial and residential sector has been increasing rapidly over the recent years. Thus, a major challenge in implementing the full liberalization of the electricity retail market is how to strengthen measures to reduce greenhouse gas (GHG) emissions in households. 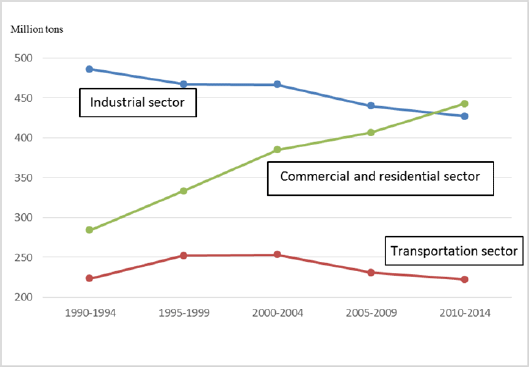 Note: Average annual GHG emissions for each five-year period as calculated by the author are based on data provided by the National Institute for Environmental Studies. Figures for FY2014 are preliminary.

In addition to reinforcing the existing energy conservation measures, the government could take two comprehensive measures. One is price control by means of imposing carbon taxes on electricity retailers. The other is quantity control mandating them to procure a certain percentage of electricity generated from non-fossil fuel sources (i.e., renewables and nuclear). Both approaches are expected to induce greater energy-saving efforts at the household level by way of higher electricity rates.

In line with the targeted energy mix for 2030 adopted in July 2015, the government made its intention clear to implement quantity control measures to raise the percentage of electricity generated from non-fossil fuel sources to 44% or above, setting a policy to promote retailers' voluntary efforts as the first step toward achieving that end. Reflecting on the experience with the feed-in tariff system that failed to properly control the penetration of renewables, the government's policy that seeks to achieve its GHG emissions reduction target in FY2030, down 26% compared to the level in FY2013, by quantity control rather than price control is considered reasonable.

In February 2016, a group of retailers established the Electric Power Council for a Low Carbon Society (ELCS) and announced their intention to work together to achieve the reduction target. In the event of continuous failure to bring nuclear power plants back into operation and an insufficient supply of non-fossil fuel energy sources, achieving a high non-fossil energy source ratio would require control over the volume of electricity sold, the denominator of the ratio. In such case, retailers would be forced to make a tough choice between a coordinated reduction in electricity supply or a forcible reduction through selection and integration. We are now being faced with the very difficult question of how to strike a balance between the two conflicting goals of promoting liberalization and addressing global warming.

The second point concerns the use of the market mechanism. Up until now, the rate of return pricing system has allowed the GEUs to automatically pass the cost of capital investment onto end-users through the government-regulated electricity rates. Under this system, they have been able to maintain sufficient power supply capacity—including facilities operating at a low capacity level—and thereby ensure a steady supply of electricity at all times without imposing any restrictions on demand. After the full liberalization, continuing to maintain facilities with low capacity utilization rates will be a significant cost burden. Thus, it will be necessary to increase the capacity utilization rates for greater efficiency by load leveling, i.e., shaving the peak load by setting higher rates for peak-time usage.

What is needed here is to introduce the idea of leveling the hitherto unrestricted electricity demand through a price mechanism. Electricity prices reflective of the supply/demand balance are determined in the wholesale market where power generators and retailors (suppliers to end-users) trade electricity. In this market, electricity prices fluctuate as supply and demand change. Accordingly, when supply is tight, prices rise. By linking retail prices for end-users to wholesale prices, it may be possible to suppress peak-time demand because retail prices go up.

New electricity rate plans announced by electricity retailers include those in which rates are linked to wholesale market prices and those that offer discounts in return for saving electricity in designated time slots. These are attempts to level the electricity demand through a price mechanism but which so far have been unable to attract a sufficient number of end-users to make any impact. In order to expand such positive initiatives across a broader spectrum of users, it is necessary to develop technologies that would enable the timely dissemination of price information to end-users.

One potentially effective way is to introduce a power demand control system that can automatically change the level of electricity usage according to price fluctuations, which can be achieved by combining big data on electricity consumption obtained from smart meters (next-generation power meters) and power controllers such as home energy management systems (HEMS).

Under the rate of return pricing system, GEUs have been able to include the cost of power generation in regulated electricity prices. However, when prices are liberalized, loss-making power plants would be removed from the market because maintaining such backup facilities puts their operators at a significant competitive disadvantage. Therefore, in order to increase the penetration of renewable energy sources without jeopardizing the stable supply of electricity, it is necessary to introduce a mechanism for subsidizing the cost of operating and maintaining backup power plants.

After the earthquake and nuclear accident in March 2011, many critics pointed to the rate of return pricing system as the primary culprit for the lack of cost reduction efforts on the part of the GEUs. Indeed, it is true that they have not been sufficiently cost-conscious. However, the rate of return pricing system has been an essential mechanism for the GEUs that need to maintain sufficient power generating capacity—including power plants with low utilization rates—in order to ensure the stable supply of electricity.

Given the prospect of a dwindling population, there is no expecting a rise in their utilization rates. We must develop and use our knowledge and ingenuity to find ways to safeguard the steady supply of electricity from being disrupted by the abolition of the rate of return pricing system. The development of technologies that allow for large-scale electricity storage at low costs would solve many of the problems that could jeopardize the stable supply of electricity, but it will take some time before that becomes reality. Until such technologies start to be developed, we need to create and put in place a new regulatory system to enable the GEUs to maintain underutilized power plants in the liberalized market.

In order to encourage the GEUs to make the necessary investment in power generating facilities, such a new system must provide them with greater predictability about the recovery of costs. Also, the system should be designed in such a way that retailers would bear their fair and equitable share of the cost involved. With both the United States and Europe still in the trial and error stage of endeavor, Japan is being tested on its ability to design an efficient regulatory system for ensuring the steady supply of electricity.