Let us cast our thoughts to Japan in 2050, 35 years from now. While future predictions are never without errors, a nation's population composition can be predicted at a relatively high accuracy. A close look at Japan's predicted population points to the arrival of the aging society on a scale that has never been experienced before.

The figure below shows the population prediction by gender and age, compiled by the National Institute of Population and Social Security Research (median prediction). The size of the elderly population (65 and over) is projected to reach the equivalent of 71% of the working-age population (15-64) (compared to 40% in 2015). 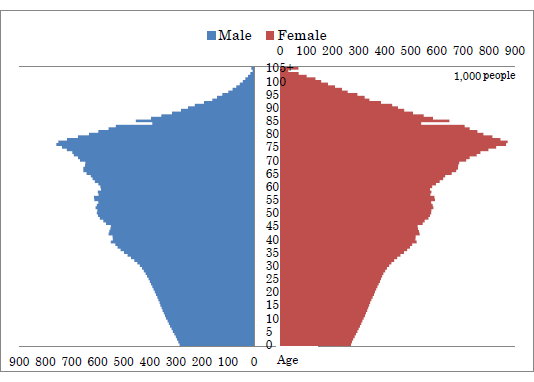 A change in population composition causes various issues. The most serious is the fiscal imbalance due to higher social security expenditures and lower tax revenues, triggered by the contraction of the working-age population. Some simulation results indicate that if the current condition continues, the nation would face a fiscal crisis. Fundamental solutions suggested require substantial changes to the labor market, i.e., boosting the women's labor force participation rate and promoting the employment of the elderly population in addition to increasing the consumption tax rate. Let us examine these proposals from the perspective of labor economics.

According to the Organisation for Economic Co-operation and Development (OECD), the labor force participation of women aged 25-54 in Japan stands at 71.8% in 2014, which puts the nation at 24th out of 41 countries. The fact that many women work as non-regular workers is reflected in Japan's gender pay gap of 27%. Japan has one of the world's largest gender pay gaps alongside South Korea's 37%. There is substantial room for improvement. Promoting women's employment in full-time positions is an important key to supporting our aging society.

What are the inhibiting factors for boosting women's labor force participation rate and encouraging their employment in full-time positions?

It is a known fact that the main factor inhibiting women's employment as regular workers is life events such as marriage and childbirth, at which point many women leave the workforce. This is why the rate of women's workforce participation follows the so-called M-Curve, dipping in their early 30s and rising again in their early 40s when they have more time away from parenting. When re-entering the workforce, many women start as non-regular workers, increasing the ratio of non-regular workers among women.

To increase the ratio of female regular workers, it is important to develop an employment environment that makes it easy for them to stay with the same employer after childbirth in their 20s, and also to find a position as a regular worker when returning to the workforce.

The selected group of regular employees is subjected to long working hours as employers try to recoup the fixed cost of their wages. In the event of office closure or elimination of some positions, its impact is absorbed through the reshuffling of the company's workforce across wide areas to ensure employment. Regular employees enjoy job security and training opportunities to advance their career with a long-term outlook within the company in exchange for accepting long working hours and transfers to branch offices anywhere in the country.

These characteristics of Japan's employment system create difficulty for married couples to both maintain regular employment while starting a family and raising children at the same time. The system is supported by the traditional family model involving a husband in regular employment and working long hours and a wife who stays at home or works part time. This family model, in turn, is reinforced by the social norm that men should work and that women should stay at home to look after the family. When two individuals start a family, their legal agreement alone may not be enough to sustain their cooperative relationship, and social norms are necessary to fill such gaps like lubricant.

The employment system, family model, and social norms regarding gender roles complement one another institutionally and stably. Transforming the employment system would require changing people's perspectives on the roles of a family and gender. This makes some people feel as if their view on life has been denied, potentially leading to emotional arguments.

Yet, if we passively observe the situation, women's regular employment will not increase, and the Japanese economy will become unsustainable. It is necessary to share the common awareness that promoting women's regular employment is a social goal, while setting issues needs to be done with great sensitivity. Only the government can lead a comprehensive institutional reform which cannot be achieved through the efforts of individual companies or persons alone.

The introduction of monetary resolution for unfair dismissal should be actively promoted to define a clear procedure for the dismissal of employees. Debate should also be encouraged about the proliferation of the limited-type regular employment system and the clarification of rules for dismissing such employees. Since it is politically difficult to set clear rules for dismissal, some argue that priority should be given to deregulating working hours and non-regular labor. However, this would only extend the working hours of regular employees, creating a deeper divide between regular and non-regular work forces.

The desirable approach would be to set clear dismissal rules to lower the fixed cost of hiring regular employees, and unify the labor market that is currently divided between regular and non-regular workers. We must avoid falling into the same pitfall as some continental European countries, where political compromise led to the deregulation of only fixed-term employment and created a dual labor market.

The real issue lies in the ratio of non-regular workers rather than the rate of workforce participation. According to the Labor Force Survey by the Ministry of Internal Affairs and Communications, 73% of workers aged 65 and over were in non-regular employment in 2014. It is a common pattern also in other developed nations for elderly workers to work shorter hours in the process of reaching full retirement. In Japan, it is an established custom for workers to retire from regular employment once at the age of around 60 and become re-employed as non-regular workers.

The mandatory retirement practice at a fixed age is adopted due to the fact that the wages of elderly workers in pre-retirement age exceed the level of their productivity. Behind the practice of paying above-productivity remunerations to older workers lies the tactically designed employment management system in which companies pay younger workers less than their productivity and redistribute the pooled fund to middle-aged and older workers as a form of incentive.

This means that abolishing the mandatory fixed-age retirement system could lead to the overhaul of the current employment management structure with potentially significant side effects. It might take time, but it is desirable to level the wage curve and bring up the mandatory retirement age.