For AGO Takanori's full bio,
http://www.voxeu.org/person/takanori-ago

There are common geographical differences in working hours between countries and regions. Working hours are longer in developing countries, as well as in more urbanised regions compared to rural ones. This column explains these differences with two key factors: production technology and urban agglomeration. Technological progress leads to a decrease in working hours, whereas urban agglomeration leads to an increase.

Working hours increased during the Industrial Revolution and decreased afterward (Voth 2003). Although working hours decreased after World War II all over the world, overworking has become a social problem in the US, among others (Kuhn and Lozano 2008).

There are two stylised facts on geographical differences in working hours across countries and regions.

If urbanised regions such as big cities are regarded as developed countries, these two facts look contradictory. We show in this column that this is not a contradiction. We present two key factors--production technology and urban agglomeration--which explain the mechanisms behind the geographical differences in working hours.

Why do people work shorter hours in developed countries than in developing countries?

Figure 1 plots the relationship between the average number of working hours and the GDP per working hour in OECD countries. The relationship is negative, indicating that workers in developing countries work longer than those in developed countries. In Ago et al. (2014), we attribute it to the difference in the production technology. The higher the technology level is, the higher the GDP per capita is, and the less there are of workers who supply labour. 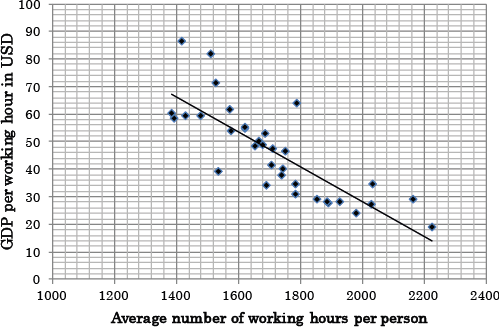 As mentioned in the beginning, working hours first increased and then decreased. In Ago et al. (2014), we showed that:

That is why there are fewer working hours in more developed countries than in less developed ones among the OECD countries.

Why do people work longer in cities than in rural regions?

The second stylised fact is the interregional difference in working hours, where production technology is similar among regions within the same country. That is, the interregional variations in working hours cannot be explained by the difference in technology level. Instead, it may be explained by the differences between urban and rural regions, where the degree of agglomeration of economic activities differs. Thus, we focus on the population density, which is a surrogate for spatial agglomeration of firms and workers.

Figure 2 depicts the relationship between the average number of working hours per week and population density in Japanese prefectures. Their relationship is obviously positive. The reason is explained by Ago et al. (2015) in the following manner. In urban regions involving large populations, firms tend to agglomerate due to large market size. This raises the real wage because of high access to consumption goods, and workers increase labour supply in order to receive high wage in high-density regions. 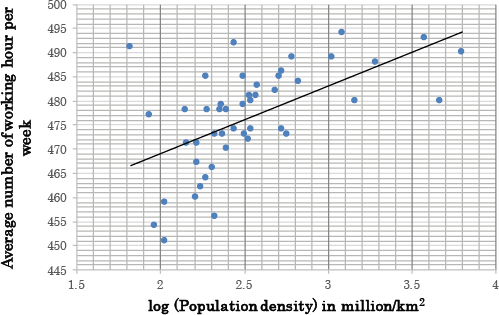 In addition, there is circular causality which promotes agglomeration of economic activities in urban regions. The large supply of labour attracts more firms, which then makes the working hours long. Long working hours enlarge the market size, further promoting agglomeration of firms. Under an elastic supply of labour, the circular causality is so strong that firms agglomerate even in the absence of labour migration.

Although working hours are long, individual welfare is shown to be high in urban regions with high population density as compared to rural regions. This may suggest that the urban policy of shortening working hours may not be desirable from a social welfare point of view.

In Ago et al. (2015), we identified the agglomeration force and the dispersion force. Once agglomeration force is larger than the dispersion force, circular causality is at work. We showed that when interregional trade costs of consumption goods are low, the former force dominates the latter, so that firms are likely to concentrate in the urban regions. For example, an extension of highway networks decreases the interregional trade costs, which raises the number of working hours and attracts firms to urban regions such as Tokyo, while reducing working hours and the number of firms in rural areas.

This article first appeared on www.VoxEU.org on January 4, 2016. Reproduced with permission.