Challenges Posed by the Full Liberalization of the Electricity Market: Complete unbundling of power generation and grid operations is crucial

In April 2016, Japan's 17 trillion yen electricity market will begin to unfold toward full liberalization. If all goes successfully, this would mark the biggest ever regulatory reform in the nation's electricity sector and provide a significant chance to the Japanese economy.

First, opening the market that has been controlled by regional power monopolies will enhance business-to-business competition and thereby help remove monopolistic inefficiencies in power generation as well as in retail services. Successfully creating an effective competitive environment will likely reduce end-user electricity prices in Japan, which are relatively high among advanced economies.

The entry of non-power companies—those with know-how and expertise in various industries—into the market may lead to the creation of energy services that offer new value added. Their focus should not be confined to the domestic market. Renewable energy sources such as solar and wind are being introduced across the world at an accelerated pace, while innovative technologies, such as smart meters or next-generation electricity meters, are being developed in the energy industry. Achieving path-breaking innovations in this field ahead of foreign competitors would provide Japanese companies with a foothold in advancing into huge overseas markets.

What are the keys to enabling them to take advantage of this opportunity and making the reform a success? In what follows, I would like to explain this by drawing on lessons from experience in other countries.

An electricity market is composed of three segments, namely, power generation that operates power plants, grid operations that transmit and distribute electricity from power plants to consumers, and retail services that purchase electricity from power generators and sell it to consumers. Up until the 1990s, all three business segments were operated by regional power monopolies in countries around the world, as shown in the left half of the Figure. The liberalization of the electricity market that began in the 1990s in many countries represents a shift from this structure to the one shown in the right half of the Figure.

Figure: Electricity Market Before and After Liberalization 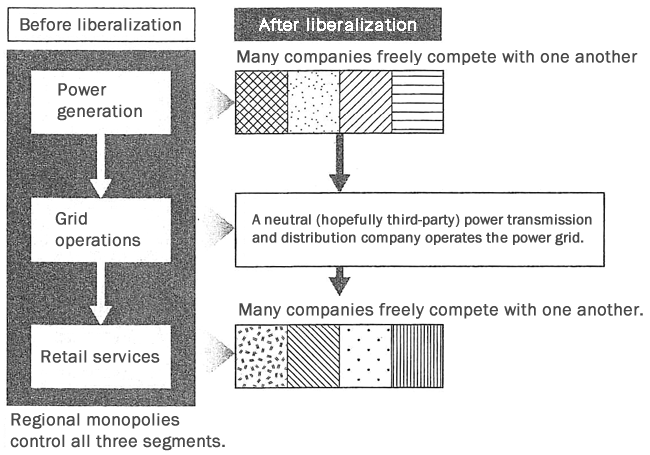 Reform of the electricity market typically occurs in the following steps. First, power grid operations are unbundled from the other segments of power utilities with a regional monopoly to create a legally independent entity to operate the power grid. Failure to make this segregation properly would leave incentives for the regional power utilities to unfairly block or limit newcomers' access to the grid that continues to remain under their control.

In parallel with this, the power generation segment of the electricity market is liberalized to allow anyone to construct a power plant and generate electricity. Many economists from around the world have empirically shown that enhanced competition in this segment of the market will lead to a significant decrease in the cost of power generation. Power generators have no incentive to reduce costs when they can sell electricity at prices set under the rate of return pricing system, namely, based on whatever costs incurred. However, when competition is increased as a result of liberalization, they face a situation where electricity generated at high costs would find no buyers, forcing them to operate their power plants efficiently. The liberalization of the retail segment of the market comes last.

The key to success with the ongoing electricity regulatory reform in Japan boils down to four factors.

First, all of the reform plans set out by the current government for implementation over the period through 2020 must be executed fully and without fail. While the government plans to fully liberalize the retail market in April 2016, the unbundling of grid operations will take place only in 2020.

The experience of other countries shows that the unbundling of grid operations and the facilitation of competition in power generation are the most important in the entire process of electricity market liberalization and reform, in terms of economic benefits delivered to the general public. This crucial step with the greatest potential benefits to the public must not be deferred and left to fade into obscurity.

Second, neutrality in grid operations must be ensured. Even if there are potential new entrants into the power generation and retail markets, there will be no effective competition unless fair and equal access is provided. The planned unbundling of grid operations from the other operations of the regional power utilities will be implemented in the form of legal unbundling, meaning that each regional power monopoly's business unit in charge of grid operations will be split off into a legally separate entity. Such a new entity, however, will be allowed to have a capital relationship with its parent utility to remain under its umbrella.

In terms of ensuring neutrality in grid operations, this approach is rather weak compared to those taken in other countries, giving rise to the need for continuous monitoring by the regulatory authorities. For instance, in the United States and some European countries, a third-party public entity (or independent system operator) handles the entire grid operations, although the ownership of grid assets remains with the respective power utilities. In other words, business units in charge of grid operations are completely eliminated from regional power utilities.

A major advantage of having a third-party public entity as the operator of the power grid is that newcomers will be assured of fair and equal access to the grid. For instance, it eliminates the concern that the grid operator might set exorbitant wheeling charges, which represent fees for use of power transmission and distribution facilities, in an attempt to block newcomers from entering the market.

In contrast, under the Japanese approach, the relationship between a newly created grid operator and the former one, namely, the monopoly utility in the region, will not be severed completely. Such new grid operators, those that will remain under the umbrella of their respective parent utilities, will have a strong incentive to treat newcomers unfairly in terms of access to the grid. Thus, whether neutrality in grid operations can be achieved hinges crucially on the ability of newly created regulatory authorities—e.g., the Organization for Cross-regional Coordination of Transmission Operators (OCCTO) and the Electricity Market Surveillance Commission (EMSC)—to maintain strict monitoring.

Competition in the power generation market can be facilitated in various ways. A typical approach taken by many countries is to force regional monopolies to unbundle their power generation business segment into a separate company that is independent and not under their umbrella, or to sell their power plants to such a separate and independent company. This will facilitate competition by creating a level playing field for both incumbent and non-incumbent power generators.

It is also important to invigorate the wholesale electricity market. Currently, only about 2% of the electricity generated in Japan is traded in the wholesale market, which is extremely low compared to 50% or more in other advanced economies.

Lastly, as the fourth factor for success, I would like to point to the enhancement of the retail sector by facilitating competition and promoting the creation of new services that offer value added. As aforementioned, since the cost of power generation constitutes a large portion of the cost of electricity, a significant reduction in electricity bills for consumers cannot happen without competition in the power generation market. However, if the planned liberalization leads to improved efficiency in retail supply services, consumers can hope for somewhat better prices and services, for instance, in the form of package deals with other services such as mobile phones, Internet connection, and gas supplies, or with gasoline sales.

Even greater value added could be generated by promoting the use of an electricity pricing system with a peak demand shifting effect. Following the March 2011 earthquake, we were told that electricity supply was, and would remain for some time, in perpetual shortage, but that message was quite misleading. Although there may be a supply shortage in peak times such as afternoons in the summer and early evenings in the winter, supply exceeds demand in much of the rest of the day.

Pricing systems designed to shift demand from peak to off-peak hours typically offer lower rates for use in low-cost hours to encourage "smarter" use of electricity, thereby reducing the total cost of electricity for consumers. Such variable rate electricity plans are one example of an attempt to offer new value added. We must not let the liberalization of the electricity retail market end up being a scramble for a bigger piece of the pie, but instead turn it into an opportunity to create new value. If we manage to do so, we can move ahead of other countries and present a new model of a liberalized retail market.

The full liberalization of the enormous electricity market, which is unparalleled throughout history, is being closely watched by companies and governments from around the world. It is strongly hoped that this reform will prove to be a great opportunity for the Japanese economy.