How did the Global Financial Crisis misalign East Asian currencies?

Since the East Asian financial crisis of 1997, the emphasis on regional monetary cooperation has grown. This column discusses recent research into intra-regional exchange rate misalignments. In the aftermath of the Global Financial Crisis, investors in the US and Europe withdrew from emerging markets, causing a depreciation of emerging-market currencies against the US dollar. At the same time, the appreciation of the Japanese yen - fuelled in part by intra-regional capital flows - has increased the misalignment of intra-regional exchange rates.

Some East Asian countries experienced a serious currency crisis in 1997. The crisis was blamed on both the de facto US dollar peg system and double mismatches of domestic financial institutions' balance sheets in terms of currency and maturity. Following the Asian currency crisis, recognition of the importance of regional monetary cooperation has steadily grown. Specifically, the monetary authorities of most East Asian countries have come to perceive the importance of monitoring intra-regional exchange rates. The Association of Southeast Asian Nations (ASEAN) +3 (Japan, China, and Korea) has promoted regional monetary cooperation within the framework of the Financial Deputy Ministers' Meeting (Bayoumi et al. 2000) (Note 1). In the early 2000s, two important regional arrangements - the Chiang Mai Initiative and the Economic Review and Policy Dialogue - were established among the ASEAN+3. Both are regarded as symbols of regional monetary cooperation in East Asia.

The objective of currency swap arrangements such as the Chiang Mai Initiative is to manage currency crises. The Economic Review and Policy Dialogue is a system in which the monetary authorities monitor the performance of each country's macroeconomic variables and the soundness of each country's financial sector in order to prevent currency crises from occurring. Monitoring intra-regional exchange-rate fluctuations and misalignments is also necessary.

To meet this objective, Williamson (1999), Kuroda and Kawai (2003), and Ogawa (2004) have suggested introducing a common basket system into East Asia. Among the various approaches used to calculate a common currency basket, Ogawa and Shimizu (2005) have proposed a new measurement called the Asian Monetary Unit (AMU). The same method applied to calculate the European Currency Unit is used to calculate the AMU. Deviation indicators of the AMU's component currencies are calculated based on the AMU in order to monitor deviations of East Asian currencies from their benchmark levels.

The impact of the Global Financial Crisis

We used the PPP-based AMU deviation indicator adjusted by the Balassa-Samuelson effect to investigate how the East Asian currencies were affected by the Global Financial Crisis of 2007-2008. The crisis was triggered by the BNP Paribas shock during the summer of 2007. As many US and European financial institutions had significant holdings of subprime mortgage-backed securities, they were badly affected by excessive defaults on subprime mortgages. Even though most East Asian financial institutions were not directly affected by subprime mortgage defaults, the related economic slump in the US and Europe had indirect adverse effects on the East Asian economy.

After the collapse of the housing bubble in the summer of 2007, many US and European financial institutions faced a serious liquidity crisis because of their own counterparty risks in interbank markets. This greatly reduced the risk tolerance of US and European financial institutions and institutional investors. As a result, they withdrew their short-term capital from all over the world, including from emerging economies. This led the currencies of these countries - including East Asian currencies - to depreciate against the US dollar.

Those East Asian currencies that converged in the early sample periods have also been diverging since late 2005. One of the main reasons for these changes has been capital movements among East Asian countries. 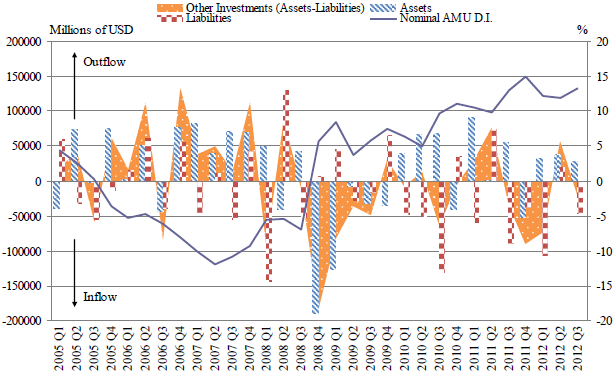 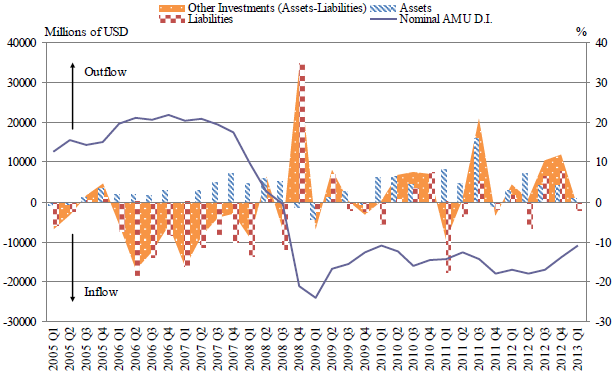 Note: The left scale gives the volume of transaction in other investments; the right scale gives the rate of change of the nominal AMU deviation indicator.
Source: International Financial Statistics (IMF) and RIETI online database

In the case of Japan, the category of other investments tended to be positive before the third quarter of 2008, and then turned negative. This shows that Japan experienced capital outflows before the Global Financial Crisis, and capital inflows afterwards. Due to these capital flows, the Japanese yen first depreciated and then appreciated. In the case of Korea, the category of other investments was negative until the third quarter of 2008, and turned positive at the end of 2008. This implies that Korea faced capital inflows before the Global Financial Crisis, and capital outflows afterwards. These capital flows pushed the Korean won toward overvaluation from 2006, but also made it fall into undervaluation after the bankruptcy of Lehman Brothers. By comparing the other investments of Japan with those of Korea, we find that they were moving in opposite directions, especially from the beginning of 2006 to the third quarter of 2008.

Editor's Note: The main research on which this column is based (Ogawa and Wang 2013b) first appeared as a Discussion Paper of the Research Institute of Economy, Trade and Industry (RIETI) of Japan.

This article first appeared on www.VoxEU.org on January 19, 2014. Reproduced with permission.