Stability of Government Administration and the Real Economy

In 2016, both Japan and the United States are bracing for major political events. Japan has the House of Councillors (upper house) elections, while the United States will hold the presidential and Congressional elections. The outcomes of these elections could either boost government stability or increase political uncertainty.

Past empirical studies have shown that the increase of political instability or policy uncertainty could negatively affect the real economy (e.g., Julio and Youngsuk 2012; Baker, Bloom, and Davis 2015) (Note 1). This article examines how the outcomes of the elections in Japan and the United States could affect the respective government administrations.

Twisted relationship between the president and the U.S. Congress

The U.S. presidential election, which happens once every four years, will be held this year. It remains to be seen whether the Democratic Party will maintain its rule in 2017 and beyond, or whether the Republican Party returns to power for the first time in eight years. The outcome could also change the relationship between the president and the U.S. Congress.

In the 2014 midterm elections, the Republicans defeated the Democrats, gaining majority in both houses of Congress. This resolved the situation whereby different parties held the majority between the House and the Senate. Yet, the state of a "divided government," in which the party controlling the executive branch is different from the party controlling the legislative branch, continues to this day.

The divided government occurred several times over the post-war history of the U.S. Congress. Today's situation is far from unusual. However, with the confrontation between the two parties intensifying, the negative aspects of the divided government are beginning to emerge. The clash between the Democrats and the Republicans in the process of policymaking and their reluctance to compromise have led to a state of stalemate, stalling policy decisions. An unstable government administration makes the future outlook on government policies unclear.

The presidential election coincides with the U.S. Congress elections. One-third of the Senate seats are up for election, while all of the House seats are subject to the polls. Whether the instability of government administration decreases depends on the results of these elections. If the party of the executive branch also gains a majority in both houses, in a state known as "unified government," the new president can enjoy stable government administration.

As for Japan, there will be upper house elections this summer for the first time in three years. There are two potential outcomes for these elections. The first possibility is for the ruling coalition to win more than half of the seats (122) to retain a majority. The ruling coalition has 76 seats uncontested and 59 seats contested this time. To gain a majority, the coalition must win at least 46 (= 122-76) seats.

As explained about the United States, the state of a divided parliament between the two houses poses difficulty in government administration, as shown by data. The figure below shows the changes in Japan's instability index for government administration, compiled based on each of the political parties' support ratings in the opinion polls carried out by newspaper companies and other news organizations (1978-2014 = 100) (Note 2). The data cover the period from June 1978 to December 2015. The greater the index figure is, the more unstable is the government administration. 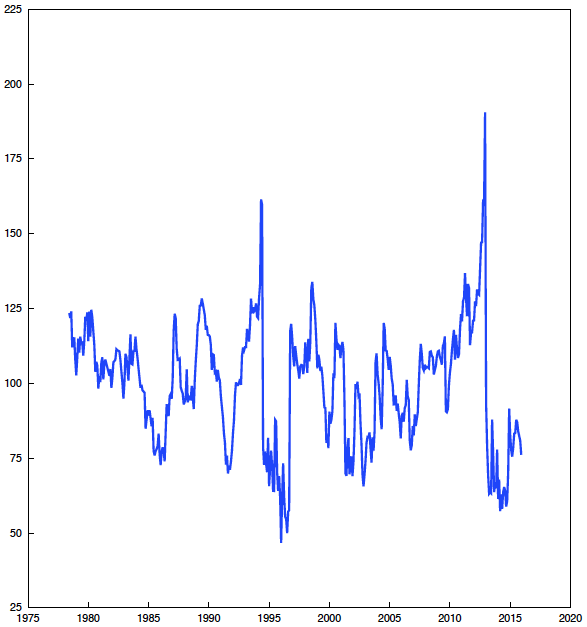 The index has dropped dramatically since 1999 when the LDP made a decision to form a coalition with the Komeito Party and several other political parties. This allowed the coalition to secure the majority seats in the upper house, reducing the instability of government administration. This is clearly illustrated by the fluctuation of the index.

At the same time, the index stayed relatively steady for several years after the 2007 elections (Note 3). One factor that created the difference between these two post-election periods is the emergence of the two-party political landscape. With the decrease in the number of political parties in the upper house for potential partnerships, it became more difficult than before for a ruling party to secure majority seats. The difficulty in government administration was more serious in 2007 than in 1998.

2016 coincides with the cycle of the ninth year jinx. If the ninth year jinx strikes again this time, there could be a divided parliament between the upper and lower houses. This would make government administration more difficult than present, which serves as a negative factor toward economic activities.