Many corporate executives despise government policies with no clear direction as the transparency of the economic outlook gets compromised. This article examines how the level of economic transparency has been changing over the last 30 years as a result of government policies, and posits that the current level of economic uncertainty is reaching the level previously recorded immediately after major political or economic events. The economic uncertainty index for June 2016, based on newspaper articles, approached the level experienced after the 1997 Asian financial crisis, 1998 "Twisted Diet" period with different parties controlling the Upper and Lower Houses, 2008 collapse of Lehman Brothers, and 2011 debt-ceiling crisis in the United States. According to our recent research results, this level of increased economic uncertainty could reduce the nation's overall economic activities and employment by 1.2% and 0.1% respectively over the next 12 months. This scale is equivalent to one-third of the worst level seen in economic recessions over the last 20 years.

Quantifying the degree of uncertainty based on newspaper articles

Economic uncertainty attributable to government policies cannot be directly observed, and must be measured with proxy indicators that represent it indirectly.

Behind the approach of using newspaper articles lies the observation that, when household and corporate spending are exposed to a high level of economic uncertainty, newspapers tend to carry related articles at a substantially high frequency.

The monthly index in the United States, which began in January 1985, is compiled with month-by-month searches of 10 major newspapers including USA Today and Wall Street Journal for articles containing the terms "economic," "economy," "uncertain," "uncertainty" as well as policy-related terms such as "Congress," "deficit," "Federal Reserve," "legislation," "regulations" and "White House."

Tasks remaining in the Japanese index

The project used the same method to compile indices for 16 countries and regions including Japan and Europe. For Japan, the monthly indices from June 1988 to April 2016 have been released.

However, the indexing process involved several issues. The first was the need to increase the number of newspapers from which to collect data. The Japanese index was based on articles carried in the Asahi and Yomiuri newspapers. Collecting data from a greater number of newspapers would reduce the effect of noise from individual newspapers' data series on the final index.

The second issue was the selection of terms used to search the database of articles for those concerning economic uncertainty. The monthly indices obtained were based on the Japanese word "keizai," which corresponds to "economic" and "economy," and the words "futomei" and "fukakujitsu" as the equivalents to "uncertain" and "uncertainty." However, the selection of these terms did not involve careful research on newspaper articles. There was a possibility that terms commonly used in articles may have been overlooked.

The third issue was the lack of indices specific to policy categories. For example, in the United States, the project prepared not only the overall index but also indices for 11 policy categories including fiscal policy, financial policy, regulatory policy, and trade policy. The availability of category-specific indices allows the examination of the types of policies that have a greater impact on economic uncertainty at any given time, or how the correlation between uncertainty and economic activities varies between different categories.

The joint research project among the EPU Project, the International Monetary Fund (IMF) Regional Office for Asia and the Pacific, and RIETI has addressed these issues as part of their research activities to substantially improve existing indices (Note 2). The following are the provisional outcome of such efforts for the overall index.

Characteristics of the new index

Figure 1 shows a new improved index, based on monthly data. The data sampling period was from January 1987 to August 2016, but the August index was based on data from the 1st to the 16th of the month. The greater the index figure is, the higher the degree of uncertainty becomes. 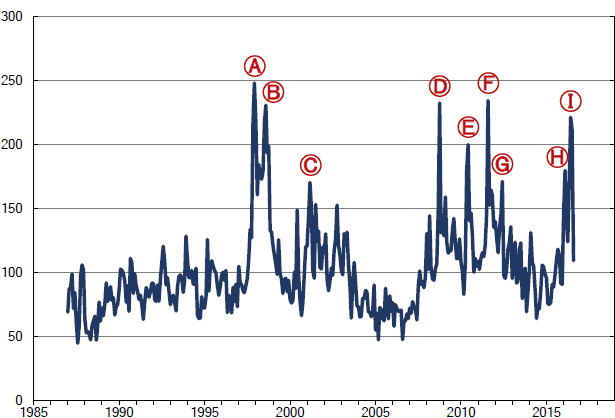 These terms have been selected after carefully examining some 1,300 articles featured in the Japanese and English editions of the Mainichi, Yomiuri, and Nikkei newspapers from January 1987 to March 2016.

More recently, the new index shot up in May and, in June, reached the level experienced after the 1997 Asian financial crisis, 1998 "Twisted Diet," 2008 collapse of Lehman Brothers, and 2011 debt-ceiling crisis in the United States. The index remained high in July, but has since come down to the late 2015 level this month.

Figure 2 compares the indices for Japan, United States, and Europe. The data sampling period is from January 1987 to July 2016. While the U.S. and European indices reached very high levels at the time of the 9/11 terrorist attacks in the United States in 2001 and the Iraq War in 2003, the Japanese index remained low at these times. 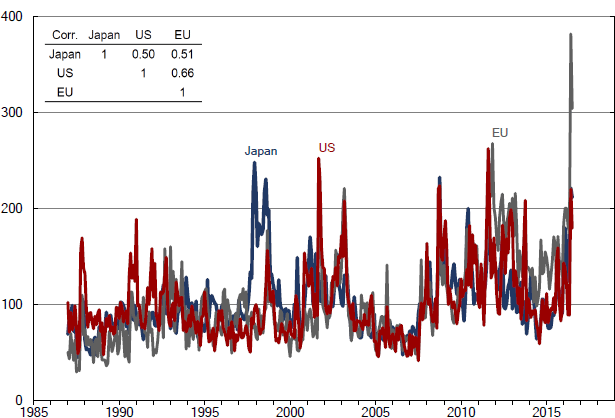 Figure 3 shows the economic activity index obtained by estimating the monthly vector auto regressive (VAR) model and the dynamic response of payroll employment, in order to examine the quantitative correlation between policy-induced economic uncertainty and the real economy. This is expressed as the impulse response function with a 65-point positive shock on the new index. Sixty-five points represent the size equivalent to the difference between the 2011-2012 average (when the index rose after the global financial crisis) and the 2005-2006 average (when the index was low before the global financial crisis).

Following a shock, the nation's overall economic activities drop by 0.8% over one year. Accordingly, the increase in economic uncertainty in Japan from May to June (approx. 100 points) is estimated to decrease the nation's overall economic activities over the next 12 months by 1.2% (= 0.8*100/65). It is also estimated to reduce payroll employment by 0.1%. These impacts are not very large, equivalent to one-third of the worst level seen in economic recession over the last 20 years.

Authors' note: The views expressed in this column are those of the authors and should not be attributed to the IMF, its Executive Board, or its management.