Economic Relations between Japan and China in 2016

The New Year season has gone and the Chinese New Year (Spring Festival) is soon approaching. According to estimates by the Japan National Tourism Organization (JNTO), approximately 360,000 Chinese tourists visited Japan in February 2015, presumably taking advantage of the Spring Festival holiday, and spent more than 100 billion yen. It is expected that this year's Spring Festival holiday, which runs from February 7 to 13, will also see a massive influx of tourists from China, including three of my friends and their families. As such, people-to-people interactions are growing through tourism. However, the overall economic relations between the two countries have been in a stalemate since 2010, due partly to the dispute over the islands in the East China Sea.

Index of the Japan-China relationship

As shown in Figure 1, the Japan-China relationship improved significantly following the normalization of diplomatic ties in 1972, and the positive trend continued through the end of the 1990s. The bilateral relationship deteriorated with then Prime Minister Junichiro Koizumi's visit to Yasukuni Shrine in 2001 and an upheaval of anti-Japanese demonstrations in China in 2005. Things began to improve in 2006, but the bilateral relationship was once again exacerbated by the 2010 ship collision incident at the disputed islands. As of 2014, the index of the Japan-China relationship stood at -4.86, a level observed prior to the 1972 normalization of the bilateral diplomatic ties (Note 2 ). Needless to say, no simple comparison is possible as the interdependence between the two countries observed today is completely different from how it was 40 years ago. Still, the index suggests how seriously the Japan-China relationship has been strained over the years. In contrast, China has improved its relationships with the United Kingdom, France, Russia, and South Korea from 2000 onward and with the United States in more recent years. 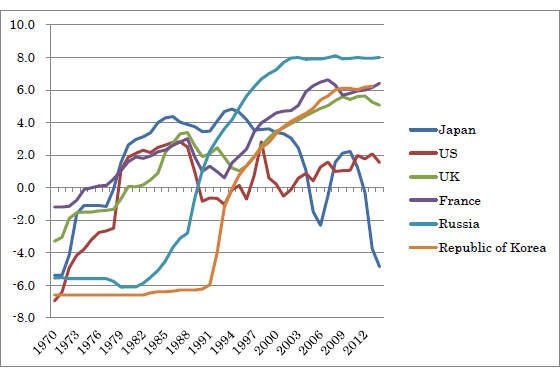 Source: Created by the author based on data provided on the website of Tsinghua University's Institute of Modern International Relations.

Economic impact of the Japan-China relationship

Although political relations between Japan and China began to be strained in the first half of the 2000s, the impact on economic activities was not so significant because economic ties between the two countries remained strong. This is what has been referred to as "cold politics and warm economic relations." However, due partly to soaring labor costs and an economic slowdown in China in more recent years, the deterioration of political relations from 2010 onward has had an evident impact on economic activities. With Japan-China trade plateauing and the flows of Japanese direct investment on a decline, the bilateral relationship has fallen into the state of "cold politics and cold economic relations."

Japan's exports to China in September 2012, the month in which the Japanese government announced the nationalization of the disputed islands, dropped 14.1% year on year. Using the original monthly data for the aforementioned index of the Japan-China relationship, Yang and Tang (2014) showed that the heightened political tensions resulting from the nationalization had a significant impact on Japanese automakers' sales in China. The findings were confirmed by the Granger causality test. Meanwhile, Heilmann (2015) found that a boycott and a sharp drop in demand for Japanese products in response to the nationalization dampened Japanese exports to China by 2.69% in 2012, dealing a particularly heavy blow to consumer products such as automobiles which suffered a hefty yearly drop of 32.3%.

In November 2014, after a hiatus of two years and five months, an ice-breaking Japan-China summit meeting was held in Beijing, which marked the first-ever formal face-to-face talks between Chinese President Xi Jinping and Japanese Prime Minister Shinzo Abe, finally showing signs for improvement. Against this backdrop, RIETI held a special seminar to discuss the challenges and future directions of Japan-China economic relations (Note 4). In order to improve the Japan-China relationship, various efforts must be made in political, economic, and social spheres (Todo, 2014). For the time being, the two countries are expected to boost political, cultural, and personal exchanges. However, the two countries still have a long and tough way to go before achieving an across-the-board progress in the spheres of politics and security.

As the first step toward deepening their economic relations, Japan and China should vigorously promote the establishment of the Regional Comprehensive Economic Partnership (RCEP). Although the importance and necessity of the RCEP have already been pointed out by many researchers and policymakers, I would like to emphasize the need to accelerate the move toward the establishment of the RCEP. The conclusion of negotiations on the Trans-Pacific Partnership Agreement (TPP) in October 2015 made big headlines in China. As far as I know, most researchers and policymakers in China, based on what they have witnessed after China's accession to the World Trade Organization (WTO), share the view that trade liberalization serves China's national interest as it promotes the structural changes of the domestic economy including the reform of state-owned enterprises, and support regional trade liberalization frameworks such as the RCEP and the TPP. The formal signing ceremony of the TPP Agreement is to take place on February 4, 2016. One effective way to achieve trade liberalization is to vigorously push forward with RCEP negotiations by seizing the momentum created by the TPP.

In the Japan-China summit meeting in November 2015, the two leaders agreed to resume the Japan-China High-Level Economic Dialogue, holding a ministerial-level meeting in Japan at an early date in 2016. If realized, it will mark the first meeting in about five and a half years, and it is strongly hoped that the two countries will take this opportunity to promote economic and industrial cooperation and RCEP-related consultations. This year, Japan will be hosting a trilateral summit of Japan, China, and South Korea. If this serves as an occasion to improve political relations among the three countries, we can expect to see a further acceleration in the moves toward the RCEP and a Japan-China-Korea free trade agreement as well as improvement in the bilateral relationship, including economic relations, between Japan and China.