China as Number One - The Day When China's GDP Surpasses that of the U.S.

Since shifting to an open-door and reform policy in the late 1970s, China has entered a period of high economic growth. Observers now predict that before long it will surpass the United States in terms of gross domestic product (GDP) to become the world's leading economic power. While the difference between the real growth rates of the two countries will certainly play a role in this shift, it will also greatly depend on the future course of the yuan/dollar rate. Indeed, if we look at the process whereby Japan caught up with the United States, exchange rate adjustment in the form of an appreciation of the yen against the dollar played a more important role than the disparity in real growth rates, particularly in the later stage. By 1987, the year when Japanese per capita GDP exceeded that of the United States for the first time, Japan's high-growth era had been over for more than a decade.

Despite an average annual growth rate of nearly 10% since the late 1970s, per capita GDP in China is still under $1000, substantially lower than that of the United States of $34,000. In addition to the very low per capita GDP level when the reform process started, this phenomenon can largely be attributed to the fact that the yuan has depreciated sharply over this period. Compared to a yuan/dollar rate of 1.68 in 1978, the yuan now stands at around 8.28 against the dollar, or an 80% drop in value. The yuan has lost value not just in nominal terms, but also in real terms after adjusting for the differential between inflation rates at home and abroad (Figure 1). This is reflected in the fact that the ratio of China's GDP to that of the United States, both measured in terms of the dollar, has stayed at a low level of about 10%. (Figure 2).

Why then has the yuan been so weak? One may be tempted to interpret the continued fall in value of the yuan as the result of a policy by the Chinese government to maintain an artificially low exchange rate to boost exports. Yet, even if the government could control the nominal rate, the real rate is more than likely to be decided by economic fundamentals. Lowering the nominal exchange rate would lead to a rise in inflation and would not necessarily bring about a drop in the exchange rate in real terms.

Second, if we further divide traded goods into imports and exports, the real exchange rate is also dependent on the relative price of exports (a part of domestic production) to imports (a part of overseas production), in other words, the terms of trade. Other things being equal, an improvement in the terms of trade results in a rise in the real exchange rate.

Nevertheless, the Balassa-Samuelson effect has not been observed in the case of China. Despite a high rate of growth, the nominal exchange rate of the yuan against the dollar has fallen more than to compensate for higher inflation in China than in the United States, so that the real exchange rate has also shown a substantial fall. This can be attributed to the existence of several hundred million excess laborers in the countryside, so that rising productivity in the traded goods sector has not been translated into a significant increase in real wages.

At the same time, changes in the terms of trade in China are having a negative effect on the real exchange rate. As a result of the open-door and reform policy started at the end of the 1970s, the country has been gradually integrated into the global economy according to comparative advantage. China's comparative advantage undoubtedly lies in its abundant supply of labor. China's industrialization therefore increases the supply of labor-intensive goods to international markets while raising the demand for capital- and technology-intensive goods, leading to a decline in the prices of the former relative to the latter. This implies a worsening of China's terms of trade (that is, a decline in export prices relative to import prices). Since exports are part of domestic production, while imports are part of foreign production, the deterioration in the terms of trade drags down China's real exchange rate. We should therefore see the weak yuan, not as a source of international competitiveness of Chinese products, but as evidence of China's lack of export competitiveness.

The above analysis suggests that the Chinese currency will start to appreciate in real terms if either or both of the following two conditions are met. First, if the excess rural labor comes to be completely absorbed by the industrial sector, any rise in productivity could translate into an increase in real overall wages, and thus a rise in the real exchange rate. Second, in the course of industrial advancement, if China starts to export less labor-intensive goods while substituting imports of technology-intensive goods by domestic production, China's terms of trade will improve, pushing up the yuan with it.

China's GDP is currently $1.08 trillion, about a tenth of the United State's $9.87 trillion. Assuming constant prices and a fixed yuan/dollar, and that China and the United States continue to grow at 8% and 3% per annum, respectively, it would take 46 years for China to surpass the United States in terms of GDP. If sooner or later the downward trend of the yuan against the dollar turns into an upward trend, however, this catching up process would be shortened significantly. 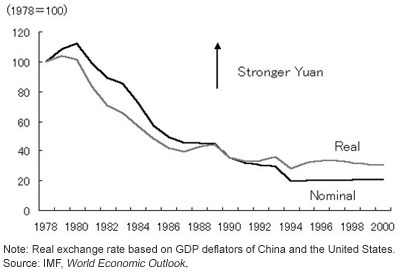 Figure 2. Relative Nominal GDP among China, the U.S. and Japan 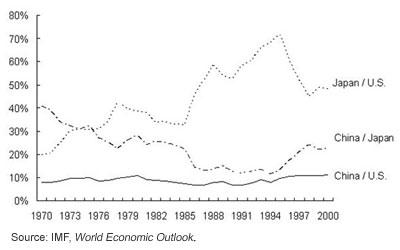 * Originally published in China in Transition (Japanese) on November 12, 2001