Rethinking the Government's Policy for Small and Medium-sized Enterprises: Make a clear distinction between emergency measures and support measures in normal times

Small and medium-sized enterprises (SMEs) are the cornerstone of the Japanese economy and should be supported by government policy. Based on this general understanding, the government implemented various measures to help SMEs secure access to financing. The Act on Temporary Measures to Facilitate Financing for Small and Medium-sized Enterprises, etc. (hereinafter "SME Finance Facilitation Act"), which was brought into force in December 2009, is a typical example.

In this article, I will outline analytical findings on the effects of various finance support measures including the SME Finance Facilitation Act. Then, I will point to two phenomena caused by the continuation of emergency support measures in normal times—the weakening of banks' credit reallocation function and an increase in the number of SMEs that have no borrowings due mainly to a lack of demand for funds—as challenges facing the government authorities.

Japan has experienced two episodes of crisis involving a serious recession and credit tightening by banks in its recent history; first in 1997 when the banks' bad loan problem escalated to an intolerable level and then in the fall of 2008 following the collapse of Lehman Brothers. In order to deal with these emergencies, the government implemented three types of measures. What have been the effects of those measures?

First, in order to alleviate the negative impact of credit tightening by private-sector banks, government-affiliated financial institutions for SMEs set up or expanded financing facilities, including what is referred to as the "Safety Net Lending Program" designed to help SMEs adjust to sudden changes in the business environment by availing capital and operating funds. In a research project headed by Chuo University Professor Tadanobu Nemoto, of which I am a member, we assessed the quantitative impact of the program, using data on lending by the SME Unit of the Japan Finance Corporation (JFC). We found that JFC loans made up for a decrease in lending by private-sector banks both in the late 1990s and in the latter half of the 2000s.

Second, the government introduced two massive credit facilitation programs—the Special Credit Guarantee Program (October 1998 through March 2001) and the Emergency Credit Guarantee Program (October 2008 through March 2011)—to provide 30 trillion yen or more worth of guarantees for loans to SMEs under each, applying much easier eligibility criteria and lower fees for guarantees than would be applied in normal times. Our analysis of firm-level data including information regarding the use or non-use of government-sponsored credit guarantee found that both of the above programs had a positive impact on user firms' access to financing.

Third, under the SME Finance Facilitation Act, which was in force from December 2009 through March 2013, banks were obliged to make efforts to allow SMEs to reschedule their loan repayments. The public has been concerned about its effectiveness since it was an extraordinary move by the government to urge banks to modify loan terms, which are supposed to be negotiated between lenders and borrowers at their own volition. Actually, during the applicable period, more than four million outstanding loans to SMEs were rescheduled to extend the repayment period. The Financial Services Agency (FSA) estimates that a total of 300,000-400,000 SME borrowers had their debts rescheduled.

In a bid to examine the subsequent performance of those SMEs, RIETI conducted a survey of sampled SMEs in October 2014, using a questionnaire developed by my research team. The questionnaire included a question asking whether the respondent has had its debt reworked, and responses were received from approximately 6,000 SMEs. The results of this survey show that the SME Finance Facilitation Act has had two positive effects, i.e., psychological relief that comes from knowing the possibility of debt renegotiations and actual improvement in cash flows resulting from debt rescheduling. Roughly 10% of the respondents said that they felt less uncomfortable asking banks to provide stop-gap financing after the implementation of the law. Further, more than 50% of those SMEs that had their debts reworked after the implementation of the law acknowledge that they would have gone bankrupt or out of business if it were not for debt rescheduling (see Figure).

Figure: What would have happened without debt rescheduling?
(Responses by SMEs that had their debts reworked) 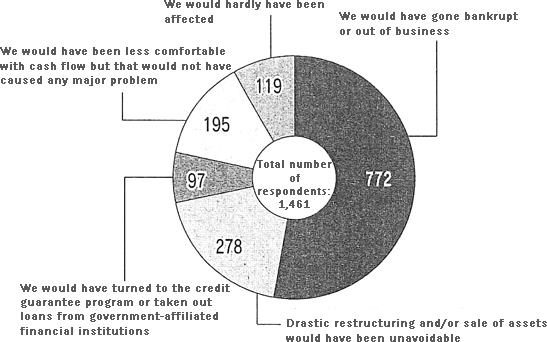 Furthermore, the business confidence of those SMEs that took advantage of debt rescheduling improved by just as much as that of those that had no need to ask for changes to their loan terms.

Findings from our analysis thus far indicate that the SME finance facilitation measurers implemented by the government have been effective in improving SMEs' cash flow. However, the big problem is that the effects of various measures, which had been implemented to address emergency situations, are continuing today, years after the crisis ended.

First, the tendency to provide long-term loans as an emergency measure was strengthened over the years. For instance, the maximum length of loans covered by credit guarantee contracts under the Special Credit Guarantee Program was seven years but extended to 10 years under the Emergency Credit Guarantee Program. Such a long-term guarantee may be justifiable when loans are intended to finance fixed capital investments or other projects where a long-term repayment period is naturally assumed. However, guaranteed loans that had been made available for use as operating funds no longer should be necessary now that the crisis is over.

Second, measures almost identical to those implemented in times of crisis are kept in place. For instance, although the SME Finance Facilitation Act expired at the end of March 2013, the FSA's inspection manual for financial institutions explicitly calls for banks' efforts to facilitate financing to SMEs and modify lending conditions as appropriate. Banks, for their part, have agreed among themselves to respond sincerely to borrowers' request for debt rescheduling.

Here, I would like to introduce findings from my joint study with Kyoto Sangyo University Associate Professor Koji Sakai. Using firm-level data collected in the government's quarterly survey on the financial statements of corporations for the period since 1980, we divided the respondents into two groups, i.e., companies that increased their borrowings and those that decreased their borrowings. Then, we aggregated changes in the amount of debt for each group and examined the extent to which funds were reallocated across companies to add up to such changes.

Even where the total amount of debt held by all companies hardly changed, the presence of companies that increased borrowings drastically on one hand and those that reduced borrowings by an equally large margin on the other would translate into a considerable magnitude of fund reallocation. A closer look at such magnitude by size of companies reveals that the magnitude of fund reallocation for SMEs was significantly smaller in the 1990s and 2000s than in the 1980s. We also found that the magnitude of reallocation for SMEs has been modest compared to that for large companies. In recent years, there has been a strong tendency for SMEs to continue to borrow by having their loans rolled over, as compared to their larger counterparts. As such, bank's liquidity reallocation function has weakened. Presumably, one reason behind this is the above-explained SME support measures implemented in recent years, which were quite tolerant of continuous borrowing.

The second notable phenomenon is an increase in the number of SMEs that have no borrowings from banks. According to a study conducted by Nihon University Professor Daisuke Tsuruta using data obtained in the government's annual survey on the financial statistics of corporations, the percentage of debt-free companies increased from 27% in 2001 to 38% in 2009. In particular, among small companies with 20 or less employees, more than 40% are found to be debt-free. Typically, those companies have high liquidity—as measured in the cash ratio or the level of cash flow—and low growth potential, and hence they have little demand for external funds. This is believed to be the reason behind their tendency of not taking out any loans. We can see that SME support measures designed to facilitate access to long-term loans or the rollover of loans have failed to stimulate demand from potential borrowers.

Based on what I have discussed above, what improvements can be made to realize more effective finance facilitation measures for SMEs?

First, we must make a clear distinction between emergency measures taken in times of crisis and support measures implemented in normal times. What is important in addressing emergency situations is to provide sufficient liquidity to enable companies to ride through a sudden and severe economic recession, that is, to avail operating funds for a period of two to three years. By clearly differentiating the nature of emergency measures from that of support measures taken during normal times, which would include the facilitation of access to long-term loans, we can avoid a potential situation where extraordinary measures taken to cope with a specific crisis could affect the efficient distribution of funds in normal times.

Second, it is important to focus on measures to stimulate new demand for funds. Indeed, there is not much room to boost SMEs' demand for funds as Japan's population is shrinking, and they face many constraints in advancing into overseas markets. However, a series of measures designed to generate new demand for funds—i.e., collateral-free loans to companies not in possession of real property, business improvement support for companies with rescheduled loans, and targeted support for companies that have yet to establish a trusted (long-term) relationship with their banks—also will be viable as a means to facilitate SMEs' access to finance.