Finance ministers and central bank governors from the G20 major economies met in Shanghai on February 26-27, 2016. The discussion at the meeting centered on the growing uncertainty of global financial markets, that was triggered by plunges in stock prices on the Shanghai Stock Exchange (SSE) since the beginning of this year. Addressing the downside risk to the global economy, the ministers and governors pledged to "use all policy tools—monetary, fiscally, and structurally—individually and collectively" to support growth, while reaffirming that countries should "refrain from competitive devaluations."

By the end of February 2016, the SSE Composite Index fell by nearly 50% from its peak recorded in June 2015 (see Figure). Japan's Nikkei 225 stock index dropped by more than 15% during the first two months of 2016, and European and New York markets have since been experiencing bear markets. The China-triggered financial turbulence is casting a shadow over the future course of the world economy.

Capital flight from emerging economies started as early as 2013 when the U.S. Federal Reserve began discussing the possibility of tapering its unconventional monetary policy measures such as quantitative easing and zero interest rate policy. Then, in 2014, came a slowdown in the Chinese economy and a sharp fall in crude oil prices, throwing the emerging economies—in particular those that are heavily dependent on natural resources exports—into deeper trouble.

After the SSE took a downward turn in the summer of 2015, the renminbi (RMB) came under significant selling pressure, prompting the Chinese monetary authorities to intervene in the foreign exchange market, buying the RMB and selling the U.S. dollar. As a result, China's foreign exchange reserves dropped from $3.9 trillion at the end of 2014 to $3.2 trillion at the end of January 2016. In the recent two months of December 2015 and January 2016 alone, foreign currencies worth more than $200 billion flew out of China.

Thus, at the moment, China is making desperate efforts to arrest the rapid depreciation of the RMB, rather than trying to drive down the value of its currency to improve the competitiveness of exports—which is what the country had been often claimed to be doing for some time. In the background of the drop in the RMB value lie a host of structural problems, which include excessive investment by state-owned enterprises (SOEs), excessive lending by banks, inefficient allocations of resources, a shrinking working population, low labor productivity, and rising production costs.

However, the biggest problem facing China today is mutual distrust between the regulatory authorities and the markets. Having made remarkable progress in liberalizing its economy, China is no longer immune to market turbulence, but this new reality seems not to be fully embraced by the regulatory authorities. They have been trying to constrain the behavior of specific big investors and forcing SOEs to purchase shares of their listed subsidiaries from the market, believing that they can control asset prices through market interventions. Bewildered and disappointed by such arbitrary and non-transparent interventions, market participants are losing their faith in the Chinese stock markets, driving further capital outflow from the country.

Obviously, these market interventions and price manipulations contradict the direction of a financial system envisaged by the Chinese government as a long-term goal. In November 2015, the International Monetary Fund (IMF) decided to include the RMB in the basket of currencies that make up the IMF's Special Drawing Rights (SDR). For the Chinese authorities, this is more than just a matter of honor. It is also meant to be a pledge to the world of China's determination to proceed with financial liberalization, which they hope will give them leverage to urge the domestic financial industry to implement more drastic reforms.

According to the hypothesis of the "impossible trinity" or the "monetary trilemma," a country can simultaneously pursue two, but not all, of the following three policy positions: 1) free capital movement, 2) independent monetary policy, and 3) stable foreign exchange rate.

If China continues with financial market liberalization and maintains autonomy over monetary policy with the People's Bank of China (PBOC) setting the policy interest rate at its sole discretion, the demand for the RMB and its exchanges rates with other major currencies would fluctuate, depending on how the country's interest rates diverge from those of other major countries. Conversely, if China wants to stabilize its exchange rates, it needs to keep its policy interest rate at the same level as those of other major-currency countries (e.g., United States), but has to give up its monetary policy independence. If neither of the above options is acceptable, China is left with just one choice, i.e., closing its financial markets to the rest of the world so that it can retain monetary policy independence and exchange rate stability.

As the world's second largest economy, China may as well prefer pursuing independent monetary policy, open financial markets, and a flexible exchange rate regime. Indeed, achieving all of them is more than just a long-term goal but is also a prerequisite as the issuer of an SDR basket currency. But that is not what has happened in reality. When the RMB faced appreciation pressure in the past, the Chinese monetary authorities aggressively intervened in the foreign exchange market—buying the dollar and selling the RMB—so as to stabilize the exchange rate. This enabled China to maintain its monetary policy independence while liberalizing the financial markets in a step-by-step manner. Consequently, China's foreign reserves rose to nearly $4 trillion.

However, once the RMB started facing depreciation pressure as seen more recently, the monetary authorities' interventions in the market—i.e., buying the RMB and selling the dollar—have resulted in a rapid depletion of foreign reserves. In addition, non-transparent and arbitrary interventions by the monetary authorities have generated distrust among market participants, driving more capital outflows from China and fueling expectations for a weaker RMB. This, in turn, has prompted even more investors to pull their money out of the country to avoid exchange losses, thereby creating a vicious cycle.

Now, what would happen if the monetary authorities stopped interventions and immediately adopted a floating exchange rate regime? This would let China at least fulfill its responsibility as an issuer of an SDR currency. Also, the move is consistent with the long-term direction of further financial liberalization. However, given the reality that China is riddled with structural problems with uncertainty hanging over the future course of its economy, a steep decline in the RMB would be unavoidable. This would deepen, rather than alleviate, the already profound financial uncertainty, because a sharp RMB depreciation would increase the debt burden of Chinese enterprises with dollar-denominated debt. This would lead the monetary authorities to intervene in the markets anyway, but that would only help deplete foreign reserves and thereby further destabilize the market.

Thus, in order to stabilize the RMB and dispel the financial uncertainty, China has no other choice but to stop capital outflows through capital controls. Implementing temporary but comprehensive capital controls would prove to be more effective than continuing to intervene in the currency market in a non-transparent manner. Speaking at the annual meeting of the World Economic Forum in January 2016 in Davos, Switzerland, Bank of Japan (BOJ) Governor Haruhiko Kuroda said, "Capital controls could be useful to manage [China's] exchange rate." Indeed, at the time of the Asian financial crisis in 1997 and 1998, Malaysia managed to avoid the worst by imposing capital controls.

Over the past year and a half, capital to the tune of $800 billion has flown out of China. Given that, even the world's largest foreign reserves totaling $3.2 trillion may not be enough. The sheer size of the Chinese economy, which is greater than that of all of the crisis-hit Asian economies—i.e., South Korea, Thailand, Indonesia, Malaysia, etc.—combined, spells that the cost of a Chinese financial crisis would be immeasurable. Blocking the outflow of capital is the only way to remove the swirling uncertainty.

Having just been admitted into the SDR league, China would find it embarrassing to reintroduce capital controls, which is probably the reason why it continues to cling to opaque market interventions. But then, Japan, the United States, and the European Union can and should take a lead to create an international consensus that stemming the bleeding of the Chinese financial markets with temporary capital controls is good for the world economy.

For advanced economies, the financial uncertainty in China is not a fire on the other side of the river. In Japan, the BOJ introduced negative interest rates effective from February 16, 2016. The prevailing reaction at the moment is a rather pessimistic one because of anxiety over how this bodes for the future and the fear of the unknown effects of this unprecedented monetary policy.

European countries are in similar straits. Negative interest rates policies have been implemented in the euro zone, Denmark, Sweden, and Switzerland, but their effects remain unknown. As to measures on the fiscal side, it would be difficult for them to shift from austerity in a big way, leaving them with very few—if any—policy options to lift the economy. Things are not much different in the United States. In the event of an economic downturn, the Federal Reserve can lower the policy interest rate to stimulate the economy, but is left with very little room to lower the already extremely low interest rate. With the U.S. presidential election coming later this year, it would be politically difficult to come up with a major fiscal stimulus package. Financial uncertainty must be dispelled before the world economy slides into recession.

The IMF traditionally has been uncompromising on its stance that capital controls are bad and financial liberalization is good. More recently, however, it has come to tolerate or even promote temporary capital controls if its purpose is to secure macroeconomic stability.

Instead of becoming locked in the vicious cycle of non-transparent market interventions and uncertainty-driven capital outflows, China should implement capital controls in a way that is acceptable to the international community, which is the best way to stabilize financial markets. In doing so, China's status as an issuer of an SDR currency will serve as collateral. Since China does not want to give up its seat in the SDR league, it would not change its direction toward financial liberalization as its medium- to long-term goal, even if it implements capital controls over a short-term period. The international community should take advantage of this to persuade China to stop the bleeding of its financial markets first by means of capital controls. 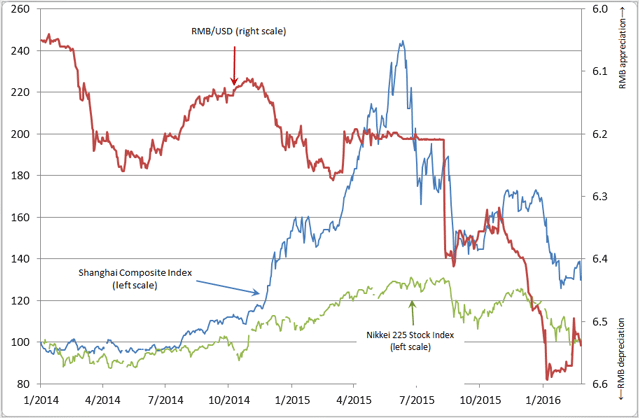