Japan's electrical machinery industry is suffering a notable downturn in its international competitiveness. According to the UN Comtrade Database, Japan accounted for 12.2% of the world's total export value in electrical machinery and equipment in 2000, but the share decreased to 4.4% in 2014. In contrast, South Korea and China increased their shares in export value in this industry from 4.7% each in 2000 to 5.8% and 24.3% respectively in 2014.

Japan's RCA in the electrical machinery industry dropped from 1.6 in 2000 to 1.1 in 2014, reducing the degree of comparative advantage. On the other hand, the RCA of South Korea and China rose from 1.7 to 1.8 and from 1.2 to 1.9 respectively over the same period, indicating a greater level of comparative advantage. In semiconductors, liquid crystal display (LCD) TVs, communications equipment, rechargeable batteries and other areas where Japanese firms traditionally have held strong international competitiveness due to its advanced technologies, South Korean firms have taken over, rapidly expanding their share in the international market in recent years.

We examine the background for the fall of Japanese firms' competitive edge against Korean firms in the electrical machinery industry.

A firm's competitiveness in the international market is defined by the firm's total factor productivity (TFP), which reflects its technology level, and the cost of its factors of production. When TFP growth of the firms in competing countries exceeds those of Japanese firms, or when production costs such as for labor fall below that in Japan, Japanese firms lose their international competitiveness.

The Figure shows the developments in the sales volume weighted average of TFP levels of Japanese and South Korean firms in the electrical machinery industry, as well as the TFP levels of the top and bottom 5% firms in TFP for each country in the industry, over the period of 1990-2010 (logarithmic values, 2000 as the reference year). Firms such as Ushio Inc., Fanuc Corporation, and Rohm Semiconductor are included in Japan's top group, while South Korean's top group includes Samsung Electronics and LG Display. 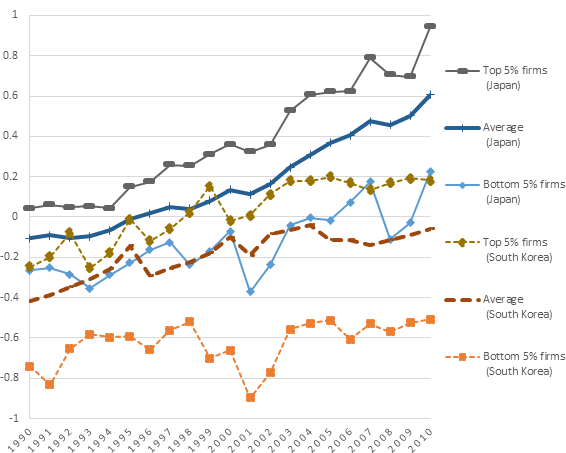 The TFP level of South Korea's top 5% firms, most of which are the leading firms in the country's exports, once exceeded the average TFP of Japanese firms in 1999. However, since then, Japanese firms have succeeded in enhancing their TFP through business restructuring and continuous research and development (R&D) investments. South Korean firms have lowered their R&D investments against net sales in this industry since 2004, resulting in slower TFP growth of the top 5% firms. Consequently, Japanese firms' average TFP exceeded that of South Korean firms by over 60% as of 2010.

South Korean firms reduced the cost of intermediate inputs at a rate of 5.0% per annum, resulting in the loss of Japanese firms' competitiveness by 3.0% per annum. An additional 0.5 percentage point drop in Japanese firms' international competitiveness drop that was attributable to cost factors came from South Korean firms' large real wage decrease. Behind South Korea's relative real wage decline lies not only the depreciation of the Korean won but also deflation in Japan keeping the real wages high.

Japanese firms have been making direct investments in East Asian countries to reduce the cost of intermediate inputs, but will now need to deepen their global supply chains. To this end, they are required to adopt advanced management methodology and production management technology to accommodate global procurement.

Japanese firms have overcome cost disadvantages by improving TFP. In view of the future economic outlook including the aging population, they must continue to improve their TFP levels.

One of the solutions would be to fully utilize cloud services which allow firms to use external sources such as software and equipment over networks. Cloud services are expected to substantially reduce the cost of information services which conventionally involved expensive hardware. Our research result found that only 30% of Japanese firms (20% of small and medium-sized firms) had adopted cloud services as of 2012, significantly lower than the 70% of U.S. firms (60% of small and medium-sized firms). Adopting cloud services has a potential to dramatically improve firm productivity.

In addition, Japanese firms should learn from the manufacturing firms in the other advanced countries in shifting toward the servification (selling products with service around it) to further increase TFP. Specifically, using artificial intelligence (AI) and big data, firms can deepen and improve automation system and streamline of operations, optimization of supply chain and manufacturing process, effective marketing, deployment of the solution business such as the operation and maintenance of transport infrastructures/offices, and so on.

Japanese firms have been left behind in an industry where the use of IT should have generated new values in the last global IT boom. In order to boost their international competitiveness through the challenges such as the shift from the product only to the product-with-service, Japanese firms must make bolder R&D investments in new business fields and adapt newer systems aggressively. Industry-academia collaboration is also essential to develop suitable human resources for this end.