The most notable feature of the news reports on the problem of supply chains following the Great East Japan Earthquake was that although major companies have promoted risk diversification in terms of component suppliers in light of their experience with the Niigata Chuetsu Earthquake, the source of parts production that those component suppliers procured was concentrated in the hands of a limited number of companies. This suggests that there was an unintended concentration of suppliers.

Economies of scale serve an important role in producing components whereby production becomes concentrated in the hands of a limited number of suppliers. Those suppliers were conceivably narrowed down to a few companies as components can be produced in large volume and supplied at a low price. Accordingly, customers of these companies are spread all over Japan and even all over the world. In order for components manufacturers to save on fixed costs by consolidating their production to a single location, transport costs in a broad sense have to be low enough to enable transactions with distant customers.

The idea that concentration naturally arises due to the comparative relationship between economies of scale and transport costs can be understood based on the mechanism of industrial agglomeration in spatial economics. Here, a decline in transport costs in a broad sense specifically means the development of a means of transportation and communication between domestic regions and globalization under which people, goods, and information move across borders on a global scale. The deepening of market integration has enabled the agglomeration of production activities that are both localized and connected to global markets.

However, it has now been shown that locations of such agglomerations have the risk of becoming a bottleneck in the global supply chain.

Due to disruptions of supply chains caused by the earthquake, production fell not only in the affected areas but also nationwide, with domestic automobile production from March to May this year being less than half of the corresponding period last year. Outside Japan, automobile production plummeted temporarily in areas where Japanese automakers have a large presence, such as Thailand and China's Guangdong Province, as it became difficult to obtain some auto parts in these locations (see Figure). 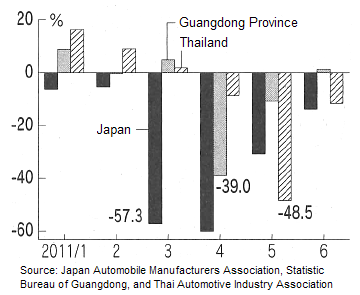 The agglomeration of production—particularly component suppliers—is caused by the interaction between buyers and sellers in the market: the price of a product falls with a decline in costs owing to an increase in the scale of production, causing more companies seeking to purchase it in order to improve productivity, which leads to a greater increase in production. Once such a concentration is formed, a certain level of change in environment does not undermine it. The existence of this lock-in effect is an important finding of spatial economics.

The recovery of affected component companies progressed ahead of schedule owing to arduous efforts by all parties involved, and supply chains are coming back to their original form ahead of expectations. Although this can be said to show precisely the lock-in effect, now after the earthquake, consideration should be given as to whether we should simply reconstruct the supply chains back to their previous state.

In extremely simplified terms, the transition of the Japanese manufacturing industry can be described as follows. By the 1970s, Japanese manufacturers had established an industrial structure in which a full range of manufacturing processes—from materials and parts production to mass-production of finished products—are undertaken in Japan. Overseas demand was captured through exports, bringing growth even to the upstream sectors. Subsequent industrial policy and national land planning promoted the dispersion of factories and plants to rural areas to sustain growth by mitigating the disadvantages caused by excessive concentration in urban areas.

During and after the latter half of the 1980s, as the value of the yen rose, factories and plants (mass production of export products) in rural areas were dispersed to East Asian countries. Although the manufacturing industry that remained in Japan maintains its export competitiveness through ingenious efforts—taking advantage of domestic industrial agglomerations—there are growing concerns about the hollowing out of this industry.

According to the White Paper on International Economy and Trade 2011, although the direct share of the manufacturing industry in the peripheral area in terms of exports is small, it indirectly participates in global supply chains through parts incorporated in products of other companies. In the areas affected by the earthquake, there are many companies supporting the Japanese manufacturing industry that started as mere subcontractors but grew into producers with R&D capability with their ability to make business proposals. Therefore, not only regional measures but also a policy for helping the entire Japanese manufacturing industry to sustain growth is required for supporting the recovery of the affected areas.

Akio Toyoda, President of Toyota Motor Corporation, said that the Japanese manufacturing industry was theoretically untenable since it faced six disadvantages: the rising value of the yen; the power supply problem following the earthquake; a high corporate tax rate; severe greenhouse gas reduction targets; high labor costs; and a delay in free trade agreement (FTA) negotiations. The export of intermediate goods from Japan has been growing in recent years, spurred by Asian industrialization. If other corporate executives hold similar views, causing the domestic industry to hollow out further and resulting in the degeneration of domestic manufacturing in Japan, it will become difficult to maintain technology, making inevitable the outflow of even product development and parts production from Japan.

The fact that the lock-in effect of agglomeration is based on the interaction in the market implies that dispersion occurs quickly once the feedback is reversed.

Mr. Toyoda was quoted as saying, "We will maintain domestic production even if we have to bite the bullet," and while there is still hope, the Japanese government must prepare quickly an environment in which manufacturing companies commit to long-term domestic production. This will greatly contribute to the recovery of the affected areas. Above all, instability in the power supply system poses a great risk in seeing a further hollowing out of the domestic industry. The government must hasten to guarantee the power supply for the time being and to present the roadmap for the transition to a sustainable system.

Following the Great East Japan Earthquake, we frequently hear the term "business continuity plan (BCP)." According to the study I am conducting at the Research Institute of Economy, Trade and Industry, there are successful examples of BCP after an earthquake, such as a case in which only a short-term suspension of supply resulted thanks to the successful operation of arrangements made earlier for alternate production in the company's own plants located in other areas or by other companies in the same sector.

For instance, as you can see in the figure, whereas in Japan the impact of reduced automobile production due to the disruptions in supply chains appeared immediately after the earthquake, automobile production suffered the sharpest decline in the month following the earthquake in Guangdong and after two months in Thailand. Auto and auto parts manufacturers managed risk in such a way that the farther they are from Japan, the more inventory of parts they had. This resulted in a time lag in impact, during which supply chains recovered to limit a reduction in production to a short period.

Owing to an enhanced awareness of BCP after the earthquake, the need to prepare for an emergency and physically disperse production has been underscored. Although the dispersion of production stabilizes supply chains for the whole industry involved and enhances its competitiveness, individual companies incur the cost of sacrificing economies of scale. If there is a large benefit for the entire industry, a policy encouraging cooperative behaviors of buyers and sellers is required. For instance, a specific measure is being considered to promote the standardization of auto parts by reducing excessive customization that focuses on individual needs.

Potential locations for plants and factories are not limited to areas within Japan, and East Asian countries—where risk factors are different and industrial agglomerations have already formed—will certainly be among the alternatives. Dispersion with awareness of its risk will not necessarily lead to a hollowing out of the Japanese manufacturing industry. Due not only to natural disasters but also potential conflicts stemming from complicated international relations in East Asia alongside unstable social conditions in those countries (with labor disputes and widening gaps), companies in other East Asian countries are not free from the risk of production suspension.

According to IHS iSuppli, a U.S. research company, about half of the world's production of DRAM, a type of semiconductor memory, is made in the vicinity of Seoul, and 58% of the world's production of small and medium LCD panels is conducted in Taiwan. Japan may benefit from being a pioneer if Japanese companies can demonstrate leadership ahead of other East Asian companies in addressing technological and organizational risk dispersion. Japan will then be able to serve as a destination of investment for risk-diversifying East Asian companies.

At present, Japan remains at a markedly low level among major advanced countries in accepting inward direct investment. It is important to positively accept East Asian companies trying to realize advanced technological innovation by taking advantage of the brand attraction of products made in Japan in the manufacturing industry.

Japan, which is now a society beset by a declining population, has to incorporate the vitality of the economies of Asia and other parts of the world. Support may be given via taxation benefits that reduce the cost of capital investment and employment for companies willing to realize high productivity commensurate with high personnel expenses in Japan regardless of their nationality. We hope that this earthquake will also be remembered as a turning point in deepening discussions on regional cooperation with a view to developing a multipolar distributed structure for risk sharing by all of East Asia.