"Macroeconomics can be broadly divided into two schools of thoughts: neoclassical economics and Keynesian economics."

This phenomenon reflects drastic changes in macroeconomics in the 1970s. The keyword here is "microfoundations."

As a specific example, consider the Phillips curve, which supposedly describes an inverse relationship between the rate of inflation and the rate of unemployment. Suppose that we examine macroeconomic data and find a Phillips curve relationship (P1 in Figure). However, we must not assume that policymakers can choose any specific point on the curve. 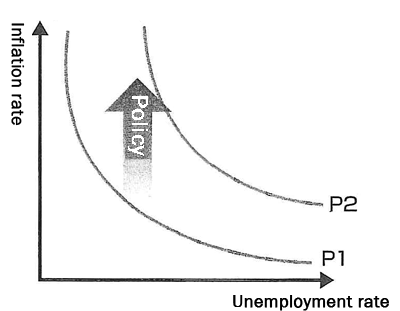 Source: Created by the author

For instance, the idea is clearly reflected in Robert Lucas' lecture note in 1987, in which he writes as follows: "The most interesting recent developments in macroeconomic theory seem to me describable as reincorporation of aggregative problems such as inflation and the business cycle within the general framework of 'microeconomic' theory. If these developments succeed, the term 'macroeconomic' will simply disappear from use." He then goes on to denounce Keynesian economics for surrendering to the temptation to "relieve the discomfort induced by discrepancies between theory and facts by saying that the ill-understood facts are the province of some other, different kind of economic theory." (pp. 107-108)

Based on this perspective, there is no dividing wall between microeconomics and macroeconomics. Dynamic stochastic general equilibrium (DSGE), a widely accepted modern macroeconomic theory, also follows the perspective and uses optimal individual behavior as the starting point of discussion. Therefore, how to explain the optimal behavior of various economic agents such as households and corporations is a central theme running through the DSGE literature and the focus of the graduate-level teaching of macroeconomics.

This trend led Lucas to declare victory over economic depression in his presidential address at the meeting of the American Economic Association in 2003. At the outset of his address, he said that macroeconomics' "central problem of depression prevention has been solved, for all practical purposes." However, five years later, the bankruptcy of Lehman Brothers, which triggered the worst financial crisis since the Great Depression in the 1930s, hit the world.

Now, let's take a look at microfoundations from the perspective of general equilibrium theory, which is said to have been completed by Kenneth Arrow and Gérard Debreu.

The general equilibrium theory is considered to be the backbone to the invisible hand, which states that a socially efficient state or equilibrium can be reached automatically when rational and self-interested individuals engage in price-based trading in the market. For many economists, it is a sort of bastion of thought.

The term "equilibrium" in the general equilibrium theory refers to a state in which there is neither excess demand nor excess supply in the market in an economy where each participant makes optimal decisions as to how many of which goods to buy or purchase at a given price, or a price at which such a state exists.

Both the uniqueness and stability of an equilibrium state can be proven under strict assumptions such as that all of the microeconomic agents are essentially the same (homogeneity). However, neither the uniqueness nor stability of the equilibrium is guaranteed under realistic assumptions, for instance, when economic agents are all different (heterogeneity). Metaphorically put, the "invisible hand" is not just invisible but does not exist.

It should be noted that the point here is not about whether real-world economic agents are rational or not, but that there is hardly anything that can be said for sure at the macroeconomic level even when they are assumed to be rational. In his 1986 paper, Arrow put this concisely as follows: "In the aggregate, the hypothesis of rational behavior has in general no implications." (S388)

If we are to accept this conclusion as is, it would throw the development of macroeconomics over the past several decades, in which individual rationality has been used as a microfoundation underpinning the validity of analysis, into question because serious problems in the very foundation seem to remain unaddressed. At least, it would be going too far to determine the validity of arguments based solely on the clarity of the underlying microfoundations, in the same manner as when Keynesian economic theories were abandoned.

A new vision of macroeconomics

Indeed, attempts have been made to explain various economic phenomena by taking different approaches, those outside the frameworks of DSGE and general equilibrium models. For instance, there are some studies that attempt to analyze prices by focusing on institutional factors such as laws, regulations, and customary practices, as compared to the general equilibrium approach in which the price mechanism for goods and that for wages are identical. Other attempts include those focusing on various forms of interactions between economic agents—particularly those other than the price mechanism—to explain business cycles and financial market panics, defining them as "collective phenomena."

Needless to say, these approaches are still in the stage of struggling to find an answer although various ideas are being proposed. Also, these attempts are incomplete and may look unspectacular, as they are not meant to explain everything with a single principle. However, I believe that a new vision of macroeconomics will emerge from such down-to-earth struggle.