An econophysics perspective of trade liberalisation

Econophysics is an emerging field applying theories and methods from physics to economic problems and data. This column explores the collective motions of trade and the effects of trade liberalisation, using global data from the past two decades. Econophysics methods reveal how business cycles synchronise, and how economic risk propagates throughout the global economic network. The results also highlight inherent problems of structural controllability that are induced during economic crises.

Editor's introduction: Since its inception over two centuries ago, economics has made substantial advances by incorporating insights and methods from other scientific disciplines. One emerging interdisciplinary field that has gained traction over the last two decades is econophysics, which applies theories and methods from physics to traditionally economic problems and data. This column presents one of the latest contributions to the field, applying theories of collective particle motions to global trade data.

Recent theoretical studies using coupled limit-cycle oscillator models (Note 1) suggest that the interaction terms due to international trade can be viewed as the origin of synchronisation (Pikovsky et al. 2001, Ikeda et al. 2013, 2014). We observed various kinds of collective motions (Note 2) for economic dynamics, such as synchronisation of business cycles on the giant economic complex network. The linkages between national economies play an important role in economic crises as well as in normal economic states. Once an economic crisis occurs in a certain country, the influence propagates instantaneously toward the rest of the world. A salient example is the Global Crisis triggered by the defaulting of subprime mortgage loans in 2007 and the subsequent bankruptcy of a major investment bank affected by devaluation of mortgage-backed securities and collateralised debt obligations in 2008. The global economic complex network might show characteristic collective motions even for smaller economic crises.

The World Input-Output Database has been developed to analyse the effects of globalisation on trade patterns across a wide set of countries (Timmer 2012). This database includes annual industry sector-specific international trade data on 41 countries and 35 industry sectors from 1995 to 2011, with 1,435 nodes in the international trade network. Figure 1 shows the temporal change in amplitude for the order parameter (Note 3), r(t), obtained from the analysis of the World Input-Output Database for 1996-2011. Phase coherence decreased gradually in the late 1990s but increased sharply in 2001 and 2002. The change in 2009 was caused by the financial crisis, following the housing bubble crash in the US. Order parameters (Note 4) are estimated for the growth rate of the value added time series shuffled randomly, but retaining autocorrelation (Iyetomi et al. 2011a, Iyetomi et al. 2011b) and averaged over 1000. The shuffled time series is plotted by the flat black curve at the bottom of the figure. The comparison shows that the average order parameter is evidently larger than the systematic error of the analysis method. Therefore, the synchronisation observed for each of the linked communities is statistically significant. 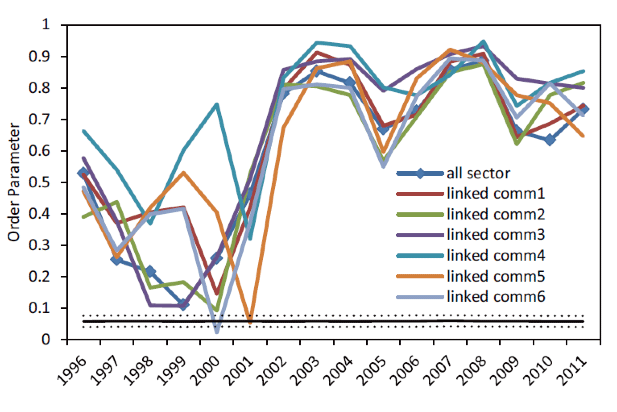 Notes: The temporal change in amplitude for the order parameter, r(t), obtained from the analysis of the World Input-Output Database, 1996-2011 is shown. Phase coherence decreased gradually in the late 1990s but increased sharply in 2001 and 2002. From 2002, the amplitudes for the order parameter remained high except for 2005 and 2009.

Propagation of economic crises on the global production network

We identified the community structure (Note 5) for each time slice of the global production network constructed from G7 Global Production Data. Figure 2 shows examples of community structures obtained for (a) 2004, (b) 2007, (c) 2010, and (d) 2013. The average value of modularity Qs (Note 6) is 0.302 in 2001 and 2013. The maximum and minimum modularity Qs are 0.410 and 0.153, respectively. This indicates that the community structure is clearly identified for the global production network. The number of major communities varies between two and four. There were two major communities for the global economic crises in 2007 and 2010. The number of major communities in normal economic periods (2004 and 2013) is larger than periods with economic crises (2007 and 2010). This can be interpreted as production for all industry sectors in G7 countries behaving similarly during economic crises. Economic risk propagates instantaneously to all industry sectors in G7 countries, and all industries look for new demand. Consequently, new links (trade relations) span beyond communities observed in normal economic periods. 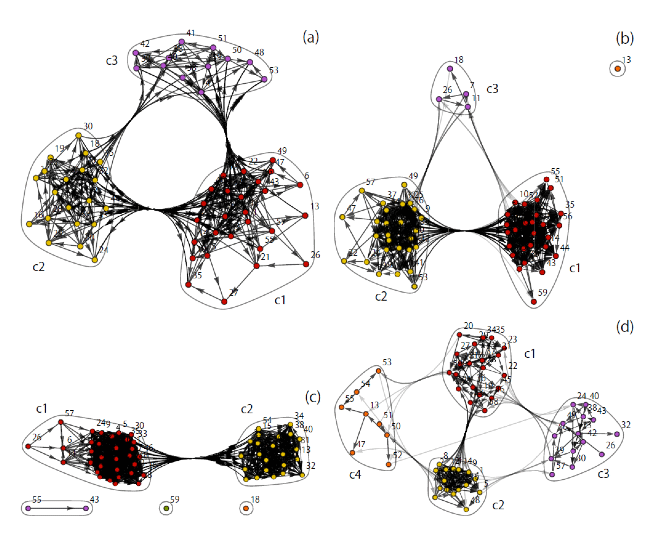 Controllability of the global production network

The observed increase in the number of driver nodes during economic crises can be explained qualitatively by the heterogeneity in terms of degree distribution (Note 11). This means that we cannot expect to control the global real economy by stimulating a relatively small number of nodes. Furthermore, it becomes more difficult to introduce a measure to control the state of the global economy during economic crises than during normal economic periods. 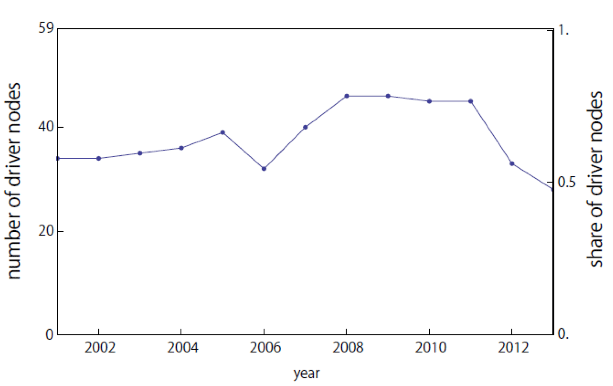 Through our analysis, we have observed various kinds of collective motions in the global economy under trade liberalisation:

Although many Japanese small and medium enterprises would achieve higher economic growth through free trade, we also need to pay attention to the fact that once negative economic shocks occur in a regional economy, they will propagate to the rest of the world instantaneously, with no strong measure of control during economic crises.

This article first appeared on www.VoxEU.org on July 22, 2016. Reproduced with permission.