Fixed and sunk costs are widely accepted as important determinants of export behaviour. This column argues that such costs may be shared by agglomerated collections of firms, and presents evidence of agglomeration's effects on exporting in China. Agglomeration is more effective in low-tech sectors and land-locked areas. Surprisingly, the effect of agglomeration is different for indigenous and foreign firms.

Policymakers in both developed and developing countries are beginning to recognise the importance of enlarging the mass of internationalised firms. Exporting allows firms in countries with small domestic markets to exploit economies of scale. In large emerging countries such as China, exporting exposes firms to advanced technology, which they can turn toward domestic innovation (see for example the case studies by Breznitz and Murphree 2011). Promoting the internationalisation of firms - especially among small and medium enterprises or in sectors facing severe import competition - can spread the benefits of economic globalisation. Exporting is known to be associated with substantial non-recoverable upfront costs, implying that only a subset of firms with sufficiently high productivity can profit from exporting. The essential part of such entry costs is often believed to be knowledge-intensive expenditures required to penetrate foreign markets, such as the establishment of distribution networks or the development of new products adapted to foreign consumers' tastes. If this is indeed the case, knowledge spillover from experienced exporters may reduce entry costs.

In our latest paper we exploit large firm-level data of Chinese manufacturing firms to assess whether an agglomeration of incumbent exporters contributes to the higher likelihood of new export entry by Chinese firms. Although the deepening of industrial agglomeration in China and its close interaction with China's exports are well documented (see for example Ge 2009 and Lu and Tao 2009), such knowledge spillover from agglomeration has not been explored.

Knowledge spillover is localised and complex

From the estimation of an augmented model of export entry, we find that agglomeration of exporters - proxied by the number of exporters (following Greenaway and Keller 2008) - has a statistically significant positive contribution to the probability of export entry by Chinese firms. The size of such contribution is larger when exporters are located within the same county, implying that the spillover of knowledge related to exporting is localised to some extent (Note 1). It has been observed that the spillover of technological knowledge is localised; business know-how in foreign markets is likely less tangible and codifiable than patentable technology, relying on proximity to an even greater degree in order facilitate transfer.

A complex pattern emerges when various characteristics of existing exporters and export entrants are considered. Among indigenous Chinese firms we find that agglomeration raises the probability of export entry, while among exporters categorised as foreign-invested firms (FIFs) it reduces that probability. This is at odds with the perception that multinational firms help indigenous firms to penetrate foreign markets through demonstration effects (Note 2). However, previous studies suggest that FIFs often pay higher wages, thereby raising the prices in factor markets, such as that of skilled labour (see for example Aitken et al 1996; Lin et al 2009). Perhaps the higher cost of hiring skilled managers who can handle global business significantly increases the entry cost of exporting. Such negative spillover or congestion effects may offset the benefit of knowledge spillovers. Another possibility is that the nearby agglomeration of exporting FIFs provides an opportunity for indigenous firms to access world demand by supplying their products to those FIFs rather than penetrating foreign markets on their own. An increase in such indirect exports through the global value chains of foreign firms can result in a negative correlation between the agglomeration of exporting FIFs and the export entry of indigenous firms. On the other hand, knowledge spillover from indigenous exporters may be facilitated by common language and may be more relevant to Chinese firms seeking to penetrate foreign markets, given that FIFs are international by definition engaged (Note 3).

The effect of knowledge spillover on the likelihood of export participation varies across firms, likely to depend on 'absorptive capacity.' Figure 1 shows that the impact of knowledge spillovers on indigenous firms is substantially larger when firm characteristics such as export status in the previous year, total factor productivity (TFP), number of employees, and wage level take their maximum values rather than their minimum values. It suggests that larger, more productive, and more skill-intensive firms make better use of knowledge spillovers. Such differences are less clear among FIFs.

In addition, we find that positive spillovers are larger for potential entrants in low-tech industries and China's inland regions. One way to interpret such results is that the firms in low-tech industries face higher entry barriers to exports than those in high-tech industries, possibly due to their lower skill intensities or less frequent interaction with FIFs. Similarly, the firms located in inland regions may face more difficulties in accessing foreign markets than those in coastal regions. As a result, the value of knowledge spillover from agglomerations is more pronounced for those. It is also possible that the knowledge spillover from other exporters plays a larger role in industries and regions that have not enjoyed generous export promotion measures.

Figure 1: The Marginal Effects of Exporter Agglomeration on the Probability of Export Entry 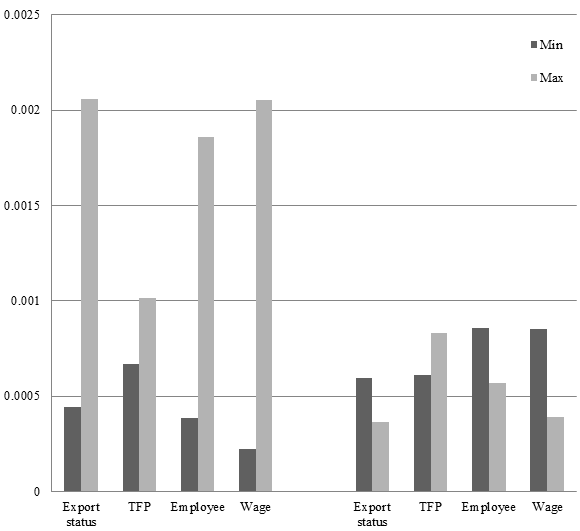 Note: Agglomeration of exporters is captured by the number of exporters in the same country and industry. The marginal effect from agglomeration for each case is computed by setting a specific firm characteristic at its minimum or maximum value while setting all other variables at their mean values. In the case of previous export status, which is a dummy variable, the maximum indicates the value of one (firms which exported in the previous year), while the minimum indicates zero (firms which did not export in the previous year).

As China seeks to accelerate its economic reforms by further opening its economy and stimulating innovation, global engagement by a larger number of Chinese firms - especially private firms and small and medium enterprises - remains an important policy goal. Entry costs of exporting stem not only from administrative burdens but also from acquisition of the knowledge required to penetrate foreign markets. Our analysis provides at least three policy implications. First, export promotion policy should exploit the role of agglomeration in reducing such entry costs. Encouraging the agglomeration of exporters within a special economic zone can be effective in increasing the global engagement of nearby firms. Second, firms' investments in knowledge of foreign markets may be socially sub-optimal due to the existence of such spillover. This suggests a public service that makes information on foreign business environments widely accessible and assists in the process of matching to foreign buyers. Finally, there is a case for concentrating such policy measures among firms that are likely to be facing relatively higher entry costs to exports, namely those in low-tech industries or those operating in inland regions. It is also desirable that policy encourages the smaller, less skill-intensive, and less productive firms to absorb and leverage external information. While the specifics of implementation are unclear, promoting knowledge-sharing of successful global business conduct among small firms is a promising avenue.

Editor's Note: The main research on which this column is based (Ito, Xu and, Yashiro 2013) first appeared as a Discussion Paper of the Research Institute of Economy, Trade and Industry (RIETI) of Japan. The views expressed in the paper are solely those of the authors, and do not represent those of DRC, OECD or RIETI.

This article first appeared on www.VoxEU.org on December 3, 2013. Reproduced with permission.