Historical trends of agglomeration to the capital region

Two important long-run trends in economic geography are steady urbanisation and agglomeration to the big cities. This column presents recent research on population trends focusing on fixed regions over time. In seven of the eight countries studied, the region containing the largest metropolitan area significantly increased in population share at the expense of the rest of the country over the past few centuries. A 'new economic geography' model with multiple, asymmetric regions can replicate this new stylised fact.

The first stylised fact about regional population distribution is the steady progress of urbanisation. As shown in Figure 1, the urban population percentage has been steadily growing for a long time all over the world (United Nations 2011). 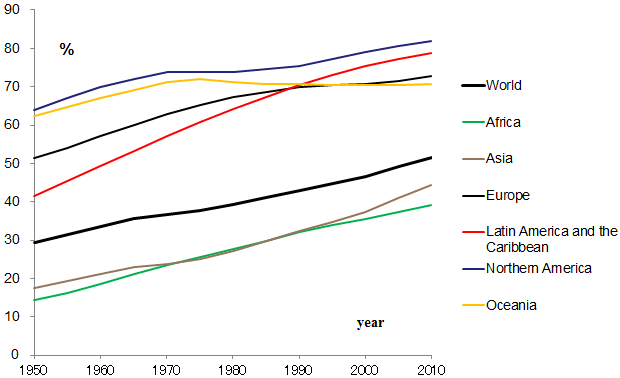 Figures 2a and 2b. Postwar Trends in the Shares of the Largest Metropolitan Areas

The population in each sample country increased during the study period, and on average, the largest metropolitan areas' share of the population also increased owing to interregional migration. In order to confirm this trend, I calculated the correlation coefficients between the population share of each country's largest metropolitan area and its sample years. Of these 30 countries, the correlation coefficients were significantly positive at the five-percent level in 24 countries, significantly negative in four countries, and insignificant in two countries. In other words, the population share in most of the largest cities in the top 30 countries by GDP has grown since the second world war. This is the second stylised fact.

Figure 2a displays the 25 countries in which the population share of each country's respective largest metropolitan area is increasing over time, while Figure 2b shows the five countries in which the respective population share is decreasing over time. The growth in Tokyo, Ar-Riyadh, and Seoul - which have increased by approximately 15 percentage points over the 60-year study period - is particularly notable.

Most of the largest agglomerations have experienced gradual postwar growth, with a few exceptions such as New York. The regional evolution in the US may be explained by immigration from Europe and settlement to the Western region for more than four centuries. Rather than focusing on these few exceptions, this column addresses the gradual increases in the largest agglomerations that started agrarian societies, which later developed into industrialised societies.

There is consensus that, while regional populations were dispersed in early times, they have been increasingly concentrated into one capital region over centuries - especially after the Industrial Revolution. This column plots the long-term regional population distributions for several countries in order to assess how the Industrial Revolution and the recent IT revolution have affected urbanisation and agglomeration to the core regions, through decreases in shipping and communications costs (Bairoch 1988).

For assessing the longer-term changes in the spatial distribution of economic activities, I consider a spatial unit that is fixed over time. A spatial unit should be large enough to include metropolitan areas that contain a central city and commutable suburbs.

I collected historical data on the regional populations and aggregated selected data for an eight-country sample: Brazil, France, Great Britain, Italy, Japan, Spain, Canada, and the US - which are those that I was able to source. For the other countries, either the sample period of the data is too short, or the number of regions is too few to observe the long-run agglomeration tendencies. The data sources are listed in Tabuchi (2012). The historical population shares in each region are plotted in Figures 3a-3h.

Figures 3a and 3b. Regional Population Share in Brazil (left) and France 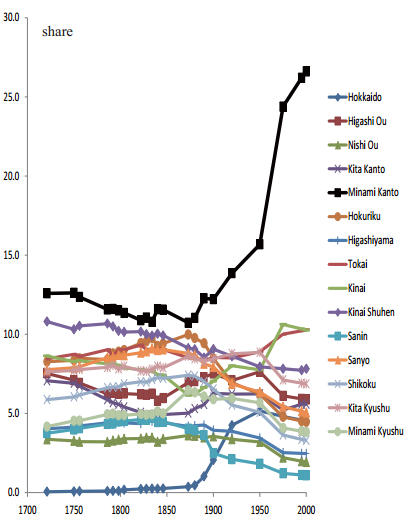 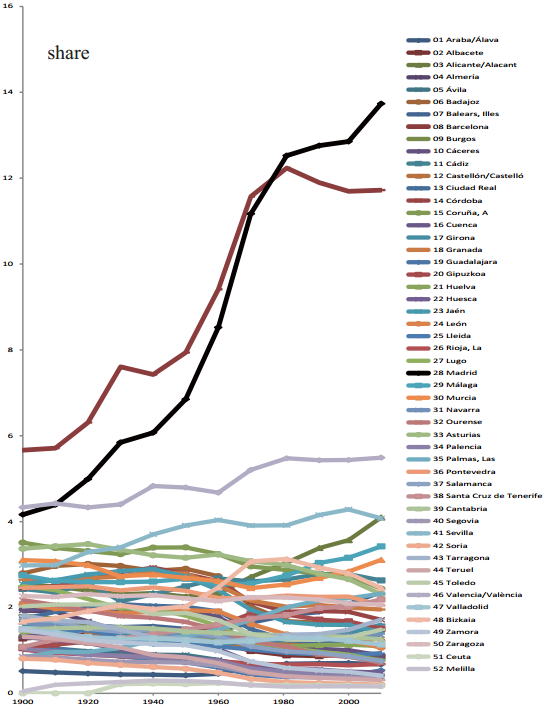 Figures 3g and 3h. Regional Population Share in Canada (left) and the US 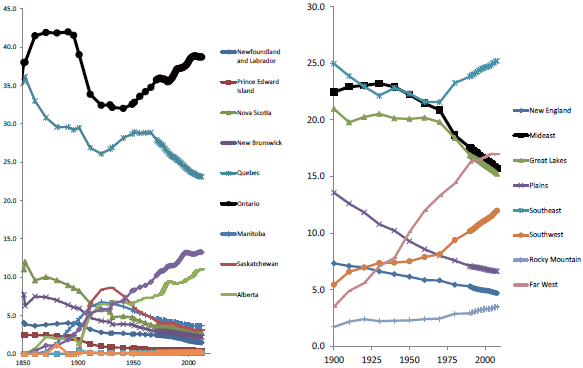 A visual inspection of Figures 3a-3g reveals the striking feature that the region containing the largest metropolitan area has experienced significant population growth in recent years in comparison with that in the rest of the country. In particular, the regions with the largest metropolitan area in Brazil (Figure 3a), France (Figure 3b), and Japan (Figure 3e) showed remarkable growth relative to the rest of their respective countries. Indeed, the share of the studied region tripled in France, and was 2.5 times larger in Brazil and Japan during their respective study periods. The growth pattern was similar in Spain (Figure 3f). However, Spain also presents rapid population growth in its two central regions, Madrid and Barcelona - possibly due to their different cultures (although Barcelona has lost share since the 1980s). Therefore, the same basic forces seem to be at work in these countries. I therefore conclude that the region containing the largest metropolitan area has significantly increased in population share at the expense of the rest of the country over the long run in these seven countries. This is the third and a new stylised fact.

Finally, it is fair to say that not all of the countries have experienced the same regional growth patterns. The notable exception is the US. Its largest metropolitan area (New York) and capital (Washington, DC) belong to the Mideast region of the country. According to Figure 3h, the share of the Mideast region has been declining since the early 19th century. This decrease is in sharp contrast to that in other countries, and is relatively similar to what Ontario province in Canada experienced in the first half of the 20th century. The declining shares of the Mideast region and Ontario province may be attributed to the aforementioned settlement to the Western region, while millennia of settlement history exist in the other countries.

Such historical trends in the agglomeration to the core regions may be explained by the 'new economic geography' literature pioneered by Krugman (1991). In Tabuchi (2012), I extended Krugman's model to multiple regions, with asymmetric interregional transport costs and asymmetric distributions of immobile demand. I showed the home market effect observed in the trade literature (Krugman 1980) for sufficiently high transport costs, and full agglomeration in the geographical centre of the economy for sufficiently low transport costs.

Since these findings approximate the early and late periods of the historical trends experienced in my sample countries (Figures 3a-3g), I conclude that these new economic geography models are capable of replicating the real-world tendency for urban agglomeration to the core region over the past few centuries.

Editor's Note: The main research on which this column is based (Tabuchi 2012) first appeared as a Discussion Paper of the Research Institute of Economy, Trade and Industry (RIETI) of Japan.

This article first appeared on www.VoxEU.org on November 28, 2013. Reproduced with permission.