Is the negative impact of FDI real? Empirical evidence from Japan

The Japanese government is concerned about the so-called "hollowing out of manufacturing," referring to the negative effects of FDI on domestic employment. A typical story is described below

"Japanese firms face severe competition with firms in low-wage Asian countries such as China, Korea, and Taiwan. Many Japanese firms, therefore, establish their overseas subsidiaries in low-wage countries, which results in the manufacturing workers in Japan losing their jobs. To protect them, it is necessary for the government to subsidise Japanese firms."

The government subsidises firms which establish new plants inside Japan. Following the earthquake the government provided additional financial support for firms. The Ministry of Economy, Trade and Industry (METI) provided subsidies reaching approximately 300 billion yen ($3.85 billion) to 510 firms to remain in the country.

Before examining whether these policies are adequate, we investigate whether or not FDI has a negative employment effect.

My recent study examines the employment effects of FDI using comprehensive firm-level data from the Basic Survey of Japanese Business Structure and Activities (METI, 2001-2008). I compare firms that initiated FDI to those that did not using propensity score matching (PSM).

Figure 1: Impact of FDI on the Log of Employment in Manufacturing (Tanaka, 2012) 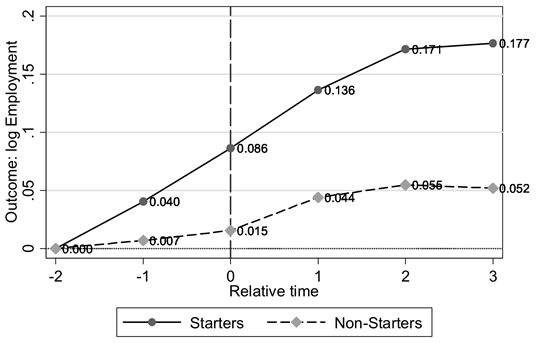 Note: The relative time is zero for the year when FDI is initiated. The vertical axis represents the change from t-2 in the log of employment. The solid and dashed lines represent first-time investors and the matched control group, respectively.

The results indicate that the impact of FDI on employment in the Japanese manufacturing industry in the 2000s was positive rather than negative. The positive employment effects of FDI are accompanied by positive effects on exports and domestic sales by the parent firms in Japan. This suggests that the relationship between domestic and overseas activities by Japanese firms is complementary.

Another study I conducted with Keiko Ito (Ito and Tanaka 2013) sheds light on the impacts of FDI on domestic suppliers. We identified the transaction relationship among Japanese firms using a database provided by Teikoku Databank and constructed a firm-level database which contains basic information on Japanese firms and their foreign subsidiaries and domestic suppliers. Our results show that, on average, Japanese firms' foreign activities are positively - or at least non-negatively - related to their domestic non-multinational suppliers' employment. This new finding implies that firms that supply their products to multinational firms can enjoy positive employment effects.

Empirical evidence does not support the hollowing out of manufacturing or a negative employment impact of FDI on the Japanese manufacturing industry. Rather, FDI shows positive employment effects. The implication is that policy which lowers firms' incentives to invest abroad is not adequate for increasing domestic employment.

Authors' note: Tanaka (2012) and Ito and Tanaka (2013) are outputs of a project on international trade and investment undertaken by the Research Institute of Economy, Trade and Industry (RIETI).

This article first appeared on www.VoxEU.org on November 20, 2013. Reproduced with permission.