As large-scale natural disasters occur year after year, many small and medium-sized enterprises (SMEs) struggle with slow recovery. In response to this situation, in May 2019, the Act on Partial Amendment of the Act on Enhancement of SME Management to Contribute to Continuation of Business Activities by SMEs (SME Resilience Enhancement Act) was enacted. Under this law, regional financial institutions are expected to contribute to support the formulation of business continuity plans (BCPs) by SMEs, as formulating BCPs is useful in enhancing SME resilience.

The motivation for our research was to enhance the resilience of SME business management. As a result of this research, in September 2020, we published the book titled Large-Scale Disaster Risk and Regional Companies' Business Continuity Plans—Enhancement of SMEs' Resilience and Support by Regional Financial Institutions (Chuokeizai-Sha Inc. in Japanese), which analyzes the current status of BCP formulation and support. 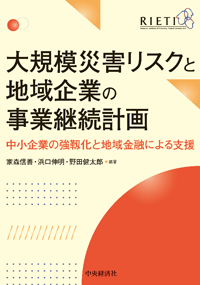 Therefore, in order to improve the business continuity capability of SMEs and micro-enterprises, the SME Resilience Enhancement Act introduced a mechanism that encourages those enterprises to formulate plans for strengthening that capability. Our research focused on how to create a situation in which more companies have substantial BCPs—in other words, what is necessary for increasing the effectiveness of the SME Resilience Enhancement Act.

For the purpose of this analysis, we conducted two questionnaire surveys. One is the "Survey on Companies' Sentiment about Business Continuity Plans (BCP)," which was distributed to 10,000 companies (of which 2,181 replied) in October 2018. The other is the "Survey on SME's Preparations for Natural Disasters and Support by Regional Financial Institutions," which was sent to 7,000 branch managers of regional financial institutions (of whom 2,623 replied) in May 2019. This survey was conducted in light of the attention paid by the SME Resilience Enhancement Act to regional financial institutions' support for BCP formulation.

Our new book is based on these two questionnaire surveys. Here, we provide a look at some of the survey results that are likely to contribute to policy-planning.

When we asked companies that had not formulated a BCP why they had not done so, the most frequently cited reason was "a lack of skills and know-how necessary for BCP formulation" (52.5%). On the other hand, only 10.5% cited "a lack of an incentive program such as a discount on guarantee fee or interest rate."

Naturally, even if companies can receive subsidies, they cannot formulate BCPs without the necessary know-how. As the process of BCP formulation itself leads to the enhancement of resilience, emphasis should be placed on providing knowhow-related support.

However, there are some points of caution. One is that among companies with badly performing businesses, a high percentage chose "a lack of an incentive program such as a discount on guarantee fee or interest rate." Another is that our survey was targeted at relatively large companies. Therefore, the possibility cannot be ruled out that providing subsidies or other financial incentives may be effective as a measure to support micro-enterprises with harsh business conditions.

We asked financial institutions' branch managers about the percentage of companies that had formulated a BCP among the client companies doing business with their branches as their main creditor banks. More than half replied that they did not have a grasp of the status of client companies' BCP formulation. Of the branch managers who cited a specific percentage, more than half replied that less than 5% of their client companies had formulated a BCP. Compared with the BCP formulation rates arrived at through the surveys conducted by the Small and Medium Enterprise Agency (15.5%) and by us (22.6%), this figure is very low.

It is likely that most financial institutions' frontline staff do not have an accurate grasp of the status of client companies' BCP formulation.

What I would like to point out is not negligence on the part of frontline staff. My point is that head offices are not making sufficient efforts to make it understood by frontline staff that supporting client companies' BCP formulation is necessary for the sustainable growth of both the companies and the financial institutions.

The enactment of the SME Resilience Enhancement Act was meant to provide an impetus for change in the attitudes at head offices. It is essential to make the purpose of this law fully known to the head offices of financial institutions.

BCP Should Be Incorporated into Feasibility Assessments

To sum up, while regional financial institutions' feasibility assessment activity has made considerable headway, there are still few financial institutions that are supporting the enhancement of SMEs' resilience against natural disasters based on the full understanding of companies' feasibility. That is exactly the reason for the legislation of the SME Resilience Enhancement Act.

In 2020 as well, large-scale natural disasters have occurred, including the flooding disaster in July, and infection disaster risk has also materialized in the form of the coronavirus crisis. We hope that regional financial institutions will further enhance support for BCP formulation based on feasibility assessments in order to increase the sustainability of SMEs.