The Potential for New Innovation Research Through "Econoinformatics"

In the 19th century, mathematician William Shanks devoted his life to calculating pi, and is said to have calculated it up to 707 decimal points in 15 years. Now, in the 21st century, the University of Tokyo Professor Yasumasa Kaneda calculated pi to 1.24 trillion decimal points in 600 hours using just half of the ability of the university's supercomputer. This is the equivalent of the manual calculations done by 1.7 billion mathematicians during their entire lifetimes. If one person was to attempt this, it would require some 25 billion years - roughly four times the history of the earth. In other words, the utilization of the latest information science and computers makes it possible to find answers to questions that so far have not been possible to answer by human hands alone. For this reason, computers are now a necessary and indispensable tool in the research of natural sciences such as mathematics, physics and biochemistry. What kind of possibilities can be opened up if the overwhelming power of computers is applied to questions of economics?

The relationship between science, technology and innovation

One of the big questions in economics is what the factors behind long-term economic growth are. Research so far shows that a great deal of long-term economic growth is not brought about through the input of labor or capital, but through technological innovation. One factor behind such innovation is said to be science. The infusion of public funds into scientific research has been justified for such reasons. However, the question of how and to what degree science affects technological innovation has yet to be fully solved. One method that is considered effective in answering this question is bibliometrics, which originated from research into the references cited in academic papers. Bibliometrics is used in such scientific evaluation indexes as the science citation index and the impact factor. While certain points need to be kept in mind, "science linkage," which applies bibliometrics to patents and calculates the number of scientific papers cited in patents, is considered an effective index that links "technology," which is a factor that boosts industrial productivity, and "science," which is the systematic accumulation of intellectual activity.
Our research team is using bibliometrics along with the latest computers and advances in information science to study the question of how and to what extent science contributes to technological innovation, which is a source of long-term economic growth. Specifically, we have created a computer that has memorized and can freely process all publicized patent data (photo 1) and are conducting research by creating a database of Japanese patents, inside its more than 1.1 terabytes of storage capacity (the equivalent of 4 million paperbacks), that serves as a the foundation for our analysis. 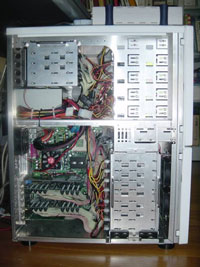 From our research results so far, we have found that when the science linkage of the four priority areas (biotechnology, nanotechnology, IT hardware, and environmental technology) under the government's Science and Technology Basic Plan are compared, each biotechnology patent makes reference to an average 11.5 theses, a science linkage nearly 20 times that of the 0.6 thesis per patent result from random sampling. This is followed by two theses per nanotechnology patent, which is 3.3 times the random sampling figure, while the science linkage for IT hardware and environmental technology is lower than in the random sampling. We also found that public funds and studies by public research institutions contributed to patents, as a great number of the theses cited were published by universities and public research institutions; and many studies reflected public reports.

We now plan to study the possibility of creating a program under which the computer, employing the information on theses and other references used in 1,500 patents extracted by humans as "teacher" data with the computer as a "student," automatically calculates science linkage. Should this become possible, we would be able to exhaustively study other patents and papers cited in patents at a more detailed and exclusive patent technology classification level. For example, it would become possible to specify which areas of technology have a high degree of science linkage by extracting the reference papers cited in all the text data of the 4.5 million publicized patents in the database and looking into their linkage with a maximum of 37,000 technological fields.
Furthermore, through a timeline-based analysis of science linkage, we would also be able to make a quantitative evaluation of the impact the Science and Technology Basic Plan had on Japan's innovation system.
In studying science linkage by university, we would also become able to attempt a quantitative evaluation of the tie-ups between industry and universities by individual university and faculty.
Through analysis of patent applications and technology areas by region, and the authors of scientific papers cited in those patents, we would also be able to contribute to the study of regional clusters.
It will also become possible to study the technological tracks left by companies that have promoted innovation by focusing on the changes in the technological areas in which they made patent applications.
As this shows, quantitative innovation research through "econoinformatics" holds great future potential.