Chinese Economy Bottoming Out: Improvement in macroeconomic indicators in March worth noting

China's real gross domestic product (GDP) growth rate was 6.7% year on year in the first quarter of 2016, slightly lower than 6.8% in the previous quarter, and the lowest since the first quarter of 2009 (6.2%), when the Chinese economy was hit by the Lehman Brothers collapse. However, most major economic indicators improved significantly in March from January-February, suggesting that the economy might have bottomed out.

First, the Purchasing Managers' Index (PMI) for manufacturing was 50.2 in March, exceeding the 50 point level that separates expansion and contraction for the first time since July 2015. Improvement was seen in a wide range of sub-indices including production, new orders, purchase of inputs, imports, and input prices. The non-manufacturing PMI also rose from 52.7 in February to 53.8 in March (Figure 1). 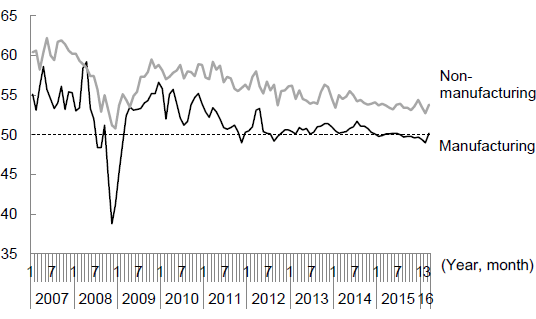 Source: Compiled by the author based on the CEIC Database (Original data from the National Bureau of Statistics of China).

In terms of production, the year-on-year growth rate of industrial production (valued-added basis, covering enterprises above designated size) rose from 5.4% in January-February to 6.8% in March.

In regard to external demand, exports (in U.S. dollar terms) increased 11.5% year on year in March, entering positive territory for the first time since June 2015 (Figure 2). Reflecting the devaluation of the yuan from summer last year and the higher exchange rates of the yen and the euro against the dollar, the effective rate of the yuan has fallen, which seems to have led to an increase in the price competitiveness of Chinese products in the international market. On the other hand, the year-on-year decline in imports (in dollar terms) narrowed to 7.6% in March from 16.7% in January-February.

Figure 2: Changes in Exports and Imports

Source: Compiled by the author based on the CEIC Database (Original data from the General Administration of Customs People's Republic of China).

Figure 3: Changes in CPI and PPI 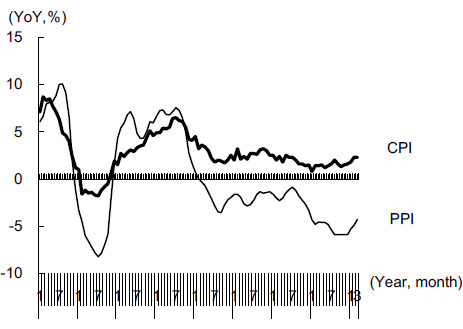 Source: Compiled by the author based on the CEIC Database (Original data from the National Bureau of Statistics of China).

Backed by improvement in the fundamentals of the Chinese economy, the Shanghai Stock Exchange (SSE) Composite Index rose from the bottom of 2,656 on January 28 and stayed in the 2,900 range in late April. Foreign exchange reserves also increased in March, the first rise since October 2015, and the exchange rate of the yuan against the U.S. dollar, which fell sharply at one point, also regained stability (Figure 4). Thus, the turmoil in the financial market triggered by the sharp fall in stock prices after summer last year is returning to normal.

Figure 4: Changes in the Exchange Rate of the Yuan and Foreign Exchange Reserves of China 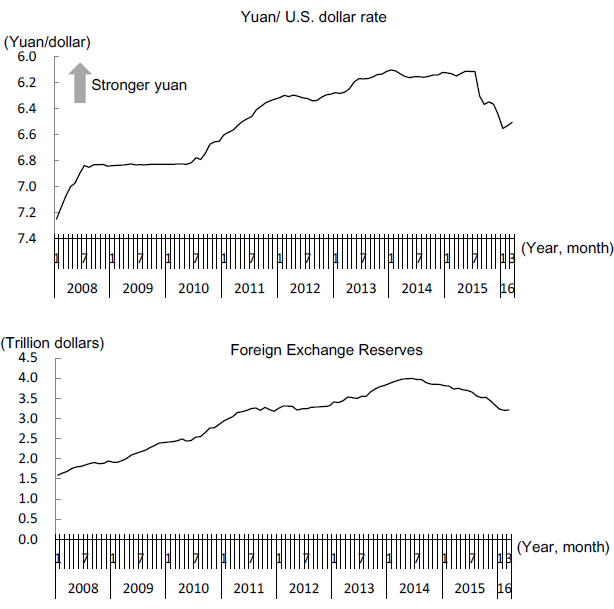 Source: Compiled by the author based on the CEIC Database (Original data from the State Administration of Foreign Exchange and the People's Bank of China).

When looking at future economic trends, it is important to pay attention to the course of the housing market. Floor space of commercial residential buildings sold and housing prices are useful as leading indicators for housing investment. Both of these indicators exhibit high growth, suggesting that housing investment will accelerate going forward (Figure 5). The recovery of the housing market will support and help drive the economy. However, Chinese housing prices have already reached the bubble stage, and prospects over the long term point to a growing risk that the economy may suffer serious consequences as the bubble finally bursts. In addition, many industries, including steel and coal, are still plagued by the "three excesses" of excess production capacity, excessive debt, and excess employment, which will continue to put a drag on economic growth for some time to come. Therefore, there is little reason to expect the kind of V-shaped recovery seen after the Lehman Brothers collapse.

Note: The Housing prices series is the simple average of the change in the individual indices in 70 large and medium-sized cities, using the Sales Price Indices of Newly Constructed Residential Buildings up to December 2010 and Sales Price Indices of Newly Constructed Commercial Residential Buildings from January 2011. Floor space sold is that of newly constructed commercial residential buildings (excluding affordable housing). As these data are published in aggregate for January and February, the chart shows the same figure for both months.
Source: Compiled by the author based on the CEIC Database (Original data from the National Bureau of Statistics of China).

Although this environment has prompted mounting calls for measures to stimulate the economy, such as fiscal expansion, these measures most likely will not be implemented for the following reasons. First, the cause of the three excesses mentioned earlier was none other than the expansion of investments by enterprises in association with measures implemented after the Lehman Brothers collapse to invest four trillion yuan to boost domestic demand. In addition, the potential growth rate of China appears to have fallen from around 10% in the past to about 7% now due to constraints on the supply side such as labor shortages. Based on this view, the current growth rate of 6.7% in no way suggests a serious recession. In fact, despite the low growth, the job offers-to-seekers ratio in urban areas in the first quarter of 2016 stood at 1.07, a level commensurate with full employment, suggesting that the potential growth rate might have fallen significantly (Figure 6). 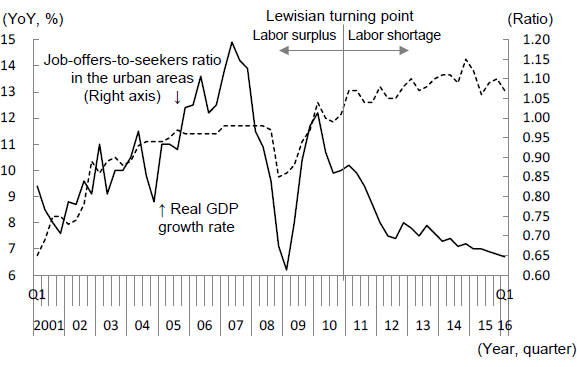 Note: The job offers-to-seekers ratio shown above is calculated by dividing the number of job offers by that of job seekers registered in public employment services organizations in approximately 100 cities in China.
Source: Compiled by the author based on statistics of the National Bureau of Statistics of China and the Ministry of Human Resources and Social Security.

Based on this recognition, the government is unwilling to implement large-scale measures to boost domestic demand. If it is confirmed further on down the road that the economy has bottomed out, this stance will become even more evident.