Soaring Housing Prices: Is this good or bad for China?

Housing prices are once again soaring in China, particularly in the first-tier cities, driven by the flow of money from the stock market to the housing market following a sharp downturn in share prices. In response, housing investment has also begun to rise. In the short term, the recovery of the housing market will help underpin economic growth in China and prop up international commodity prices. However, Chinese housing prices are already reaching the bubble stage, and prospects over the longer term point to a growing risk of a burst of the bubble taking a toll on the economy.

Propping up the economy and primary commodity prices

Since mid-2015, Chinese housing prices have been trending upward in stark contrast to plunging stock prices. The pace of increase in housing prices is particularly fast in the first-tier cities. For instance, in March 2016, housing prices year on year rose by 62.5% in Shenzhen, 30.5% in Shanghai, and 17.6% in Beijing (Figure 1). The trend is now spreading to other cities, with housing prices rising on a month-on-month basis in 62 out of the total of 70 surveyed cities in March 2016 (Figure 2). 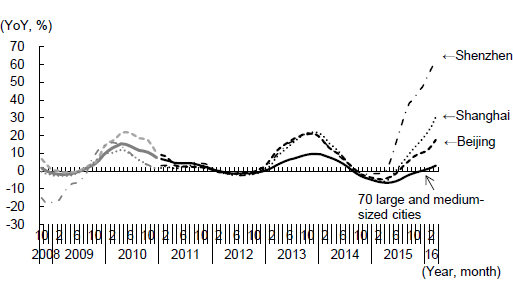 Figure 2: Changes in the Number of Cities by Type of Housing Price Trends (Monthly Changes)

Note: Price Indices of Newly Constructed Commercial Residential Buildings in 70 large and medium-sized cities.
Source: Compiled by the author based on the CEIC Database (Original data from the National Bureau of Statistics of China).

Unlike in other countries, we can see a negative—rather than positive—correlation between stock and housing prices in China. This may reflect major shifts in the direction of money flowing between these two types of assets, as Chinese investors have no options other than choosing one of them. Indeed, when housing prices soared last time from 2013 through mid-2014, stock prices were depressed, whereas when the housing market entered into a correction phase in the latter half of 2014, stock prices began to surge. When the stock market then crashed in June 2015, money began to flow back into the housing market, leading to the ongoing upswing in housing prices (Figure 3). Apart from the influx of money from the stock market, steps taken to relax mortgage requirements, such as lowering the minimum down payment ratio for home buyers, is also giving a further boost to housing prices. 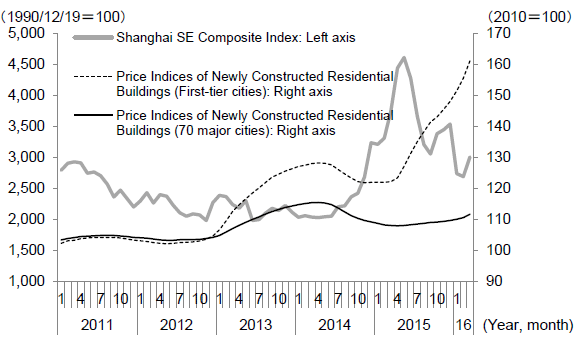 Note: Index values for nationwide represent the average of the 70 large and medium-sized cities, and those for the first-tier cities are the average of Beijing, Shanghai, Guangzhou, and Shenzhen.
Source: Compiled by the author based on the CEIC Database.

Against this backdrop, housing investment has turned upward in 2016 (posting a 4.6% increase year over year in the cumulative total for the first three months of the year) after falling below the previous year's level from August through December 2015. The recovery in housing investment, which accounts for roughly 10% of China's gross domestic product (GDP), will help buoy the economy.

With demand for steel growing on the back of this recovery, the prices of steel products have turned into an upward trend (Figure 4). Primary commodities such as iron ore and coal, which have strong supply-chain linkages with the steel industry, will also see stronger demand and rising prices sooner or later. That would be good news for natural resource exporting countries. Indeed, the Reserve Bank of Australia (RBA) Index of Commodity Prices, which has a strong tendency to move in tandem with housing investment in China, has begun to show signs of recovery (Figure 5).

Figure 4: Changes in the Prices of Steel Products 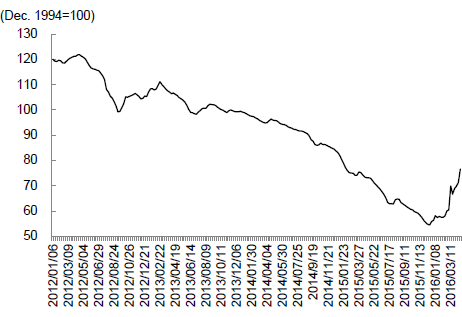 Source: Compiled by the author based on the CEIC Database (Original data from the China Iron and Steel Association).
Figure 5: RBA Index of Commodity Prices Moving in Tandem with Housing Investment in China (Year-on-year % change) 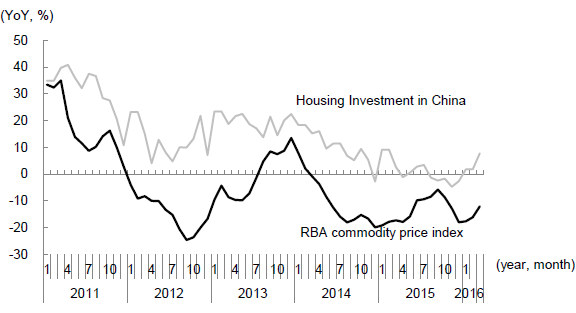 Source: Compiled by the author based on data from National Bureau of Statistics of China and the Reserve Bank of Australia.

Inflation of the bubble reaching an alarming stage

However, housing prices in the first-tier and some other cities may have already reached levels that far exceed their equilibrium prices.

In 2014, the latest year for which data are available, the ratio of housing price to household income (annual income) was high in major cities, led by Shenzhen at 21.7, Beijing at 20.1, and Shanghai at 19.7 (Figure 6) and exceeding the level observed in Tokyo in the bubble period of the late 1980s. 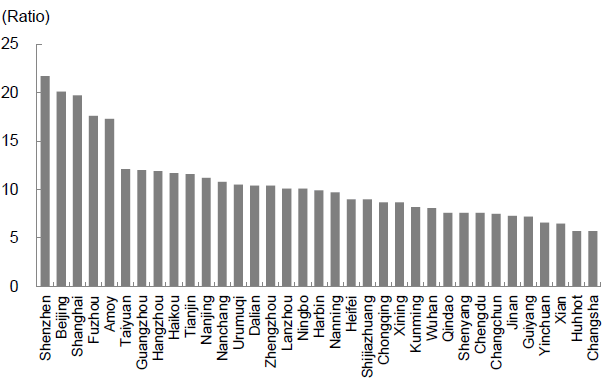 Note: Excluding government-subsidized housing for low income households. Average household income is based on annual household income amount.
Source: Compiled by the author based on the "Ranking of the House Price-to-Income Ratio in 35 Large and Medium-sized Chinese Cities 2015" from Shanghai E-House China R&D Institute (May 2015).

Meanwhile, in February 2016, the rent to housing price (rent as an annualized amount) was far below interest rates on bank loans in major cities, for instance, standing at 1.6% in Shenzhen, 2.0% in Beijing, and 2.1% in Shanghai compared to the standard interest rate on a one-year bank loan of 4.35% (Table 1). In other words, for those purchasing houses for investment purposes, their investment will not be profitable if they cannot hope for any capital gain from rising prices and have to rely solely on rental income.

Source: Compiled by the author based on data of the China Real Estate Industry Association (http://www.creprice.cn/).

Thus, housing prices in major Chinese cities seem to have already reached the bubble stage. With the burst of its bubble in the early 1990s, Japan entered into a prolonged recession. In order to avoid falling into the same fate as Japan, China must act quickly to put housing prices under control.

The original text in Japanese was posted on April 15, 2016.
Some statistics have been updated in this translated version.