Why Are China's Foreign Exchange Reserves Declining Sharply? A reflection of valuation losses and capital outflow

Factors behind the decline in foreign exchange reserves

China's foreign exchange reserves fell from its peak level of $3.9932 trillion in June 2014 to $3.4383 trillion in November 2015. This decline is largely a reflection of the valuation losses on the euro and major currencies other than the U.S. dollar in which foreign exchange reserves are invested due to the depreciation of these currencies against the U.S. dollar as well as the acceleration of capital outflow from China. In this paper, I will examine the causes for the sharp decline in foreign exchange reserves by comparing the "Size of China's Foreign Exchange Reserves" released by the People's Bank of China with the "Balance of Payments" released by the State Administration of Foreign Exchange. However, taking into consideration of the fact that while the data before November 2015 have already been published for the Size of China's Foreign Exchange Reserves (monthly), only data up to the third quarter of 2015 have been published for the Balance of Payments (quarterly), and the scope of analysis is limited to the period between June 2014 and September 2015.

To come right to the point, China's foreign exchange reserves declined to $3.5141 trillion in September 2015, falling by $479.1 billion from June 2014, of which $221.3 billion were caused by valuation losses due to changes in the exchange rates and interest rates, while $257.8 billion reflected the balance of payments deficit. The reason why the balance of payments fell into the red despite the fact that the current account of China recorded a significant surplus during this period is that the capital account deficit (including errors and omissions) was larger than the current account surplus (Table ). 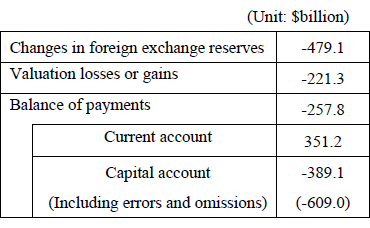 In addition to the U.S. dollar, the foreign exchange reserves of China include other major currencies such as the euro and the yen. If the exchange rates of these currencies against the dollar change, losses or gains will occur when they are valued in the U.S. dollar. In addition to changes in exchange rates, losses or gains will also occur due to changes in interest rates if foreign exchange reserves are invested in bonds.

While the foreign exchange reserves of China based on the "Size of China's Foreign Exchange Reserves," which take into account the valuation losses and gains, declined by $479.1 billion between June 2014 and September 2015, foreign exchange reserves based on the "Balance of Payments," which ignore such losses and gains, decreased by only $257.8 billion over the same period. The difference of $221.3 billion between the two measures can be interpreted as the size of valuation losses. The interest rates of major currencies during this period were relatively stable, but given that the euro and the yen depreciated by around 20% against the dollar, most of the valuation losses are presumed to be caused by changes in exchange rates (Note 1).

In addition to valuation losses in investment due to changes in exchange rates, the deterioration of the capital account in the balance of payments also contributes to the decline in foreign exchange reserves.

The following identity holds for the balance of payments (Note 2).

In the case of China, "changes in foreign exchange reserves" based on the balance of payments that correspond to this equation declined by a total of $257.8 billion from June 2014 to September 2015. During this period, although the amount of exports declined, the current account surplus increased because the decline in the amount of imports was even larger. Nevertheless, foreign exchange reserves declined because the capital account deficit was much larger than the current account surplus, reaching $389.1 billion and $609.0 billion if errors and omissions are included.

The accelerated capital outflow is largely the result of three changes in China's domestic environment and the international environment.

First, although interest rates in the United States and other major overseas markets are generally stable, they are falling rapidly in China as a result of monetary easing. The contraction of the differential between domestic and foreign interest rates brought about by this easing is inducing the outflow of capital from China.

The second factor is the change in expectations toward the yuan. Instead of expecting it to be revalued as it was in the past, more people are expecting it to be devalued. This shift has not only triggered the reflux of funds overseas that once flowed into China in anticipation of the revaluation of the yuan to other countries, but also spurred the outflow of funds from the domestic economy.

In addition, the government's ongoing anti-corruption campaign seems to have prompted bureaucrats tainted by corruption to accelerate the transfer of their assets out of the country through informal channels, as suggested by the sharp rise in errors and omissions in the balance of payments since 2014.

Source: Compiled by the author.

The authorities in China are facing the trade-off relation between the balance of payments deficit (= a decline in foreign exchange reserves) and the devaluation of the yuan. They must formulate a policy based on one of the following three choices.

In mid-August 2015, China pursued the policy described in (3) and devalued the yuan. While this action prompted a sharp fall of stock prices worldwide, the magnitude of devaluation was not large enough to eliminate the balance of payments deficit, and foreign exchange reserves have continued to decline. However, China must exercise caution when deciding to implement the policy in (1), which calls for a significant devaluation of the yuan, because it would not only intensify trade friction with developed countries such as the United States, but also provoke capital outflow from China and competitive devaluations in Southeast Asian countries and other developing nations. In the end, the only remaining choice is the policy in (2), suggesting that the downward trend of foreign exchange reserves of China is very likely to continue.

The original text in Japanese was posted on December 28, 2015.