Perspectives from Around the World 070

A Look at the Recent State of Corporate Governance in Japan

Miyajima: The major problems that a country faces in corporate governance vary appreciably. For example, the problem in the United States is excessively high-powered incentives given to top managers, which could induce them to take excessive risks, while the European continent is facing strong family control, which often exploits minority shareholder interests. What do you think about the unique features of corporate governance issues in Japan?

Mayer: The traditional problem of Japanese corporate governance has been too much insider control by banks and corporations. With the emergence of foreign institutional shareholding, the concern of the Japanese corporate sector has moved in the direction of how to retain stable shareholdings. However, there is still a concern that, notwithstanding the emergence of foreign investors, Japanese companies remain excessively insider dominated as demonstrated by the cases of Olympus Corporation and Toshiba Corporation with inadequate sanctions being imposed on poor Japanese management.

Miyajima: Corporate governance reforms in Japan were boosted after the Shinzo Abe Cabinet set an important part of its growth strategy (the so-called third arrow). What is a realistic way to encourage firms to take risks, i.e., raising investment, leverage, and innovation? With reference to Figure 1, deleveraging has continued since the oil crisis, and, after the banking crisis of 1997, it has accelerated. This trend in Japan is quite different from that in the United States, where leverage increased in the 1990s and 2000s. It contrasts with the traditional view of the United States as an equity-based system and Japan as dependent on bank borrowing and therefore highly leveraged. Why has this happened? Is it really a problem of conservative behavior? If so, how should this conservative behavior be solved? Will high-powered incentives work? 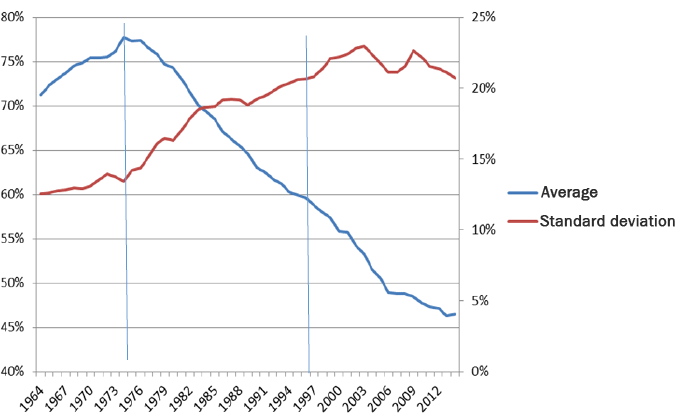 Mayer: The growth of Japanese firms in the high growth era depended on bank borrowing. It was therefore heavily debt financed, giving rise to the high level of leverage. However, with the collapse of the Japanese banking system, leverage declined appreciably and equity financing increased. This change is associated with a decline in the traditional close relations between banks and companies in Japan.

In contrast, in the United States, the growth of investment banking and bond markets has been associated with growing levels of debt finance. The high levels were associated with the failures of banks during the financial crisis. While debt finance can be used as a way of incentivizing companies, it suffers from default risk. The declining levels of leverage in Japan should not be considered detrimental provided that they are combined with appropriate forms of governance by shareholders. In essence, Japanese policy can be characterized as having moved from debt to equity governance at the same that the United States moved from traditional equity to debt governance.

The effect of these changes is to replace what were previously relatively conservative bank shareholders with more risk-tolerant outside institutional investors. This will encourage Japanese corporations to undertake more investment and adopt more innovative policies that pose greater risks but also offer the prospects of higher growth and earnings in the future.

Miyajima: Another recent change of corporate governance arrangements in Japan is the dramatic change of ownership structures. Insider ownership characterized by cross shareholdings between banks and firms is no longer the main trajectory at least among leading Japanese firms. Outsider—in particular, foreign—institutional ownership has been increasing. However, the role of foreign institutional investors is thought to be a double-edged sword. Foreign investors are independent and therefore could be appropriate monitors of Japanese firms whereas domestic investors are passive investors in long-term relations (keiretsu). A counter argument is that foreign institutions are portfolio investors and less informed, so that they are not committed to firms in which they invest and do not monitor adequately. Given these contradictory impressions, what do you think about the current situation in Japan and future appropriate ownership structures? 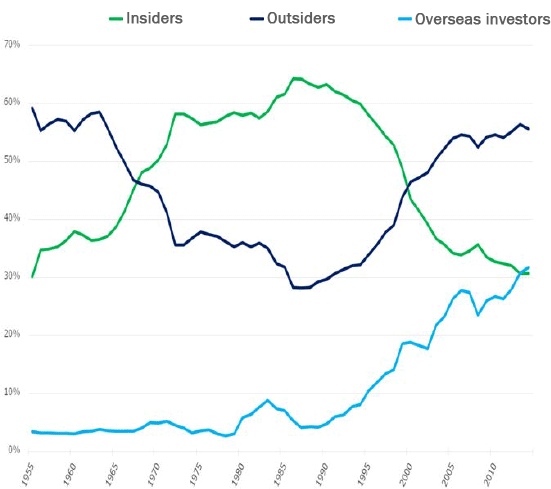 Miyajima: Japan entered into a new era in corporate governance by introducing the Stewardship Code in 2014 and Corporate Governance Code in 2015, both of which were modelled after the UK codes. In implementing this code, there are several points that firms and policy makers were concerned about. The first one was the role of outside directors. There were several cases of outsider directors influencing presidential succession (the sudden resignation of CEOs at leading firms such as Seven & I Holdings, Suzuki Motor Corporation, and SECOM CO., LTD.). One opinion on those incidents is positive, arguing that the independent outside directors played significant roles in their crucial missions. The other opinion is rather skeptical, suggesting that their involvement was damaging because those firms had not been demonstrating bad performance, and the interventions intentionally or unintentionally supported a faction of competing management groups. Do you have any opinion on this?

Mayer: The role of independent outside directors is critical in a UK and U.S. context in terms of providing an outside perspective and independent advice on the running of the firm. Outside directors are regarded as critical in avoiding the conflicts that exist between shareholders and management—the agency problem. In concentrated ownership systems such as that in continental Europe or Korea, outside directors play a different role of protecting minority shareholders against the controlling, often family, owners. In Japan, the role of outside directors is predominantly to reflect the interest of the outside (foreign) institutional investors. One way in which they exercise this power is through the nomination process of new directors and presidents. The conflict that has emerged in Japan is between the succession interests of the traditional insider parties and the outside directors as representative of outside shareholders. Striking the right balance will be difficult in a hybrid system that combines inside interests with outside institutional investors, however, that tension has some potential benefits associated with it.

Miyajima: The second question is that one of the most important principles in Japan's Corporate Governance Code is to require firms to explain their policy on holding stocks. I think that the principle would be a big stride in changing ownership structures in Japanese firms. Cross shareholding is still a unique feature of Japan, although its level has declined substantially (see Figure 2). What do you think is an appropriate ownership structure in the future for Japan?

The emphasis on long-term performance in Japan's Corporate Governance Code is an appropriate focus of the code. It is very much in line with Japanese (and other Asian countries') focus on long-term corporate prosperity. The existence of cross shareholdings, in particular, among corporations, is likely to remain an important component of achieving that.

Miyajima: The next question is the effectiveness of the "comply or explain" principle. On the one hand, this principle may not be effective if all firms follow (comply with) the principle neglecting their own firm characteristics. On the other hand, however, the enforcement of the Code fully depends on the market response to firms' implementation of it since this is not mandatory, and therefore there is no guarantee that the expected reforms will be realized. It is the essential dilemma of the Code that firms that should be reformed will not follow it unless they are under pressure to do so from their institutional investors. What can the UK experience teach Japan about comply or explain?

Mayer: Comply or explain is regarded as a central component of the UK Corporate Governance Code. It avoids the prescriptive nature of regulatory rules, allowing companies to deviate from what is thought to be best practice, provided that they can justify such deviations. There are several concerns with the principle. The first is that while deviations from complying are possible, in practice, companies are reluctant to do so with the result that it establishes norms from which companies are reluctant to deviate.

Second, comply or explain has not stopped egregious behavior by companies in relation to executive remuneration and by banks during the financial crisis in taking levels of risks that threatened the financial system. Third, the comply or explain principle does not assist with ensuring that companies have governance arrangements that are capable of delivering on their corporate purpose. So, for example, there is little evidence from comply or explain statements as to how compliance or deviations assist with the delivery of companies' underlying corporate purposes.

In the Japanese context, this is particularly important because the pursuit of long-term corporate development may involve the adoption of corporate governance practices that seem at variance with the delivery of shareholder value. From the perspective of outside shareholders who are solely concerned with shareholder returns, corporate governance practices may therefore appear seriously at variance with shareholder interests. While the comply or explain principle might therefore be adequate in the context of an outsider system such as the United Kingdom where there is less variation in the composition of shareholders than in Japan, it may be less suited to the very heterogeneous nature of corporate ownership in Japan.

Instead, Japan may be better off designing a corporate governance code that is focused on companies' purposes and explaining how governance arrangements really help to ensure that firms successfully deliver on their purpose. As explained above, this will involve combinations of outside ownership to provide monitoring and independent evaluations with inside ownership to provide longer-term stability and oversight of firms.

Miyajima: Since Abenomics was implemented, the focus of Japanese economic policy over the last few years has been on the promotion of growth, the avoidance of stagnation, and increasing productivity. Corporate governance reforms are also regarded as one of its keys. What role should corporate governance play in promoting strong economic performance?

Instead, corporate governance is concerned with the delivery of growth, development, investment, innovation, productivity and the avoidance of inequality, poverty, and environmental degradation. The way in which it achieves this is through ensuring that companies deliver on their corporate purpose. By corporate purpose, I mean what the company is seeking to do in promoting the interests of the customers it serves and the communities within which it operates. To serve its customers and communities, the firm has to combine the contributions of a variety of different parties: employees, investors, suppliers, and local and national public institutions. The role of corporate governance is to ensure that it does that, and, in the process, corporate governance plays an absolutely critical role in the delivery of the macroeconomic performance of nations as well as the microeconomics of individual firms.

The failure of policymakers to recognize this relation of corporate governance to both firm and macroeconomic performance has been a primary cause of underperformance of corporate and financial sectors around the world and the failures of companies to take adequate account of environmental problems and social issues such as inequality and poverty. Companies are the most important institutions in our lives, and their centrality means that they are the institutions to which we should be turning to address the problems and exploit the opportunities created by technological advances in the 21st century.

Corporate governance is the interface between companies and economies and societies, not just between firms and investors. By focusing excessively on the latter, we have ignored the former and undermined the contribution that the corporate sector should be making to our economic and social well-being. We need to recognize this failure and ensure that corporate governance assists with addressing the fundamental issues that nation states, including Japan, will face over the coming decade.