Perspectives from Around the World 063

Cables, sharks, and the geography of the foreign exchange market

There is ongoing debate about the impact of technological progress on the geography of trade and production. One view is that cheap technology has attenuated the effect of distance, while others argue that location still matters. This column explores the issue in the context of foreign exchange markets. It examines how submarine fibre optic cables that link locations to financial hubs have affected the location of transactions. The findings suggest, on balance, that technological progress has made proximity to a trading centre more important.

The impact of technology on services, and specifically on where services are produced and traded, is one of the great unanswered questions of the post-industrial age. One view is that cheap information and communication technology (ICT) significantly attenuates the effect of distance and other trading barriers on the geography of production. Another view is that distance and other trading barriers still matter significantly (Jacks 2009). In a recent paper, we shed light on this debate using the global foreign exchange market as a case study (Eichengreen et al. 2016).

What might be called the ‘Flat World’ hypothesis (after Friedman 2005) is that location, distance, and other aspects of geography no longer matter in a ubiquitous 24/7 foreign exchange (FX) marketplace. In a world of high-speed communication, currency transactions can take place anywhere and should be observed in a growing number of places, reflecting the availability of relevant inputs. Alternatively, what might be called the ‘Flash Boys’ hypothesis (after Lewis 2014) suggests that location matters more importantly than ever in a 21st century foreign exchange market characterised by competition between high-frequency traders for proximity to data-matching servers and in which speed of execution is critical.

We investigate how the geography of the foreign exchange market has been affected by changes in ICT. Has ICT led to greater concentration of transactions in a handful of major financial centres—such as London, New York, and Tokyo—by allowing more market participants to reap the advantages of being close to the matching servers on which trades are executed electronically? Or has it enhanced the competitive position of suppliers of these services in other places, who can impart local knowledge to their customers but also now more easily link to matching servers located in the major financial centres from afar? In other words, has the landscape of the foreign exchange market become ‘flashier’ or ‘flatter’?

But in the case of the foreign exchange market, we have just such a source of exogenous change and spatial variability. This is the laying of submarine fibre optic cables (see Figure 1). The cable network was built out gradually over time, once fibre optic technology was perfected and the utility of Kevlar-like materials to protect cables against destructive shark attacks was established (sharks being electro-sensitive and therefore going into feeding frenzies when they detect electric current). See Figure 2.

[Click to enlarge]
Notes: This figure reproduces the global network of submarine fibre optic cables using the same data and codes made available by TeleGeography at: https://github.com/telegeography/www.submarinecablemap.com.
Figure 2. Year of First Connection to the UK, US, or Japan Via a Submarine Fibre Optic Cable 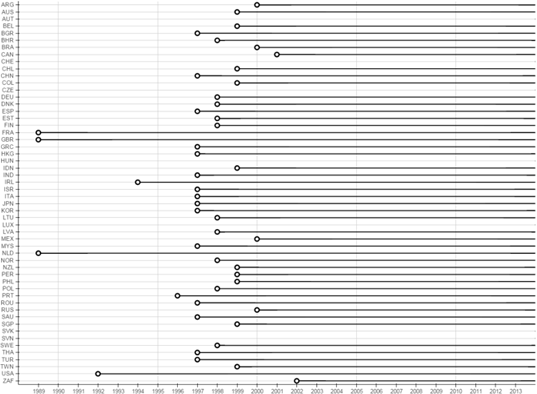 [Click to enlarge]
Notes: This figure shows the year when the countries issuing the 55 currencies of our sample were first connected (point-to-point or via third countries) via a submarine fibre-optic cable to the UK, the US or Japan (i.e., the three countries where the matching servers of EBS/Reuters for electronic foreign exchange trading are located).

Importantly, these cables were not laid for purposes related to electronic foreign exchange trading. Rather, their underwriters foresaw them as efficient and profitable vehicles for long-distance telegraphic communication, telephone calls, fax and internet transmission. Only over time was their utility for electronic trading of foreign exchange and other financial instruments discovered.

Moreover, the shape of the submarine fibre optic cable network is heavily influenced by geography, in that submarine cables (which are an order of magnitude cheaper to lay than terrestrial cables) can only directly connect terrestrial points with access to the ocean. Since cables were laid and came into use at different points in time, the network of active submarine cables provides us with a source of exogenous changes that vary over both space and time.

Our identification strategy capitalises on the special role in electronic foreign exchange trading played by three of the largest financial centres—London, New York, and Tokyo. It is in these cities that the matching servers of Electronic Broking Services (EBS) and Thomson Reuters—the leading platforms for electronic broking and trading—have been located since the early 1990s. It follows that a country's connection to the UK (for London), the US (for New York) or Japan (for Tokyo) via a submarine fibre optic cable reduces latency time and increases bandwidth.

We posit that lower latency and greater bandwidth reduce the importance of spatial frictions such as distance, information asymmetries and domestic market liquidity, and regulatory frictions like capital controls. These effects are analogous to reductions in transportation costs of buy and sell orders involving counterparties in different locations, which will be attractive to high-frequency traders seeking to exploit tiny, short-lived price discrepancies at the millisecond level, but also to other traders. We also posit that lower latency and larger bandwidth reduce the fixed costs of undertaking transactions electronically, insofar as they reduce the costs of aggregating and matching buy and sell orders, as well as the costs of processing information and data more generally.

If lower latency and greater bandwidth matter, they will affect the geography of foreign exchange trading, such as the shares of transactions in a currency that occur onshore (in the issuing country) and offshore (in the major financial centres). Specifically, the reduction in spatial frictions and transportation costs may encourage onshore transactions to move offshore to the major financial centres, in the manner of the standard ‘home market effect’ (Krugman 1980, 1995) and consistent with the Flash Boys hypothesis. The reduction in the fixed costs of trading currencies locally, in contrast, can be expected to increase the attractiveness of transacting through the local sales desk, helping it to retain or repatriate foreign exchange transactions onshore in line with the Flat World hypothesis.

We estimate the effect of technological progress on the location of transactions in 55 currencies between 1995 and 2013, utilising BIS data. We estimate the effect of fibre optic cable connections on whether each currency is traded in the issuing country or offshore, where the effects can operate both directly and also by altering the relative importance of other standard determinants of location such as distance, domestic market liquidity, and regulation.

We find that cable connections between local markets and matching servers in the major financial centres lower the fixed costs of trading currencies and raise the share of currency trades occurring onshore. At the same time, they attenuate standard spatial frictions such as distance, the effect of local market liquidity, and restrictive regulations that otherwise prevent transactions from moving offshore to the major financial centres. Figure 3 shows the results for time zone differences, our measure of information asymmetries. For the currencies of countries in the same time zone as New York, London, or Tokyo, the direct effect enhancing the competitiveness of the local trading desk dominates (the solid line with cables is below the dashed line without, where the vertical axis shows the share traded offshore). For the currencies of countries in very different time zones, the indirect effect dominates—the protection afforded by time zone differences is eroded by the cable (the solid line is above the dashed line toward the right). 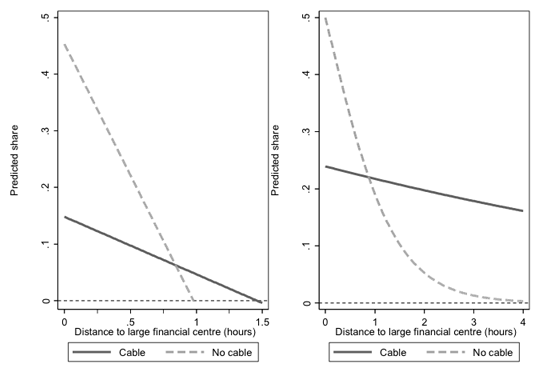 Our estimates suggest that on balance, the second effect dominates—the landscape of the foreign exchange market has become flashier, not flatter. Technology dampens the impact of spatial frictions by up to 80% and increases, in net terms, the share of offshore trading by 21 percentage points. It also has economically important implications for the distribution of foreign exchange transactions across financial centres, boosting the share in global turnover of London, the world's largest trading venue, by as much as one-third.

The lesson from this tale of sharks, cables, and servers is that technology matters, but how it matters depends on who and where you are.

This article first appeared on www.VoxEU.org on January 22, 2016. Reproduced with permission.