Richard DICKENS
University of Sussex, and the Low Pay Commission, UK, and IZA

The minimum wage has never been as high on the political agenda as it is today, with politicians in Germany, the UK, the US, and other OECD countries calling for substantial increases in the rate. One reason for the rising interest is the growing consensus among economists and policymakers that minimum wages, set at the right level, may help low-paid workers without harming employment prospects. But how should countries set their minimum wage rate? The processes that countries use to set their minimum wage rate and structure differ greatly, as do the methods for adjusting it. The different approaches have merits and shortcomings. 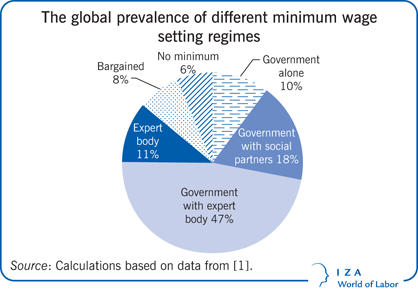 The minimum wage has become an accepted way to tackle the extremes of low pay in many countries, but there is considerable variability in the way minimum wages are set around the world. Methods include formulas, government rate setting, union-bargained rates, and rates recommended by an expert body. Expert bodies whose recommendations are informed by a strong evidence base have the advantage that they can respond to changing economic conditions and build consensus among businesses and workers without political interference. The UK Low Pay Commission is an example of this approach, now emulated by many countries.

This article first appeared on IZA World of Labor in November 2015. Reproduced with permission