Amid growing concerns about labor shortages due to the aging population, the issues of Japan's long work hours mainly among regular employees are drawing increasing attention.

The length of work hours in Japan stands out among industrialized nations. According to the International Labour Organization (ILO) statistics and other sources, the percentage of workers working long hours (defined as at least 49 hours per week) in recent years is about 10%-16% in North America and Europe, but 22% in Japan. These long work hours are a major obstacle for moving forward with the present government's goal to promote the dynamic engagement of all citizens.

If work hours are uniformly long, it is difficult for businesses to take advantage of the valuable workforce that includes women and senior citizens. A shift is necessary for diversity management (so that workers can work to their full potential regardless of gender and age), health management (so that workers can work energetically and for longer years while staying healthy), and work styles that support a work-life balance.

Our research at RIETI indicates that, in Japan, the greater the degree to which a business makes this shift, the higher are its earnings. Our research also shows that one thing common to these shifts is that shorter work hours play an important role (see Figure). Reducing long work hours is important if we are to achieve a society where all citizens are dynamically engaged. It is also an opportunity to reconsider our conventional uniform work styles and try to shift to a better human resource management model, so that workers can create value added more efficiently. 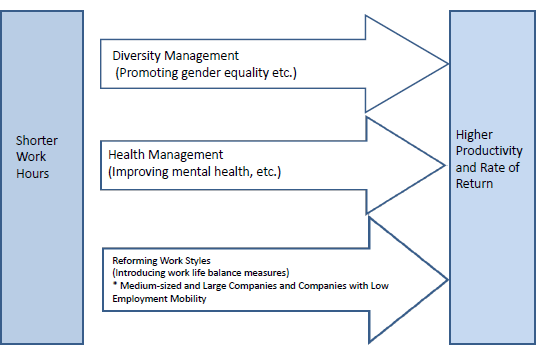 Note: Based on estimation results conducted by Kuroda and Yamamoto

How can long work hours be reduced?

Behind the long work hours are the so-called Japanese employment practices. To some extent, long work hours are necessary in a human resource management model in which the business makes a human investment in its workers over the long term and gets a return in the form of improved skills. Getting regular employees to work for a long time after they have been trained enhances business productivity. For a business, it is rational to have the regular employees who it has trained work overtime when the economy is doing well, but then cut back on overtime during recessions so that layoffs can be avoided.

This is to say that if this human resources management model itself is changed and a shift is made such that human resources who have cultivated their skills externally can be put to use as needed, we can expect the problem of long work hours to be corrected naturally. However, this shift will be hard to implement if only a limited number of businesses attempt it. The shift will only be achieved when there is more employment mobility in the entire labor market.

However, if Japanese employment practices are to be radically changed, there could be social costs, e.g., massive unemployment during the transition period or impediments related to human resources management within businesses. Thus, it is not at all clear if such a fundamental shift can be made.

On the other hand, there are inefficient aspects to Japan's long work hours that were created under the nation's long-standing employment practices. So the first step to take is to correct the excessively long work hours. Excessively long work hours in this context are long work hours that do not lead to value added and which are the result of workplace cultures that discourage workers from leaving the office even when their work is done, the practice of giving higher evaluations to those who work long hours, work characterized by a vague job description, lack of communication between superiors and subordinates, or other such practices.

In collaborative research with Waseda University Professor Sachiko Kuroda, we estimate that these excessively long work hours amount to several hours a week on average.

What can be done to reduce excessively long work hours? First of all, it is difficult to ascertain which parts of Japan's long work hours are excessive and inefficient. Therefore, it is not easy for either businesses or workers themselves to find corrective measures. For that reason, intervention by the government—e.g., raising the overtime premium or strengthening regulations that cap work hours—is justified.

On the other hand, a "high-level professional system" or "white-collar exemption" is being considered that would change the very concept of extra pay for overtime work and completely eliminate overtime regulations for some workers. Of course, it is possible that more efficient work styles could be realized by separating work hours from performance evaluations, but according to our research, eliminating overtime regulations might not reduce work hours and could in fact lead to longer work hours during recessions.

The key point to strengthening regulations capping work hours is the means of doing so. If businesses reduce their standard work hours, the amount of work that has to be done does not change if the conditions (e.g., the way work is done) remain the same. The only thing that would change is the relative breakdown of standard work hours and overtime work hours. More work time would be counted as overtime as a result, and personnel costs per employee would rise. In turn, businesses would reduce employment and have their more limited staff work longer hours. So work hours would be unlikely to fall.

In contrast, if strict caps were put on total work hours or overtime hours instead of standard work hours, or if those caps were substantively lowered, it is very possible that the problem of excessively long work hours could be corrected, because such changes would not lead to higher personnel costs per employee. Moreover, these are changes that individual companies can implement without waiting for the government to change the law. In fact, businesses that have pioneered such changes have been reducing work hours.

If regulations that cap total work hours are strengthened, individual businesses and workers must reconsider their work styles and the nature of their work as work hours decline, and they must try to increase their productivity.

If all the business does is only reduce total work hours, it will diminish the value added it produces and its own competitiveness. However, if it can shift to more efficient work styles that produce the same value added in fewer work hours, the result will be higher productivity per hour. In other words, firms should not see shorter work hours as an objective, but as a means to raising productivity. When businesses stop to consider what kinds of work styles will allow them to complete their work in fewer hours, it could help them discover cases of excessively long work hours and provide clues on how to correct the situation.

It will be important for businesses to try to figure out, by trial and error, how much of a reduction in work hours will lead to a discovery of efficient work styles as they take initiatives at the company and workplace level.

Even with regulations capping total work hours, there will be no reduction in work hours unless most businesses comply. Japan is said to have so-called "black companies" that illegally force employees to work long hours. In theory, such companies would fail to attract employees and would naturally be culled from the market. The reason this has not happened is that Japan has such poor labor mobility, which keeps the labor market's check function from working. Under those circumstances, the government has to take control in place of the market, intervening to ensure thorough legal compliance.

The problem of "zombie companies"—businesses that cannot get out of debt and depend on banks or other funding sources for their survival—has already been recognized. It is fair to think of black companies as "employment-type zombie companies," in the sense that they cannot make a profit unless they illegally force their employees to work long hours. Eliminating employment-type zombie companies is also an important policy issue for the sake of reducing work hours and raising productivity per hour nationwide.

Aside from strengthening government control, it would be best to promote financing and doing business with companies that do not engage in excessively long work hours, and to introduce a commendation system for such companies.