Servitisation and manufacturing firms without factories in Japan

The shifting balance between manufacturing and service industries in developed economies has significant implications for long-term growth and international trade. This column uses Japanese firm-level data to analyse the impact of 'factoryless goods producers' on overall productivity. As these producers specialise in tasks in which advanced economies have a comparative advantage, it is anticipated that when combined with falling production costs and trade liberalisation, they will contribute to economic growth.

International fragmentation of production and the deepening of global value chains (GVCs) have been advancing rapidly. In parallel with these trends, manufacturing firms in advanced countries outsource fabrication processes to low-cost countries, thus 'servitising' their domestic activities. 'Factoryless' goods producers (FGPs) are the ultimate form of servitised manufacturing firms. On the other hand, a widely accepted view among policymakers is that maintaining domestic mother factories is necessary for preserving and enhancing the ability to develop new products. From this perspective, FGPs may be regarded as an undesirable form of manufacturing firms.

In advanced countries, the economy's share of the service sector is increasing while the manufacturing sector is decreasing. In parallel with this structural transformation of the industrial structure, the activities of manufacturing firms tend to servitise. In vertically fragmented value chains, manufacturing firms in advanced countries tend to specialise in tasks located at both ends of the smile curve. Upstream activities such as the development and design of products and downstream activities including marketing and after-sales services are profitable, relative to the fabrication process located in the centre of the smile curve. These service-producing activities are typical skill-intensive tasks conducted by a highly educated workforce. Manufacturing firms in Japan are no exception.

In the US, the increase in the number of FGPs has attracted attention from researchers and statistical agencies (Kamal et al. 2013, Bernard and Fort 2015). According to recent studies, these firms are generally classified as wholesalers, but they engage in product design, production process coordination, and marketing—which are very different from the activities of traditional wholesalers.

In Japan, firms with similar characteristics to FGPs are often found in the retail sector. First Retailing Co. Ltd. (UNIQLO), Nitori Co. Ltd., and Ryohin Keikaku Co. Ltd. (MUJI) are well-known examples. UNIQLO, a specialty store retailer, produces its products by contracting factories in China. Nitori produces furniture and home fashion products in low cost Asian countries such as Indonesia and Vietnam, but it actively engages in the planning and development of products in Japan.

In spite of the potential importance of the FGPs, their economic significance and characteristics have not been well studied. In order to fill the paucity of research, we analyse Japanese FGPs using data from a representative annual statistics for a large number of Japanese firms (Morikawa 2016).

Specifically, we use micro data from the Basic Survey of Japanese Business Structure and Activities (BSJBSA) conducted by the Ministry of Economy, Trade and Industry. An advantage of using the BSJBSA is that it collects information on firms' domestic/overseas outsourcing of manufacturing activities (i.e. purchases of contract manufacturing services), as well as their sales figures and the number of domestic/overseas subsidiaries by 3-digit industry classifications. By using the information, we define an FGP as a firm satisfying all of the following three conditions:

Among the sample of more than 30,000 firms in the BSJBSA, there were 451 FGPs in 2013 and the number is gradually increasing. Interestingly, about 50% of FGPs are classified in the information and communications technology industry, followed by wholesale (about 30%), services (about 10%), and retail (about 10%) industries. This finding suggests that focusing only on firms classified as wholesalers or retailers may overlook many FGPs.

Characteristics of FGPs in Japan

The mean firm size of the FGPs is about 40% larger than that of non-FGPs, after adjusting for the differences in industry. Labour productivity and total factor productivity of the FGPs are about 10% higher than those of non-FGPs, after controlling for industry and firm size (Figure 1). In addition, the wage level of FGPs is about 8% higher. All of these differences are statistically significant at the 1% level.

Figure 1 Productivity and Wages of FGPs 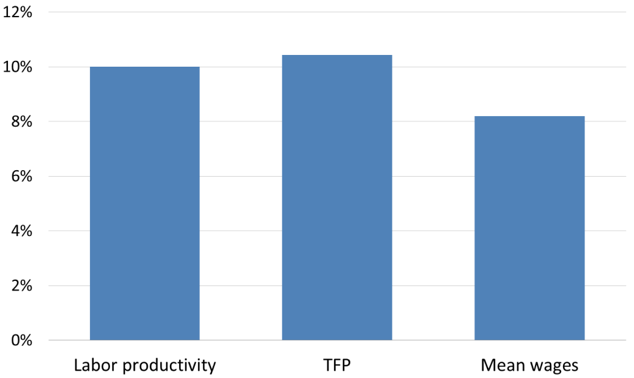 Note: The figures are calculated from the BSJBSA for the fiscal years from 2009 to 2013. The bars indicate the differences in productivity and wages between FGPs and non-FGPs, after controlling for firm size (log employees) and 3-digit industry classifications.

Interestingly, FGPs are more active in intangible investments, including research and development, and have relatively large headquarters functions (Figure 2). Headquarters conduct a wide range of strategic activities, including the decision to introduce new products and services, the choice of investment projects, and human resources management. Recent studies on Japanese firms indicate that headquarters functions contribute positively to the TFP of these firms (Morikawa 2015). Thus, the large headquarters of FGPs are consistent with their higher productivity. 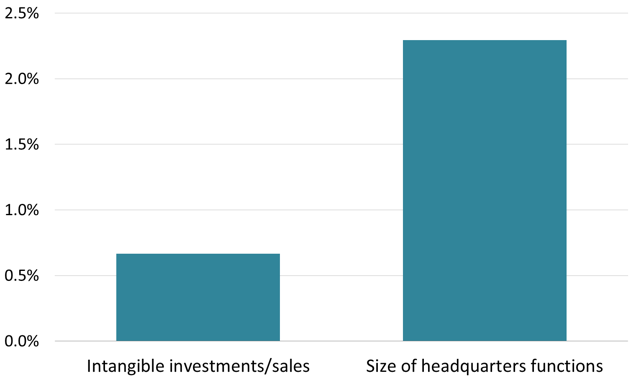 In short, FGPs are modern firms specialising in tasks where advanced economies have comparative advantage. It is anticipated that further reduction in transport and communication costs, combined with trade liberalisation through comprehensive economic partnership agreements such as the Trans-Pacific Partnership, will accelerate the fragmentation of production and the deepening of GVCs. Under these circumstances, servitisation of manufacturing firms and the growth of FGPs will contribute to the performance of the Japanese economy.