East Asian economies and financial globalisation in the post-crisis world

In the aftermath of the Asian financial crises in the late 1990s and the early 2000s, many Asian emerging market economies started rapidly increasing their international reserve holdings. This column assesses the East Asian economies' openness to cross-border capital flows and exchange rate arrangements over the past decades. Financial globalisation has made asset prices and interest rates in these economies more vulnerable to global movements of capital, and to US monetary policy. If China succeeds in efforts to internationalise its currency, the dynamics between the US and Asia will most likely change. For now, however, the Asian region's international finance continues to be dollar-centric. 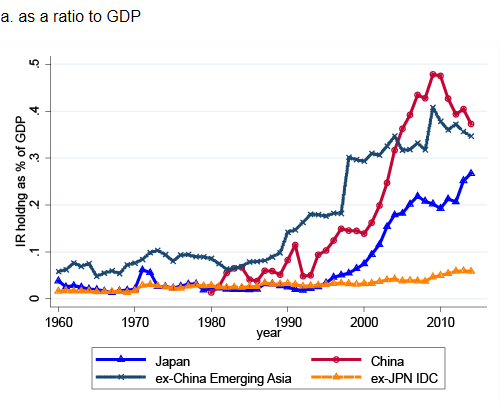 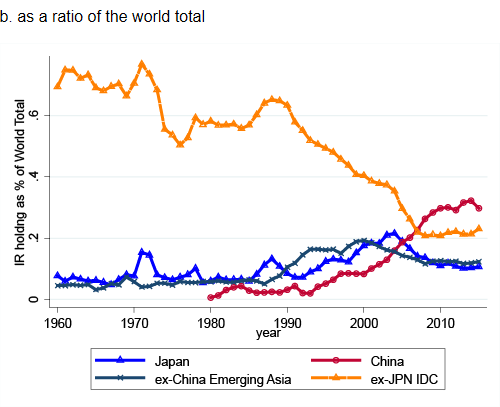 Ironically, this active accumulation of international reserves, in retrospect, sowed the seeds for the world economy to provide ample liquidity for advanced and profligate economies, which eventually led to those economies' bubbles and busts in the late 2000s. Furthermore, increased dollar liquidity has made EMEs more vulnerable to US policy changes, thus making it appear as though economies are subject to "global financial cycles" (Rey 2013). In other words, it was a self-fulfilling prophecy that EMEs' efforts to hold international reserves to ensure self-insurance or protection ended up creating an environment in which these economies needed insurance or protection.

Against this backdrop, in a recent paper we assessed the East Asian economies' openness to cross-border capital flows and exchange rate arrangements in the past decades, with the main focus on EMEs in the region and found several interesting characteristics about the economies (Aizenman and Ito 2016).

One useful way of evaluating open macroeconomic policies is to observe the macroeconomic conditions and policies through the lens of the ‘impossible trinity’, or the ‘trilemma’—Mundell's hypothesis that states that a country may simultaneously choose any two, but not all, of the three goals of monetary independence, exchange rate stability, and financial integration.

Figure 2 illustrates that Asian EMEs have converged to middle-ground levels in each of the three trilemma policies. While this trait can be observed among many EMEs, Asian EMEs distinctly have experienced such middle-ground convergence since as early as the 1980s while appearing to maintain such a coordination through holding high levels of international reserves. These characterisations are not applicable to other economies such as Latin American economies and the Eurozone economies. Despite medium levels of financial openness, many Asian EMEs have also had their asset prices and interest rates increasingly vulnerable to global movements of capital. In Rey's view (2013), the centre country's monetary policy influences these economies' national monetary policies through capital flows, credit growth, and bank leverages.

Figure 2 The ‘Diamond Charts’: Variation of the Trilemma and International Reserve Configurations Across Different Country Groups 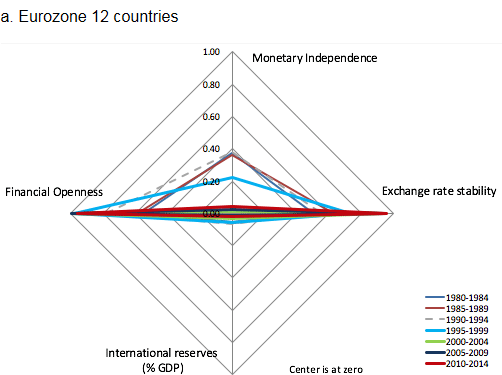 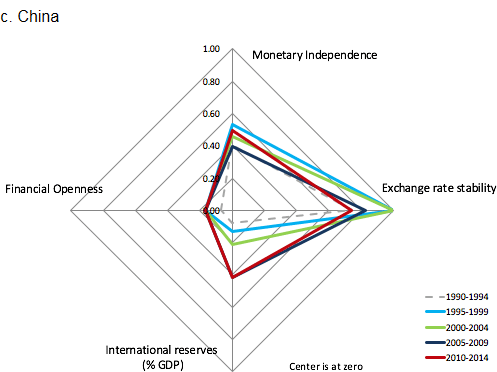 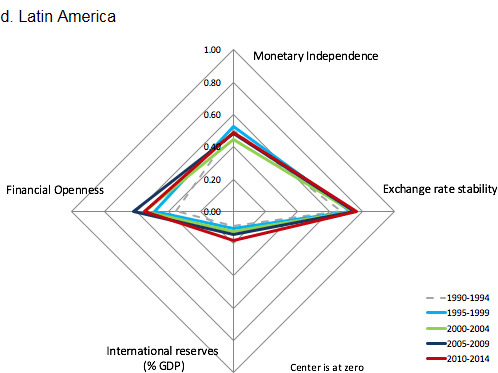 Figure 3 illustrates that the volumes of capital flows to EMEs tend to rise when the risk appetite is higher (i.e. a lower VIX index). Prior to the Global Crisis, a large volume of capital flowed into EMEs, though this was followed by massive capital outflows once the Crisis broke out. However, the capital flow became reversed with massive capital flowing back to EMEs again once advanced economies implemented zero, or extremely low, interest policies to fight recessionary situations. 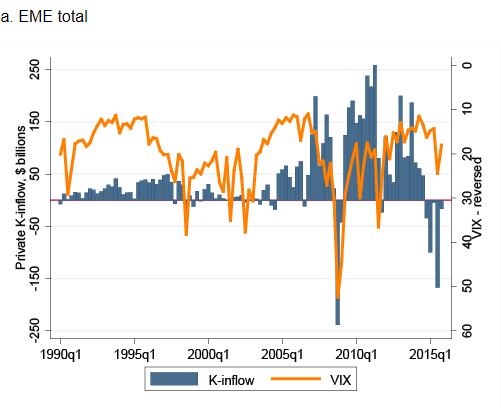 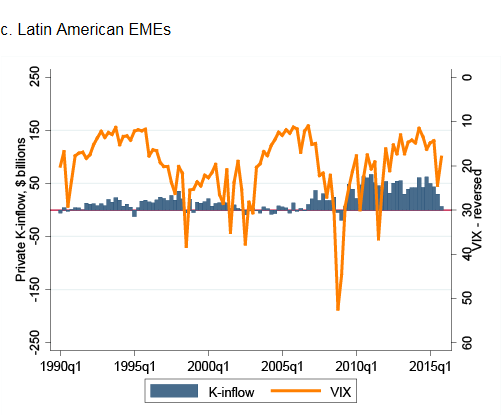 This generalisation of ebb and flow of capital applies well to Asian EMEs, though not to the other regional groups of EMEs. Both the full EME sample and the subsample of Asian EMEs also show massive capital outflows once the US started downsizing its unconventional monetary policy in 2014. In short, Asian EMEs are more directly subject to the level of risk appetite and US monetary policy.

However, it is not (just) the US that has so much significant influence on the Asian economies. It is also the dollar that has been overwhelmingly important for these economies.

That is reflected in high levels of reliance on the dollar as a trade invoicing or settlement currency. In Korea, Thailand, and Indonesia, 80% or more of the countries' exports are invoiced or settled in dollars. Even in Korea, the largest economy after China and Japan in the region, the dollar share is about 85%. Japan has half of its exports invoiced in dollars despite its long-time efforts to make the yen one of the major international currencies (Figure 4a) (Note 2). This is understandable considering that webs of extensive and intensive supply chain networks exist in Asia with most of their exports aimed at the US as the final market.

Figure 4 Heavy Reliance on the Dollar 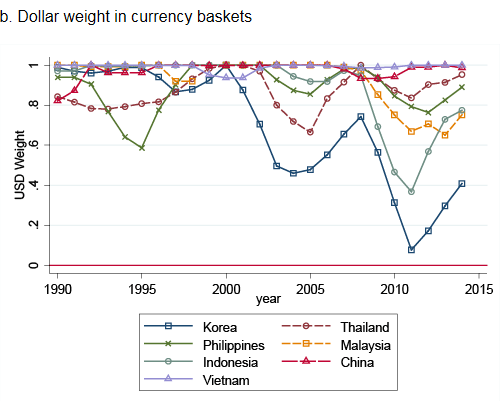 The high reliance on the dollar is also observed in the weights of the currencies included in the implicit currency basket on which policymakers base their exchange rate or monetary policy decisions. Figure 4b illustrates that, with the exception of Korea and Malaysia in recent years, Asian EMEs have had high dollar weights in their implicit currency baskets, indicating these economies belong to the ‘dollar zone’, for which the monetary and financial conditions of the dollar matter most (Note 3).

Among these economies, the dollar share is also high when they issue international debt securities (Figure 4c). It is interesting that, although currency mismatch was one of the biggest problems for the crisis economies in 1997-1998, the extent of the reliance on the dollar has not changed much since then (Note 4).

Figure 5 Changing Trade Structure and Stable Reliance on the Dollar 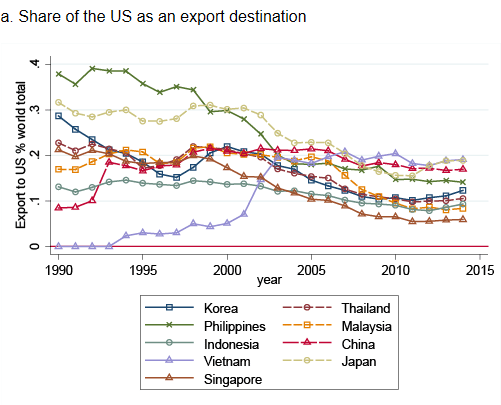 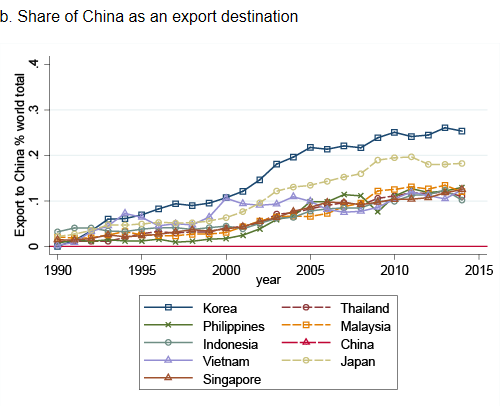 When we estimate the share of trade (i.e. exports plus imports) for each of the four currency zones we identify, interestingly, the share of trade with the 'dollar zone' economies has been quite stable over time, ranging from 50% to 70% across countries (Figure 5c) (Note 5). The share of ‘dollar zone’ trade for Japan has been quite high, ranging from 62% to almost 80%, though the country is an issuer of one of the four major currencies.

Thus, despite the declining share of trade with the US, the dollar continues to be influential for the Asian economies, explaining why they are susceptible to shocks arising in the US financial markets despite their intermediate levels of financial openness.

The continuing importance of the dollar is partly driven by the fact that China is quite a dollar-oriented economy. Clearly, China's increasing presence as a trading partner for Asian economies has replaced some of the US presence. Thus, if China succeeded in 'internationalising' its currency, the yuan (RMB), and forming its own currency zone, the picture in Figure 5c could change significantly.

Now the question is whether and to what extent the RMB will become an international currency. Rising Chinese income levels and the country's role as a major global trading country will help the RMB to become more widely used in the global markets (Note 6). However, two uncertainties warrant attention regarding the future of the RMB as a dominant, key international currency.

Second, China is surrounded by countries that belong to the dollar block. Ito and Kawai (2016) find that the extent to which a country belongs to one of the major currency zones affects its decision to use that currency for trade invoicing. This explains why the yen has not been used as a trade invoicing currency by Japan or by neighbouring economies; almost all of Japan's neighbouring countries belong to the dollar zone (Note 7). China will face the same challenge. The number of China's neighbouring Asian countries that will break away from the dollar block and start using the RMB for international trade and financial activity is key to the RMB's further internationalisation. For now, the Asian region's international finance continues to be dollar-centric. The architecture of Asia's open macroeconomic policies is very much dependent upon that assumption, but facing the biggest challenge.