The substitution of human labour by artificial intelligence and robots is a keenly debated topic. Some claim that a substantial share of jobs is at risk, while others argue that computers and robots will lead to product innovations and hence to unimaginable new occupations. This column uses a survey of Japanese firms to examine the impact of AI-related technologies on business and employment. Overall, firms expect a positive impact on business but a negative impact on employment. Firms with a highly skilled workforce, however, have a more optimistic view than firms with lower skilled employees.

Since the second half of the 1990s, productivity growth has accelerated in the US due to the Information Technology (IT) Revolution. However, the productivity effects of traditional types of IT were exhausted by mid-2000 (e.g. Fernald 2015). Today, the impacts of artificial intelligence (AI) and robotics―referred to as the Fourth Industrial Revolution―on the future economy and society is attracting attention, and many speculative arguments have arisen regarding the possible effects of the Fourth Industrial Revolution. In particular, the substitution of human labour by AI and robots is being hotly discussed.

The Japanese government has begun efforts to develop and diffuse AI and robotics technologies. The Robot Revolution Initiative Council was established in 2014 and has published a report, New Robot Strategy, which includes a five-year action plan to realise the robot revolution. The Artificial Intelligence Research Center was established in the National Institute of Advanced Industrial Science and Technology (AIST) in 2015 to promote development of AI-related innovations. The Japan Revitalization Strategy 2016, which is the core growth strategy of Abenomics, places the Fourth Industrial Revolution at the top of the growth policy agenda.

The impact of AI and robotics on employment

There have been numerous studies on the complementarity/substitutability of IT and the skills of workers. Earlier studies have presented evidence based on the skill-biased nature of IT that indicate skilled labour and IT are complementary, but that unskilled labour and IT are substitutes. More recent studies have shown that IT substitutes for routine tasks conducted by middle-skilled workers, which results in the polarisation of the labour market. Although the discussion about the impact of AI and robotics on employment is a natural extension of the studies on the relationship between IT and labour, quantitative evidence on this issue has been scarce.

The estimation by Frey and Osborne (2013) of the number of jobs at risk to be replaced by future computerisation, including advances in machine learning and mobile robotics, has attracted attention of the media and policy practitioners. According to their study, roughly 47% of total US employment is at risk from computerisation.

On the other hand, Mokyr et al. (2015) survey the historical lessons learned since the Industrial Revolution in the late 18th century and argue that computers and robots will create new products and services and that these product innovations will result in unimaginable new occupations. However, we cannot deny the possibility that the impact of the Fourth Industrial Revolution is different from the past innovations.

Evidence from a firm survey

Against this background, we designed and conducted an original survey of Japanese firms to investigate the impact of AI and robotics (see Morikawa 2016 for details). Specifically, in late 2015, we distributed the Survey of Corporate Management and Economic Policy to a variety of firms operating in both the manufacturing and service industries and obtained more than 3,000 responses. The survey inquiry was wide-ranging, but in this column we focus on the questions about the possible impact of AI and robotics on business and employment. Special attention is paid to the relationship between the skills of human resources and AI-related technologies.

Responses regarding the impact of the development and diffusion of AI and robotics on future business were generally positive—positive responses (27.5%) far surpassed negative responses (1.3%) (Note 1). In contrast, the perception of the impact of AI and robotics on employment is negative—21.8% of firms responded that the development and diffusion of new technologies will decrease the number of employees, and the share of firms expecting positive effects on their employment is notably small (3.7%) (Note 2).

Lessons learned from the IT Revolution are that firms with relatively low-skilled employees are likely to be affected negatively by the new industrial revolution, and those with highly skilled employees tend to reap benefits. To analyse this technology-skill complementarity in the context of AI, we compare the relationship between firms' perceptions of the impact of AI and robotics and the education levels of their employees (see Figure). 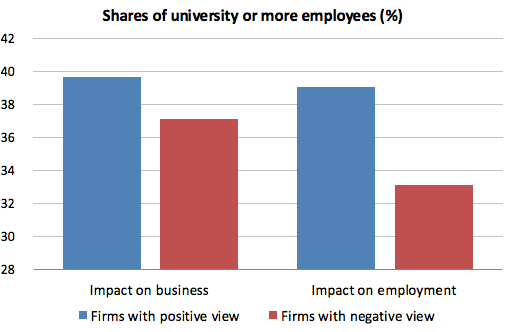 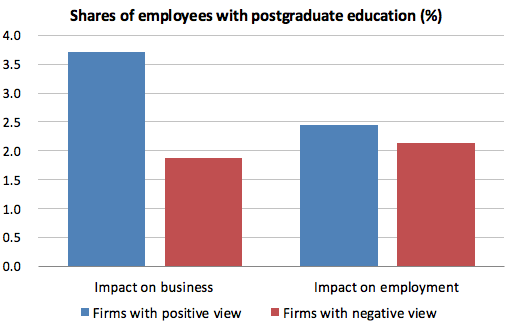 Source: Calculated from the Survey of Corporate Management and Economic Policy (RIETI).

Firms expecting positive effects of AI and robotics on their business have significantly higher ratios of university graduates and employees with postgraduate degrees. Conversely, the ratio of highly educated employees is lower among firms that anticipate a negative impact of AI and robotics on their employment. This technology-skill complementarity is confirmed by formal estimations controlling for other covariates including firm size and industry.

According to a previous study, the return to postgraduate education in Japan already exceeds 10% (Morikawa 2015). The diffusion of AI and robots may further raise the return to higher education unless changes in the education system catch up with the technological progress. In order to accelerate the development and diffusion of AI-related technologies and, at the same time, maintain employment opportunities, it is necessary to upgrade human capital, such as increasing the number of people with postgraduate education.

This article first appeared on www.VoxEU.org on June 7, 2016. Reproduced with permission.