Asymmetric impacts of the WTO Accession on Chinese exporters

The Chinese government significantly restructured and modernised its economy to gain WTO accession in December 2001. This column examines how WTO entry affected different types of firms. It finds that both private and State-owned firms became more productive after WTO entry yet these productivity gains did not translate into a higher propensity to export for State-owned enterprises.

The Chinese government significantly restructured and modernised the economy to meet the WTO standards in December 2001. The openings mandated under China's WTO accession agreement made its economy the most open of any large developing country, and China has achieved reasonable progress toward meeting its obligations (Branstetter and Lardy 2008). China's accession to the WTO enabled it to receive the most-favourable-nation treatment, which improved the access of Chinese exporters to foreign markets. In the WTO accession process, the Chinese government was also requested to reduce restrictive measures in the market, including reforming state-owned enterprises (SOEs). China's entry into the WTO was deemed to have a significant impact on Chinese exporters in the 2000s.

There have been many studies on the effects of China's entry into the WTO on its productivity growth. Brandt et al. (2012) showed that the Chinese economy recorded higher productivity growth after WTO accession and that this growth was driven mostly by firms' entry and exit that are increasingly allowed by China's decentralised reforms. Yu and Jin (2014) observed the positive impact of imported intermediate inputs on firm productivity. Nevertheless, we find few studies that examine the different effects that WTO membership on exporters among foreign-invested enterprises, private domestic firms, and SOEs.

The statistics which we calculated from the firm-level data of Chinese electric machinery and equipment, telecommunications equipment, computers, and other electronics equipment manufacturers show that the modes of firms' internationalisation vary across different ownership groups (see Wakasugi and Zhang 2015 for details). After WTO accession (2002-2007), in comparison with the preceding period (1998-2001), a large number of private and foreign-owned firms entered the domestic market, but the number of SOEs dramatically decreased from 2,024 firms to 476. Consequently, while the share in terms of the number of firms rose from 54% to 63% for private domestic firms and from 30% to 33% for foreign-owned ones, the share of SOEs rapidly fell from 16% to only 4%. Assuming a standard theory whereby firms enter the domestic market and export along with a rise of productivity, it is anticipated that the fraction of exporters for SOEs will rise when the number of SOEs decreases. However, Figure 1 shows that, after WTO accession, the fraction of exporters for SOEs has remained at 20%, while that of exporters among private domestic firms and foreign ones has increased from 19% to 22% and 68% to 72%, respectively. Standard conjecture of the relation between productivity and exports cannot be simply supported by Chinese firms after the WTO accession.

Figure 1. Fraction of Exporters by Ownership 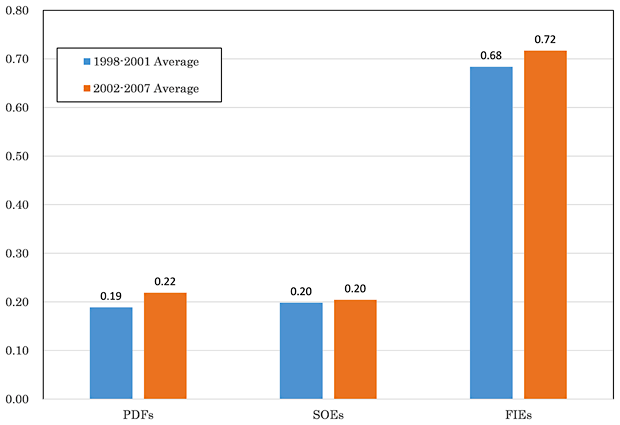 Productivity growth after the WTO accession 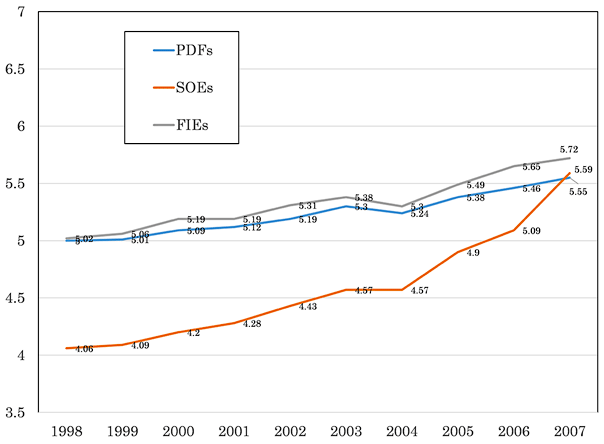 Asymmetric effect of WTO accession on private and state-owned enterprises

Theoretical and empirical studies reveal that firms with higher productivity tend to export (Bernard 1999, Melitz 2003, and Helpman et al. 2004). However, from Chinese statistical data, we find that the standard mode of internationalisation is not simply applicable to Chinese firms' exports after WTO accession. We statistically examined the different effects of the WTO accession on firms' export decision. We use a logit model to estimate the probability to export. After controlling for the debt-asset ratio, government subsidy, and time-varying and region-specific factors, we estimate how the effects of productivity and ownership on firms' export decision changed after the WTO accession, by setting the WTO dummy as zero before 2001 and one after 2002, and FIEs as a default for dummies of PDFs and SOEs. The second column in Table 1 presents the results. It is noteworthy that the coefficient for the interaction term between SOEs and WTO is negative, while the coefficients for the interaction term between TFP and WTO and the interaction term between PDFs and WTO are positive.

Note: The variables for debt-asset ratio, government subsidy, and dummies for provinces/special cities and year are omitted from the table.

Our results suggest that Chinese firms with higher productivity are more likely to export regardless of ownership, and that this relationship increased after WTO accession. Moreover, we find that the effect of WTO accession on exports is asymmetric among different types of ownership--negative for SOEs while positive for private domestic firms.

The growing productivity of Chinese electric machinery and electronics manufacturers after China's WTO accession largely increased their exports. The stylised fact that firms with higher productivity tend to export can be also applied to Chinese firms' exports. But when focusing on the ownership difference, the results of statistical estimation show that the effects of China's WTO accession on firms' exports are not uniform among different ownerships. The effect of WTO accession was negative for SOEs. Policy changes in China aimed to liberalise the domestic market, improve access to foreign market, and reform SOEs after the WTO accession. The asymmetric effect of China's WTO membership on export decision between private domestic firms and SOEs can be interpreted as the result of policy changes in order to remove favourable treatments only given to SOEs for their export promotion and unfavourable conditions given to private firms for their exports before the WTO accession.

This article first appeared on www.VoxEU.org on June 2, 2015. Reproduced with permission.