Continued stagnation of the global economy and political and social disorder

The global economy from the 1990s onwards has enjoyed a period in which the world as a whole became more affluent as emerging countries achieved high growth driven by the rapid growth of the Chinese economy and high oil and resource prices. However, the situation reversed last year, and since then, major changes have come to the forefront. The emerging economies, particularly those of resource-rich countries, currently face difficulties, with the middle and low income countries in the Middle East and North Africa suffering particularly harsh conditions (Figure). 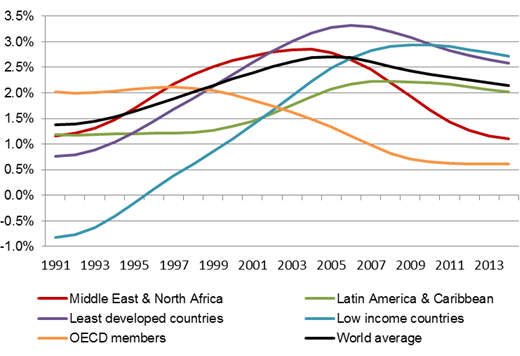 The stagnation of the global economy, especially in emerging economies, will lead to political and social disorder. While there are already many refugees and immigrants in the Middle East and North Africa, it seems that the forecasted state of the global economy in the immediate future will make it difficult to resolve regional conflicts.

Increased social and political disorder around the world must be avoided. One of the most obvious ways to do this is to bring about the recovery of the global economy and lay the seeds for its structural growth.

One of the ways to drive the global economy that fits the needs of developed countries is to accelerate innovation. Coupled with the network society formed through the Internet, technological innovation in hardware and software are making it possible to collect big data and conduct advanced analysis such as deep learning. As a result, developed countries will soon enter the stage in which artificial intelligence (AI) dramatically transforms the economy, industry, and society.

The overall progression of the aging population and maturation of the economic society in major developed countries can also become driving forces in supporting the global economy because these factors can give rise to new social changes. Although it will take time for these changes to become evident, they need to be carried out in a manner that brings even more affluence to people by correcting various imbalances in society through a comprehensive review of the social security system, tax system, regulations, and the norms and recognition of society and people. Correcting imbalances can also help to utilize human resources, physical assets, and capital more efficiently than in the past to achieve better economic growth.

One actual case in which these endeavors can be seen is the welfare state of Sweden. Sweden has introduced a socioeconomic model for enhancing social security while at the same time achieving favorable growth. To maintain the world's highest level of welfare, it asks companies and people to deliver a high level of performance and shoulder a large burden within a market as competitive as that of the United States.

Another means for promoting growth within the global economy is for developed countries to take the initiative in lowering economic borders between countries. The European Union (EU) has eliminated economic borders across a wide area. The elimination of non-tariff barriers and the formation of a single market can be largely traced to the EU's acute awareness of the need to revitalize its economy in order to restore Europe's economic competitiveness which had declined more significantly than that of Japan and the United States during the 1980s.

One other example of lowering economic borders can also be seen in mega free trade agreements (FTAs). The most significant of these is the Trans-Pacific Strategic Economic Partnership Agreement (TPP), in which the member countries make up 11% of the world population and 36% of the global economy. In addition, the TPP is expected to exert a strong revitalizing effect on the economy by not only eliminating non-tariff barriers to the trade of goods, but also barriers in many other areas. The TPP's involvement of both emerging countries and developed countries including the United States and Japan also gives a positive effect on economic growth.

Fortunately, Japan holds a good position in many respects. First of all, Japan is a country that lacks resources, making it one of the greatest beneficiaries of the structural changes occurring in the global economy. In fact, the prices of imported oil and liquefied natural gas (LNG) from January to November 2015 declined by nearly 7.1 trillion yen from the same period of the previous year, helping corporate earnings to hit a record high and reduce household expenditure on energy-related consumption.

In addition, Japan is currently building a new socioeconomic model that will contribute to its economic vitality as well as in other countries. There is an urgent need for women and the elderly to play an active role in a society where the population is aging most rapidly in the world. This task will be completed by making comprehensive and innovative changes across a broad area ranging from regulations, the labor market, and the corporate system to social norms.

When the TPP comes into effect, the Japanese economy will be further globalized. In particular, the effect of revitalizing the economy and the benefits to households brought by globalization will be significant because the ratios of trade and foreign direct investment in Japan to GDP are behind those of other countries.

In light of the structural changes in the global economy, innovations and changes in the socioeconomic model unique to a developed country are extremely important. In this environment, the issues Japan needs to solve, such as the low birth rate and aging population, are quite clear. Japan is blessed with great economic conditions, enabling it to steadily address the problems it faces and contribute to the world.