The annual meeting of Asia-Pacific Economic Cooperation forum leaders was held on October 26 and 27 in Los Cabos, Mexico. One of several events leading up to the APEC summit, the ministerial and senior officials meetings consisted of reports and debates on various activities under the APEC framework. The APEC Economic Committee presented an analysis of the impact of APEC investment liberalization and facilitation, currently a major research topic. Japan - specifically the Ministry of Economy, Trade and Industry -undertook this mission, spending two years on research and analysis, then compiling the results into a report. I led the research team engaged in the actual work. The following is a brief overview of our analysis.

Motivation and Purpose of Analysis

Worldwide, the greatest economic growth in the 1990s occurred in the APEC region. A rising influx of direct foreign investment, expanded production, and rising exports have been cited as driving forces for the remarkable growth in this region. The Asian currency crisis of 1997 provided an opportunity to renew the recognition of the importance of direct foreign investment, which in comparison to opportunistic short-term speculative capital, is stable and contributes to long-term growth.

However, a certain resistance to the idea of investment liberalization in APEC economies persists, due to concerns over the negative impact of such changes on domestic industries. In response to such concerns, we must present the economic effects of investment liberalization and facilitation in both empirical and quantitative terms. The primary purpose of this research is to conduct quantitative analysis. As part of this effort, a mathematical model, a general equilibrium model of global trade, was devised to project economy-wide effects.

One major contribution of this analysis is its quantification of the extent to which trade barriers persist within the APEC region. In proceeding with the trade and investment liberalization called for by the Bogor Declaration, each APEC member economy annually reports on its progress in an individual action plan (IAP). Our analysis attempted to quantify the investment barriers reported in relation to these IAPs.

The term "investment barriers" refer to all government policies and measures that influence investor choices as to how and where investments are made. According to the United Nations Conference on Trade and Development, investment barriers can be categorized by the investment aspect they most affect - establishment, ownership and control, or operations. We quantified the 2001 IAP data by frequency and coverage measures, which were also used in past analyses. This approach enables quantitative inter-regional or inter-industry comparisons of the extent of existing trade barriers.

The quantified results show that most APEC economies to a certain extent retain barriers in certain respects. Only in Hong Kong and New Zealand are these barriers virtually absent for the overall range of industrial sectors. By sector, investment barriers tended to be higher in service industries such as transport, telecommunications, and financial and insurance services. 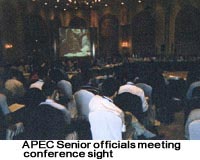 Investment liberalization and facilitation and the subsequent increase in capital stock would boost overall GDP in the APEC region by some 0.3 percent, based on conservative estimates. Such measures would also boost trade volume within the APEC region by around 0.5 percent. These results indicate that increased foreign direct investment would create, not destroy, trade.

Our analysis has certain major limitations. Because IAPs are based on data voluntarily presented by each APEC economy, they are not necessarily accurate and information consistency among different member economies cannot be ensured. The possibility remains that the extent of investment barriers as quantified in this analysis may be based on an imperfect econometric foundation.

It is our hope that the information contained in IAPs will become more comprehensive and rigorous, enabling more accurate economic analyses - and even more important, to allow us to determine where we stand with respect to the goals set forth in the Bogor Declaration.

At this time, IAP data reflects actions taken in each APEC economy. This data is renewed annually. These actions should be reevaluated on a regular basis.