Perspectives from Around the World 067

Since the Global Crisis, cross-border lending among banks and its role in the transmission of financial shocks have gained a lot of attention. This column describes evidence from direct and indirect lending exposures among a large number of banks. The findings show that a larger number of exposures to banks in countries experiencing a systemic banking crisis reduces profitability and the supply of new credit. Both direct and indirect connections have economically significant effects, supporting the notion that interconnected systems are prone to shock transmission.

The interconnectedness of the global financial system is widely believed to have deepened the Global Crisis (Gros 2010). In spite of a fast growing and vibrant literature on financial stability and systemic risk, evidence on the propagation of shocks through cross-border interbank exposures remains scarce. The main reason is that data on the exposures of individual banks to counterparties in foreign markets are typically unavailable for academic research. We overcome this hurdle by constructing exposures from data on long-term interbank lending and matching them with banks' financial statements.

To study financial sector shock transmission among banking systems, in a recent paper (Hale et al. 2016) we use data on interbank loans extended by bank syndicates from Dealogic's Loan Analytics. Compared to standard interbank loans, syndicated interbank loans are larger and have longer maturities. The average loan amounts to $500 million and has a maturity of five years. Using detailed information on the lender, borrower, their locations, and the terms of each loan, we construct a global banking network of bilateral exposures among more than 6,000 banks for each year during 1997-2012. We then split these exposures into two groups: exposures to banks in countries experiencing a systemic banking crisis ('crisis exposures'), and exposures to banks in countries not in crisis ('non-crisis exposures') (Note 1). 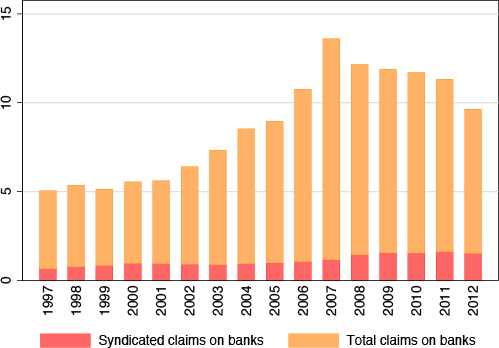 The left panel of Figure 2 depicts a visualisation of the network of syndicated interbank lending at the peak of the market in 2007 for the 100 largest banks in our sample. We can see that global systemically important banks are among the most active players in this network. For instance, in 2007 Citigroup had syndicated loan exposures vis-à-vis 198 banks in 62 countries. In the decade prior to the Global Crisis, the degree of connectivity in this network increased gradually, but it declined significantly by 2010 as many loans were not rolled over during the Crisis (right panel of Figure 2).

[Click to enlarge]
Notes: This figure depicts visualisations of the global banking network in 2007 and 2010 for the largest 100 banks (based on 2007 assets) that were lenders, borrowers, or both. Blue nodes are banks in OECD countries and red nodes are banks in non-OECD countries. Edge colour is darker for larger exposures. Larger nodes indicate larger banks. For visibility, only the names of selected banks are shown. The position of the nodes in the network is ad-hoc.
Data sources: Loan Analytics and Bankscope.

We begin by showing that a larger number of direct crisis exposures is associated with lower return on assets (ROA) for banks. Holding the total number of exposures constant, an additional direct exposure to just one bank in a crisis country reduces bank ROA by 0.03 percentage points in the same year. How large is this effect? For a bank balance sheet that is levered 30 times, an ROA reduction of 0.03 percentage points becomes an ROA reduction of 0.9 percentage points—an economically significant effect. For a bank with total assets of $1 trillion, an additional crisis connection would translate into a reduction in returns of $300 million per year.

An even more important question, however, is whether the decline in profitability caused by crisis exposures translates into a measurable effect on the supply of new loans, with potential consequences for the real economy. We find that it does. Holding the total number of exposures constant and turning ten direct non-crisis exposures into crisis exposures reduces a bank's supply of syndicated loans to non-financial firms by slightly more than 2%. Indirect exposures have a similar effect on loan supply as they do on bank profitability, with additional negative or mitigating impacts. Interestingly, the indirect effect is larger for cross-border loans than for domestic loans.

How is bank profitability impacted?

An immediate channel through which interbank exposures may affect profitability is losses due to direct credit risk. Losses could stem from outright defaults, which are rare for syndicated bank loans, as well as loan restructurings. Both of these events would erode a lender's profit margins. Indeed, when we look at net interest margins (NIMs), we find that a larger number of direct crisis exposures is associated with lower NIMs. Interestingly, this squeeze in net interest margins can explain about half of the impact of an additional crisis exposure on ROA, which suggests that additional factors related to our interbank exposures may be at play.

One potential factor is the 'country risk' captured by the interbank exposures. Due to adverse macroeconomic and political developments in the foreign borrower's market, the lender may experience a more general loss of business from that market, a higher cost of funds, and even a creditor run. The country risk dimension is probably strengthened by exposures that are correlated with syndicated interbank exposures, but were omitted from our analysis. In fact, for US banks, syndicated interbank exposures to foreign markets are highly correlated with total exposures to foreign markets, which also include shorter-term and bilateral interbank loans, holdings of foreign securities, trade credit, loans to non-financial firms, and other bank assets. Such exposures increase the potential impact of country risk when the foreign market is in crisis. Thus, we can think of exposures created through the syndicated loan market not only as conduits of financial sector shocks, but also as proxies for difficult-to-measure bank exposures.

Are banks able to shield their balance sheets from trouble in the foreign markets where they conduct business? The answer is no. We employed detailed data on loan transactions in the syndicated interbank market to analyse the effects of direct and indirect exposures to banks in countries that experience a systemic banking crisis on lender profitability and loan supply. The analysis revealed cross-border interbank lending is one of the pathways for the transmission of banking crises across countries. Exposure to foreign markets that experience financial turmoil impairs banks' profitability, and in turn their ability to conduct their primary function of financial intermediation. Our findings point to important interactions between interbank exposures and the real economy, which continue to deserve careful study.

Authors' note: The views expressed here are those of the authors and do not necessarily represent those of Fannie Mae, the Federal Reserve System, or the International Monetary Fund.

This article first appeared on www.VoxEU.org on April 28, 2016. Reproduced with permission.