The turmoil facing the U.S. financial system is, in some regards, coming to resemble Japan's banking system crisis of the late-1990s and early-2000s. This suggests that some lessons may be drawn from Japan's handling of the situation. RIETI Senior Fellow KOBAYASHI Keiichiro has drawn some parallels. Since he published his book Nihon keizai no wana [Trap of the Japanese Economy] (with Sota Kato, in Japanese) in 2001, Dr. Kobayashi has had numerous commentaries published in the Japanese media on Japan's financial crisis, while continuing his theoretical research in macroeconomics. This month RIETI Report shares his analysis of the subprime loan problem and his policy recommendations.

Dr. Kobayashi has been a Fellow since RIETI's establishment in April 2001. His research pursuits include endogenous growth theory, general equilibrium, business cycles, and the non-performing loan problem. Dr. Kobayashi is also a Visiting Professor at Chuo University and a Lecturer of the Institute of Economic Research at Kyoto University. Prior to joining RIETI, he worked with the Industrial Policy Bureau at the Ministry of International Trade and Industry (MITI). His book, Nihonkeizai no wana [Trap of the Japanese Economy] (Nikkei Publishing, 2001) won the Nikkei Economics Book Award, one of the most prestigious awards for young economists in Japan. Dr. Kobayashi holds an M.S. in Mathematical Engineering from the University of Tokyo and a Ph.D. in Economics from the University of Chicago. His recent major publications include: "Payment Uncertainty, the Division of Labor, and Productivity Declines in Great Depressions," Review of Economic Dynamics, vol. 9, no. 4 (2006); "Forbearance Impedes Confidence Recovery," Journal of Macroeconomics, vol. 29, no. 1 (2007); and "Business Cycle Accounting for the Japanese Economy," Japan and the World Economy, vol. 18, no. 4 (2006).

Housing prices in the United States could continue to fall for many years to come. Losses could grow and eventually lead to bank insolvencies. Once the fear of prospective insolvencies in U.S. financial institutions spreads in the market, ordinary monetary policy becomes powerless since liquidity provision works only if all financial institutions in the payment network are solvent. With the problem being in the payment system, fiscal policy to save mortgage borrowers cannot restore market confidence. Capital augmentations by banks themselves only buy time but cannot stabilize the financial system if the market feels that bank insolvencies are inevitable. A payment system facing insolvencies becomes caught up in a game of musical chairs, in which each party tries to push the prospective losses on the others. To stabilize the payment system, the U.S. government should eliminate fear in the market. One promising policy plan is to set up a scheme and a sufficient public fund for capital injection into banks in the case of insolvencies. This scheme would stabilize the market by eliminating fear, and public funds would not actually be injected into banks.

The financial problem associated with U.S. subprime loans is becoming a global economic problem. Arguments are increasing from Europe and Japan that this is the beginning of the end of the U.S. globalization system and may become a serious international political problem if it persists over a long period. We may recall that political support of fascism and communism grew in certain parts of the world 80 years ago because the international great depressions in the 1930s invoked serious feelings that global capitalism was collapsing. Therefore, resolving today's financial crisis quickly may not merely be a problem of U.S. economic policy but should be considered an urgent action point for stability of the international community as a whole.

How far will housing prices in the U.S. fall? If we base our projections on the trend line during the 1990s, they will pick up by 2012 at the latest. But this reasoning reminds me of a similar mindset in early-1990s Japan. When Japan's real estate bubble burst in 1991, the trend line indicated that land prices would bottom out around 1995, when in fact they continued to decline steadily for 12 more years, until 2007. 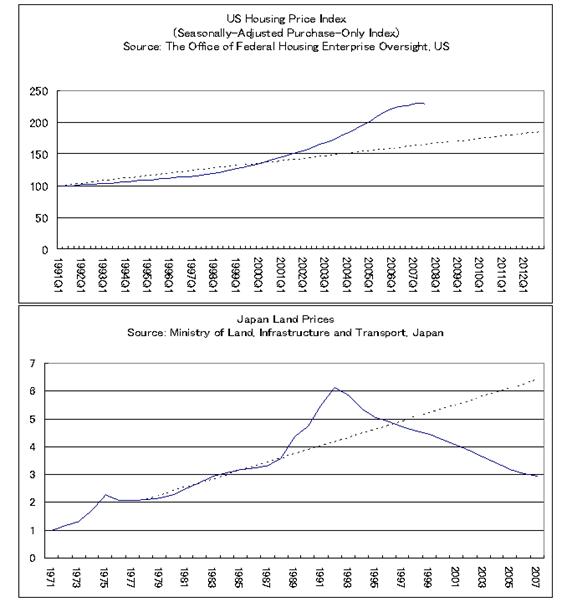 Enduring wishful thinking that land prices would soon recover, and the subsequent disappointments, paralyzed Japanese banks and policy-makers and brought on a full-fledged banking crisis in 1997-1999.

At the beginning of the 1990s, Japanese policy-makers and banks believed that the problem was perfectly under control and that the banks then holding huge unrealized capital gains could easily overcome losses from disposals of bad loans, just as their U.S. counterparts believe so today. We may recall that all of the world top-10 banks (measured by amount of deposits) in 1989 were Japanese. Although Japanese banks were hit by a huge number of nonperforming loans as a result of the collapse in land prices, the primal prescription then was self-help by the lending banks, which is basically the same prescription adopted in the 2008 February G-7 meeting for U.S. financial institutions. Nobody anticipated that Japan's land prices would continue to fall for 17 years but this actually happened. I believe that the continuous fall in land prices was a result of a vicious circle brought on by the inaction of policy-makers at the outset of the problem.

The point is that housing prices could cease to fall soon or they could continue deteriorating for years. Both scenarios could be self-fulfilling and which of them will be materialized depends upon policy actions now. Japan's experience tells us that policy-makers should prepare for a worst-case scenario in which a vicious circle continues. My concern is that economic policy-makers in the U.S. and other G7 countries seem to have chosen a wait-and-see policy on the U.S. financial system, laden with risky and wishful thinking. (continued...)

For a complete list of past and upcoming event information.

Fellow titles and links in the text are as of the date of publication.

For questions or comments regarding RIETI Report, please contact the editor.

*If the "Send by mailer" button does not work, please copy the address into your email "send to" field and connect the prefix and the suffix of the address with an "@", sending it normally.