Understanding the Flow of Electronic Parts and Components in East Asia

The value of intra-Asian trade in electronic parts and components (ep&c) equaled $300 billion in 2014. The volume of electronics intermediate goods traded within the region has increased sixfold since 2001. As Figure 1 shows, Taiwan and South Korea are the leading exporters. Their shares and China's share in ep&c trade have increased, while that of the Association of Southeast Asian Nations (ASEAN) has decreased.

This paper investigates this exploding trade in ep&c. In principle, the flow of electronic parts and components should depend on several factors. Electronic parts and components such as semiconductors are key inputs into computers, cellphones, and consumer electronics products, and the value of these final goods exports from East Asia equaled $750 billion in 2014. One key driver of regional ep&c trade should thus be demand in the rest of the world for tablet computers, smartphones, and other electronic devices produced in Asia. Integrated circuits, accelerometers, and other inputs into electronic devices are also sophisticated, and the technology advances relentlessly. A second driver of exports may thus be the level of technology in a country. Fabricating ep&c also requires massive capital investment, and a single machine the size of a photocopier that is used to fabricate microprocessors can cost $50 million. Thus, capital investment may increase ep&c production. In addition, foreign direct investment (FDI) can facilitate the production of sophisticated goods by channeling superior technologies to emerging countries.

Finally, the exchange rate can influence the flow of electronic parts and components exports in two ways. First, a depreciation in the exporting country can lower the dollar prices of the exported intermediate goods that in turn can lower the dollar prices of the final electronic goods and increase the volume of their exports. Second, a depreciation in one Asian exporting country may increase the country's price competitiveness relative to its neighbors and increase its share of ep&c exports.

This paper investigates both the level of ep&c exports and the shares of these exports among Asian supply chain countries. Increases in the levels reflect cooperation within the region, as countries export more parts and components to supply chain partners for processing and re-export. Increases or decreases in the shares reflect competition within the region, as countries gain or lose market share relative to other East Asian countries.

The results indicate that there is a tight relationship between ep&c trade within the region and East Asia's exports of final electronics goods to the world. They also indicate that the stock of FDI helps to explain the level of trade to East Asian neighbors. Thus, FDI promotes the slicing up of the value chain in Asia. The degree of capital intensity explains the share of ep&c exports. Thus, one reason why South Korea and Taiwan have played an increasingly important role within the electronics value chain (EVC) is because they have invested heavily in plant and equipment. Weaker exchange rates also significantly increase both the share and the level of ep&c exports from a country.

There are several lessons for Japan from these results. One is that FDI helps neighboring countries to participate in regional value chains. Since joining East Asian value chains promotes technology transfer and development, this finding can help policymakers as they consider strategies for Japan's outward development assistance. A second lesson is that China, South Korea, and Taiwan are not only Japan's comrades in regional value chains; they are also increasingly strong competitors in this technologically advanced industry. Japanese policymakers may want to consider how to promote the electronics industry (e.g., by funding research and development) and to prepare for layoffs and dislocation in this sector. A third lesson is that exchange rates in the region are vitally important for the electronics industry. Given the importance of this industry, this provides one more reason for policymakers to focus their minds when devising exchange rate policy and engaging in policy discussions on exchange rates with neighboring countries (Note 1).

Figure 1. Share of Electronic Parts and Components Exports from Individual Economies to the Region as a Whole 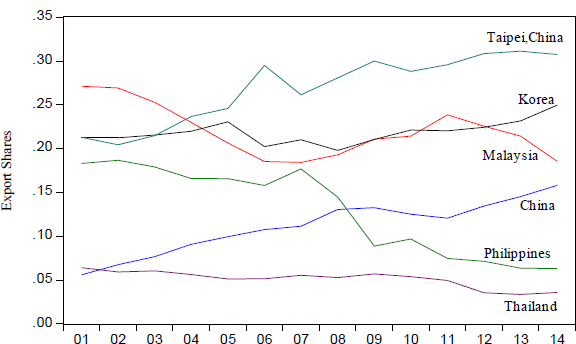 Source: CEPII-CHELEM database.
Note: The figure shows the share of exports from each of the exporting economies to China, Japan, Malaysia, the Philippines, Singapore, South Korea, Taiwan, and Thailand.