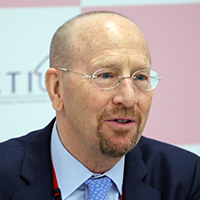 The broad question I will address today is: was comparative advantage denationalized? I shall provide both empirical support for our conclusions, and other insights and thoughts for future directions.

The mindset for national trade policy is comparative advantage, whereby countries tend to specialize in their comparatively well-produced goods and services, and import from other countries which create other goods and services relatively well. This situation is mutually beneficial. In this scenario, wages adjust to technology. Therefore, countries with poor technology may have low wages, which makes them competitive; whereas countries with good technology have higher wages, which makes them less competitive in certain areas.

For a country to benefit from trade, it should improve its comparative advantage at a national level. This improvement can be done through increases in productivity or technology, which will result in a rise in wages. Thus, these improvements for the betterment of a nation improve the workers' situation as well.

I do not approach the topic from an anti-offshoring perspective or one opposed to foreign direct investment. In truth, I think our approach should be more nuanced, but also open to discovering where that may be true. There five facts which suggest this is taking place.

In the period of what I call the ‘second unbundling’ from 1988-2008, emerging markets lowered their tariffs significantly, notably in manufactured goods as well as parts and components of manufacturing goods, whereas advanced economies did not liberalize their markets to any significant degree. While the tariffs were asymmetrically altered, the liberalization did not result in advanced economies increasing exports of manufactured goods as might be expected.

Since 1970, the sharing of manufacturing has rapidly shifted, with the G7 countries losing shares, and China and six others gaining shares. Therefore, the beneficial effects of globalization were, in fact, specific to a limited group of countries. Two-way trade in similar goods, which was previously limited to trade between advanced economies, spread to groupings of two-way trade between emerging and advanced economies from circa 1990. In this period, trade like that of France-Germany was also seen in U.S.-Mexico trade. France and Germany effectively had linked supply chains previously, while U.S.-Mexico and other similar relationships started becoming linked in the same way.

How comparative advantage was denationalized

Before the second unbundling gained traction in 1990, countries like Japan would export machine parts to the newly industrializing economies and the ASEAN-4. However, there was no reciprocal trade in parts because the newly emerging economies lacked the technology to produce appropriate parts or finished goods for the Japanese markets.

By 1998, the global value chain revolution had changed the direction of trade. This cannot be accounted for simply by a liberalization of tariffs, because that would not have led to a change in the direction of trade, only the volume of trade. Instead, a movement of knowhow and technology allowed countries to produce parts and components which had not previously been possible.

Prior to the 1990s, countries such as the newly emerging economies and the ASEAN-4 had not been improving their native technology. Indeed, companies from advanced economies sought advantage by educating the manufacturing base to improve their supply chain. This process denationalizes comparative advantage. The consequences of this require reflection in national policy. National-level subsidies for R&D may not improve a nation's GDP when companies are inclined to exploit these technologies abroad.

The second unbundling, or new globalization, is where better information and communications technologies (ICT) permit flows of firm-specific knowhow, which changed existing comparative advantage. This can be considered ‘knowledge-led’ globalization. Improvements in ICT allowed for G7 firms to move technology to emerging economies, both in terms of protection of intellectual property and effective use. Previous trade was conducted through letters, faxes, and telephone, which made it impossible to separate the production chain in practice. Only ICT provided for these changes because of its precise nature, speed, and security.

The old paradigms of trade and development were inward-oriented and export-oriented development. These benefited governments' policy development for trade. Thailand successfully focused primarily on increasing its share in the global value chain of automobiles. The Philippines had a broader focus on manufacturing parts and components. Costa Rica focused mainly on services, notably firmware.

First, we assume that exporting parts from the global South to the global North reflects Northern technology plus Southern wages. Firms aim to improve their supply chain through the efficiency of their suppliers, to become more competitive. To do this, firms move knowhow abroad. When Southern countries become a net exporter of parts, it reflects the technology that has been invested in them; however, the export of final goods does not, as the activity is simpler.

This index shows countries which lay on a spectrum regarding their industries and parts or goods produced, from a complete comparative disadvantage to a complete comparative advantage. As such, it measures territorial comparative advantage. A typical G7 country would have been situated in the positive final goods index and positive parts index quadrant in 1985 or 1990. A typical emerging market would have been negative on both parts and final goods indices before 1990. The other quadrants represent specialists in final goods and specialists in parts.

The direction of movement of a typical Northern country on the indices represents either reshoring (up vertically) or offshoring (down vertically) of assembly, or domestic (up horizontally) or global (down horizontally) sourcing.

The U.S. journey is different because it begins in the negative for final goods. For automotive, it moves from being a net exporter of parts to a net importer of parts. In other industries, there is movement towards offshoring.

Japan has a similar journey to Germany. It offshores transportation parts but increases slightly in final goods. Other industries show more global sourcing and less net export of final goods.

China's journey for other machinery shows general industrialization with increases in both final goods and parts. Its electrical and optical industry shows the same trajectory, but starting in the positive final goods quadrant. While the path is erratic, China gained competitiveness in automotive parts but is still a net importer of final goods.

Mexico's journey for the electrical and optical industry shows increases in parts and final goods. Transportation shows non-uniform movement; however, Mexico signed the NAFTA agreement during this time period which led to drastic changes in its supply chain role.

Beginning in a typical position, Thailand became an assembler of final goods for the automotive industry, and now is an exporter of parts also. Its other industries have moved less drastically.

The diagram of the journeys found only three major patterns. Japan, Germany, and the U.S. show an offshoring pattern. Thailand showed successful industrialization to become a net exporter of both parts and components and final products. China and Korea industrialized, but also began offshoring, similar to developed countries, becoming a net importer.

There are three implications for Japan. Japanese technology trade has a surplus, which means the Japanese government needs to invest more in R&D and education. Japan's comparative advantage has denationalized. Reshoring parts and components for transport may be a solution. There may be developments beyond the global value chain journeys through AI technology, automation, and IT services. In addition, borderless production process, borderless industries, and borderless production and tasks represent possible futures beyond the global value chain journeys.

Q1: Are there any specific findings from this project that forced you to change your past thoughts on global value chains?

Richard BALDWIN
There have been no findings that do so yet. The real question was how to make global value chains work for development. I do not have the answer yet. The previous measures of global value chains were too blunt to identify the differences between countries. But, does the nature of the participation in the global value chain affect the nature of the development outcome? That second step would change my mind. If, for example, a nation which gained competitiveness in parts had better development outcomes than a nation focused on final products—those kinds of revelations would change my mind. However, the original goal was only to measure this on a micro-basis. The next step is to compare with actual outcomes with the data available. That being said, some personal anecdotes I held, did not match the data.

Q2: Is there any supporting evidence for the implication of a Japanese trade surplus?

OKUBO Toshihiro
The key is microdata. Japanese technology trade data is completely different from usual trade as it is difficult to capture, especially for contracts and timing. If we could get good new microdata for technology trade and firm organization and form of contract, it would lead to a better understanding of the Japanese case. Trade and contract theory provides many kinds of firm boundary issues, which could be used with new data.

Richard BALDWIN
Protectionism is more of a regionalization than fragmentation. The goal of protectionism is to repatriate the supply chains. However, as the new globalization is knowledge-led and not trade-led, it is not easily reversible and has unintended consequences. Moreover, automation is changing the nature of manufacturing by reducing labor input. If the labor cost share is low enough, the shipping costs would be more expensive comparatively, leading to localized production. Additionally, quotas should be avoided for the obvious reasons.

Q4: Regarding the analysis on the amount of net receipts on intellectual property, the Japanese figure seems on par with the U.S. Is this correct?

Richard BALDWIN
The U.S. is plotted on a different scale to Japan on that chart.

Q5: How are you looking at the servicification of manufacturers in the comparison?

Richard BALDWIN
Embedded services are promising; however, the data on services is not good. To track the global value chains properly we should track services as well.