Transportation and the United States Economy: Implications for governance 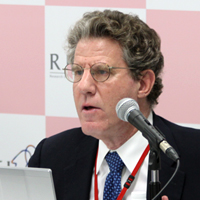 Accordingly, the United States has made heavy investments in its transportation capital stock: highways are valued at nearly $3 trillion; the rail network at another one-third of $1 trillion; and airports and public transit capital raise the total value of the capital stock to $4 trillion. Japan has also invested heavily in its infrastructure. As a share of its GDP, its infrastructure investment was the highest in the world in 2012.

Audience question: Is that limited to transportation infrastructure in Japan?

This is total infrastructure stock. Transportation tends to be approximately 70% of the total in most countries.

From a distributional viewpoint, transportation affects everyone in society. Most societies think of transportation as a merit good, that is, citizens are entitled to accessibility to attain a reasonable quality of life, but it is important to achieve that social goal at minimum cost.

Effects on other sectors

In labor markets, job matching, employment, and wages are linked. If there is a lack of access to many job sites, then it is unlikely that individuals will be matched with the right job. After a two-hour commute, for example, workers' productivity will be lower, and they may desire to quit.

With regard to industry competition and efficiency, an efficient transportation system reaches many markets and enables firms to achieve economies of scale and scope. Transportation is also critical in enabling an economy to develop agglomeration economies in metropolitan areas. Inefficiencies in the transportation system can therefore generate huge costs in labor markets, trade, industry, and urban areas that affect the entire economy.

How has public policy fared? Deregulation significantly improved the intercity modes, including air, rail, and trucking, and achieved static gains that are well-known. The unanticipated gains are the most important. What we learned from deregulation is that regulation had suppressed a lot of innovative activity. We didn't get to see that until the constraints were lifted and the full costs of regulation were revealed. Additional deregulation would be helpful, including more open skies and cabotage: allowing foreign airlines to serve domestic markets. There are concerns in the United States about the airline industry consolidating and raising prices and cutting service to low-density areas. The solution is to allow new foreign entrants, especially low-cost carriers.

Public infrastructure and transportation inefficiencies are pervasive, including growing delays and congestion and increased operating costs and travel time. We do not need to spend significantly more money. Instead, we need a more efficient system. In the United States, the highway trust fund is now running a deficit. Our transit operations are hugely in debt. The fundamental problems are that prices don't reflect cost, investment is suboptimal, and no cost-benefit analysis is applied.

I used to come to Japan to talk about a book we published in 1989 called Road Work. In it, we argued that it is more efficient to minimize the total costs of highways by building thicker pavement, spending a bit more money up front to reduce maintenance costs in the long run, but that is not what we are doing. Highways are wearing out earlier than expected, and we are having to spend more money maintaining them. This coincides with mispricing for trucks. Trucks should be priced based on their axle weight. Trucks with more axles reduce the damage that they do to road pavement, compared with the damage done by trucks with fewer axles. Instead, trucks are priced such that they have to pay more to use the road if they have more axles. Applying basic pricing and investment policy to highway infrastructure could dramatically improve the efficiency of the system, reduce costs, and benefit the overall economy.

Production costs are also inflated by regulations that increase labor and capital costs, including "buy American" regulations and rules that require that wages be aligned with those set by unions.

Off-the-shelf technologies currently exist that could improve the efficiency of highways, but they aren't implemented. The number of lanes on a highway could be changed in real time in accordance with traffic volume. Illuminated lane markers could be used. Cars don't really break down anymore, yet we waste an entire lane on a highway with a breakdown lane.

Although the gains from efficient policies are largely known, policymakers want to raise revenue instead of improving efficiency. It's a game of catch-up that the government cannot win. Both of our presidential candidates are calling for dramatic increases in infrastructure spending. They would not be receptive to my ideas because they are committed to spending money in a way that will turn out to be wasteful and unsustainable.

A lot of the arguments used against pricing are wrong because they ignore the realities of modern research. For example, it is claimed that congestion pricing only benefits affluent people who place a high value on the time savings from less congested roads. But congestion pricing has other beneficial effects that heretofore have been ignored. Vehicle sizes have increased because of congestion as people who travel on highly congested highways when they're in a little car do not appreciate being in traffic with sport utility vehicles (SUVs) that shine headlights in their face. If a driver gets hit by a large car when they are in a small car, they will suffer a more severe accident than when they are in a larger car. Congestion pricing would reduce vehicle sizes and improve safety for less affluent people who drive smaller cars. In addition, congestion pricing would reduce fuel consumption and emissions by reducing vehicle sizes.

Given that Japan pioneered electronic tolling, it is perfectly situated to introduce electronic congestion pricing.

A fundamental question facing all countries is whether they should pursue a path of austerity or stimulus spending. In the United States, certain notable economists advocate infrastructure spending to stimulate the economy. I would argue that this could entail considerable waste by funneling money into an inefficient system. Some policies may raise GDP, but they may not increase overall economic welfare because excessive construction time may significantly increase work zone delays and the project may be completed over budget must also be considered.

In theory, privatization may lead to a welfare improvement over public ownership and operation; but the empirical evidence from the United States is basically nonexistent. One fundamental problem is that we currently do not have experienced high-quality infrastructure firms. Such firms may eventually exist in the United States, in which case it would be worth conducting privatization experiments.

My optimism for improvements in the U.S. and other transportation systems lies in innovations. A satellite-based air traffic control system will improve the safety and speed of air transportation.

Autonomous or driverless cars are another important innovation.

Transportation is a large and important part of an economy that affects other sectors. Unfortunately, most of the system has been compromised by inefficiencies. Many nations have obtained benefits from deregulation, but more benefits are possible. The problem in the public sector is status quo bias. Fortunately, private modes are in an important phase of innovation which could contribute greatly to the economy. Governments should do what they can to expedite—not impede—private modes' innovations.

Clifford WINSTON
I published a paper in the Journal of Economic Literature in September 2013 called "On the Performance of the U.S. Transportation System: Caution Ahead." More than $100 billion would be generated annually by replacing inefficient policies with efficient ones in the transportation sector alone, especially efficient pricing and investment. I think this is a gross underestimate because it does not include how other sectors could benefit from more efficient policies and how those policies would complement innovations such as autonomous vehicles.

Q2. My question is related to the previous question. You mentioned that 50% market penetration by autonomous vehicles would result in 2% GDP growth. However, you just mentioned $100 billion, which would only be 1% of GDP. Is the GDP increase attributable to autonomous vehicles based not just on the transportation sector but also on external effects?

Clifford WINSTON
Yes, that's right. We know that technology and innovation, such as autonomous vehicles, are major sources of growth. The key analytical problem in the study that mentioned previously is finding an instrument capable of measuring the effect of congestion on performance in other sectors. How can this endogeneity problem be addressed? Any unobserved factor is likely to affect the performance and congestion variables. I confined my study to California, because it is one of the few states that has what is known as "self-help counties," which have the option to introduce new taxes to raise funding for highways. Passage of new self-help county tax legislation is politically driven because a county has to mobilize and build political support to pass the legislation, which is time consuming and generally not dependent on the state of the economy. Using self-help county taxes as an instrument allows me to find a causal relationship between congestion and economic performance variables and to estimate the benefits from reducing congestion by adopting autonomous vehicles.

Q3. Infrastructure is a merit good not only for users but also for industry, and people living near the infrastructure will be affected. This complicates the pricing of infrastructure. The government will have to make expenditures. Innovation is very important, but I think that even though the government is involved in the investment of capital, we still will need infrastructure and innovation. How can we improve that area?

Clifford WINSTON
We want to focus on policies that can be justified by cost-benefit analysis. It is surely beneficial to increase the productivity and efficiency of industry and lower its logistics costs. Let's say a Japanese industry approaches the government and says that the congestion in Tokyo is harming business; they have to hold larger inventories and shipping takes longer, etc. They want the government to build a new highway. It might be reasonable to build a one- or two-lane, truck-only highway instead of a five-lane highway for cars and trucks. One obvious problem with building a highway for both cars and trucks is that the latter requires thicker pavement, and the former requires greater width. Also, the truck-only highway could be paid for by charging the industry efficient user charges because it's in their interest to have the highway and have it fully financed. I believe the government could do that and increase efficiency.

I am also cautioning that if a company from China or Japan comes to the United States and says, "We'll build a state-of-the-art high-speed rail system for you!" It is important to ask if that is a welfare maximizing investment compared with other alternative investments. Certain systems could be justified in one part of the world but not justified in another. There needs to be a careful cost-benefit assessment to make an accurate determination of whether a country should embark on a particular investment in its transportation system.