The global financial crisis of 2008-2009 and the subsequent economic and fiscal turmoil still raging in Europe have much in common with the long-term economic stagnation and deflation that Japan experienced after the bursting of its economic bubble. As part of our research exchange, RIETI and the Center for Economic and Policy Research (CEPR) held a joint workshop in London to deepen our understanding of the current economic situation and to strengthen our research efforts. Researchers from the two institutes presented their research findings on the economic crises in Europe and Japan, examining three aspects, namely, the financial system, price fluctuations, and the labor market.

"A Dynamic Model of Bank Runs"

Senior Fellow KOBAYASHI Keiichiro introduced a dynamic macroeconomic model in which the probability of a bank run is a variable. While most ordinary bank run models analyze the bankruptcy of banks in a one-period economy, Kobayashi's model is unique in that it is constructed as an infinite horizon model in which the banking system accumulates assets and liabilities over many years. In his model, when a bank has an excess of liabilities over assets, it does not collapse immediately - a situation that would automatically trigger a bank failure in a one-period model. It also demonstrated that a bank run, which will eventually cause the bank to fail, occurs only after the bank's negative net worth exceeds a certain level. The model, which defines the probability of bank runs as an endogenous variable, is consistent with the mechanism of how a real-world financial crisis occurs (Figure 1). 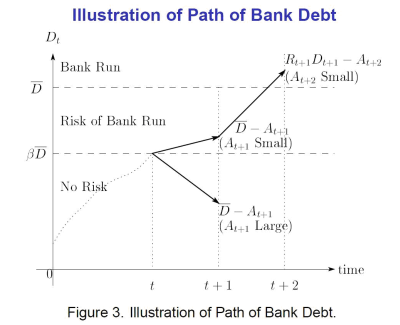 "The Sources of the Crisis"

Professor Morten RAVN presented a model that explains the mechanism of how an economy falls into a liquidity trap. It is a multiple-equilibrium model in which an undesirable equilibrium - one that is different from and worse than the usual equilibrium - arises when the future outlook of the economy deteriorates beyond a threshold level. One characteristic of Professor Ravn's model is that it assumes the existence of sunspot equilibria that fluctuates driven only by changes in expectations. There was some controversy over the relevance of this assumption in relation to a real-world crisis.

The models presented by Senior Fellow Kobayashi and Professor Ravn were examined for their respective characteristics and applicability to real-world cases, followed by in-depth discussion on ways of reviving the banking sector in Europe and measures to combat deflation under the current situation where real interest rates are almost zero. Discussion also took place on the relevance between Senior Fellow Kobayshi's bank run model and an effective freezing of the financial asset market, a phenomenon typically observed in a real-world financial crisis, as seen in 2008.