Dramatic Shift in Global Economic Power due to the Rise of China: Focusing on international comparisons of GDP

The Chinese economy has entered a high-growth period since shifting to reform and open-door policies in the late 1970s with the average annual growth rate from 1980 to 2015 reaching 9.7%, which is significantly higher than those of most major countries and the world as a whole (Figure 1). As a result, China's gross domestic product (GDP) increased 36.3 times from $302.9 billion in 1980 to $10,982.8 billion in 2015, and its share of the world's GDP (in nominal terms, converted to U.S. dollars) rose from 2.7% to 15.0% (Figure 2). Over the same period of time, China's per capita GDP also increased from $306.9 to $7,989.7 (26.0 times), and its ranking in the world rose from 127th among 139 countries and regions to 76th among 189 countries and regions (Note 1). China has become the world's second largest economy after the United States in terms of GDP, and its per capita GDP has reached the level of a middle-income country.

Figure 1: Changes in Real GDP Growth Rate of China
― Comparison with Major Countries and the World ― 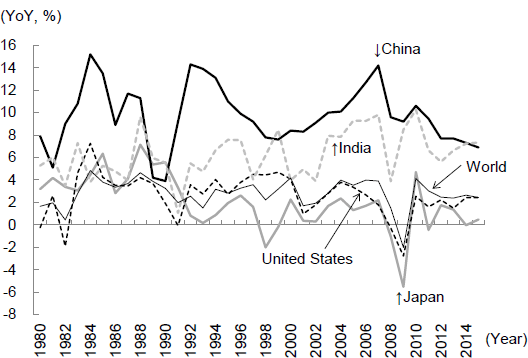 Source: Compiled by the author based on IMF, World Economic Outlook Database, April 2016.
Figure 2: Changes in China's Share of the World's GDP
― Comparison with Major Countries ― 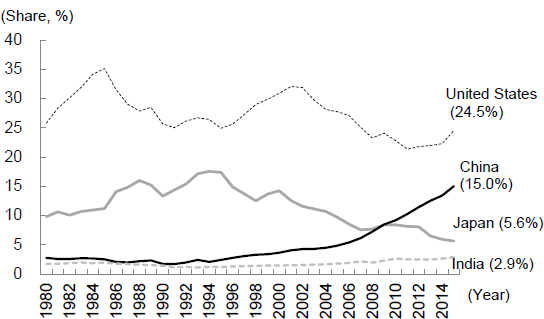 Note: Numbers in parentheses show values in 2015.
Source: Compiled by the author based on IMF, World Economic Outlook Database, April 2016.

Here, I will highlight the shift in global economic power caused by the rise of China by comparing changes in GDP and per capita GDP of China from 1980 with those of major countries such as India, Japan, and the United States (Note 2) (Table 1).

Like India, China has an enormous population, but for a long time, its GDP was not very large because of its low per capita GDP. China's per capita GDP ($306.9) was nearly the same as that of India ($276.3) in 1980, but by 2015 it grew to 4.9 times that of India ($1,617.3). On the other hand, while the population of India increased from 686 million in 1980 to 1.293 billion in 2015 (up 88.5%), a pace of growth much faster than that of China (up 39.3% from 987 million to 1.375 billion), its GDP (= per capita GDP x population) did not grow as much as China's. This resulted in the GDP gap between the two countries widening from 1.6 times to 5.3 times over this period. While India is expected to become the world's most populous country, overtaking China at some point in the future, China is one step ahead of India in becoming an economic superpower. With India's real GDP growth rate surpassing that of China in 2015, hope is rising that India may become a new engine for the world economy, but for some time to come the driving force of India will be limited because of its still low GDP.

Figure 3: Changes in Each Country and Region's Share of GDP in East Asia 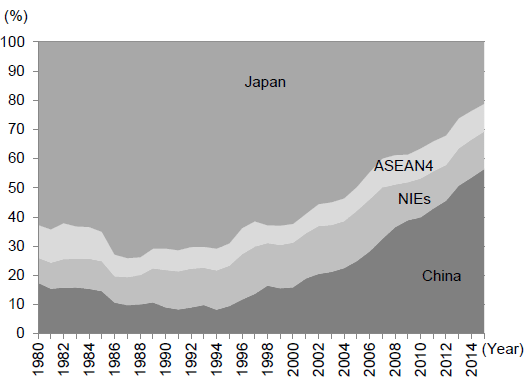 Although China's GDP is now the second largest in the world after the United States, its per capita GDP has yet to exceed the level of a middle-income country. People have started to wonder when China's GDP will surpass that of the United States to become the world's largest, and when its per capita GDP will reach the level of a developed country.

The original text in Japanese was posted on July 7, 2016.