Price Factors Contributing to an Increase in Consumption

In China, for a long time, growth in consumption remained lower than that in the gross domestic product (GDP), but now the situation has been reversed. This reflects the fact that the propensity to consume (the ratio of consumption to income) is no longer on a downward trend but is now moving upward. The propensity to consume seems to be boosted by a combination of factors, including wages increasing at a faster pace than GDP growth, changes in prices, such as the greater rise in food prices relative to non-food prices, appreciation of the renminbi, falling primary commodity prices, rising stock prices, and falling real interest rates.

Wages increasing at a faster pace than GDP growth 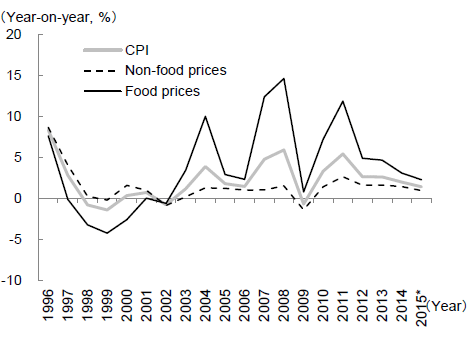 Note: Because the non-food prices index was not published before 2004, these estimates are based on the assumption that the weight of CPI made up by foods is 30%. For 2015, the average of the monthly data from January to November is used.
Source: Compiled by the author based on the CEIC Database (Original data from the National Bureau of Statistics of China).

Appreciation of the renminbi

Figure 2: Changes in the Effective Exchange Rate of RMB

Source: Compiled by the author based on the CEIC Database (Original data from the BIS)

China relies heavily on imports from abroad for its supply of primary commodities. Given a sluggish global economy, the prices of primary commodities such as oil have fallen sharply. By improving the terms of trade, this has raised the level of real income of Chinese consumers and boosted consumption, as in the case with the stronger renminbi.

The asset effect stemming from the changes in stock prices has had an impact on consumption. Although the Shanghai Stock Exchange (SSE) Composite Index, which rose sharply at one point, fell rapidly after peaking at 5,166 on June 12, 2015, it bottomed out at 2,977 on August 26, 2015. Since then, the SSE Composite Index has gradually picked up, and, as of the middle of December 2015, it was about 20% higher than its level from a year ago (Figure 3).

Note: Monthly average. For December 2015, however, it is the average for the days until the 11th of the month.
Source: Compiled by the author based on the CEIC Database (raw data from the Shanghai Stock Exchange).

Together with the rapid growth of online shopping, these factors have contributed to the expansion of consumption, which, in turn, has put a floor under the economy's slowdown.

The original text in Japanese was posted on December 28, 2015.