U.S. imports from China more than doubled from 2000 to 2007. During the same period, manufacturing employment fell considerably while employment in other sectors, such as construction and services, grew. Motivated by this observation, in this study, we quantify how cheaper imported goods impact the manufacturing sector and the economy overall. We quantify the short and long run benefits from access to cheaper intermediate goods as well as the costs from the expansion on import competition across industries and regions in the United States. In our analysis, we account for the effects on the reallocation of employment across sectors and regions and, to the extent of the cost and time required for this reallocation, study the short and long run effects of trade shocks.

We find that growing Chinese import competition resulted in a 0.6 percentage point reduction in manufacturing's share of total employment, or approximately less than one million jobs lost, which is about 50% of the change in manufacturing employment not explained by a secular trend. At the same time, the China shock increased U.S. welfare, with very heterogeneous effects across labor markets. Figure 1 presents the welfare effects across regions in the United States from the China shock. In spite of the fact that employment effects and labor market disruptions are much stronger in some areas than others, the consumer gains and export opportunities result in that nearly all regions experience net benefits from rising Chinese imports.

Several studies document that an important part of the employment loss in manufacturing in the United States from 2000 to 2007 was a consequence of China's trade expansion, either as a consequence of technological improvements in the Chinese economy or reductions in trade costs. 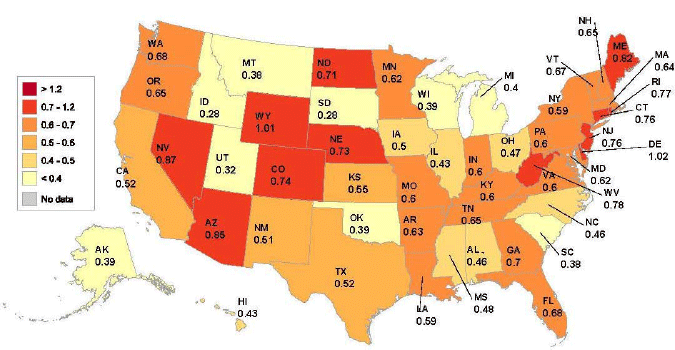 We contribute to this literature by developing a new quantitative model that allows us to study the disaggregated employment, production, and welfare effects across spatially distinct labor markets. Importantly, our framework incorporates different economic and quantitative channels by which an aggregate trade shock can have varying effects across industries and regions in a country. Examples include the impact on industries that are exposed to import competition as well as the impact on industries that benefit from cheaper intermediate goods and how these differential effects affect the decision of workers to move across sectors and regions. In short, our methodology and this study introduce input-output linkages, interregional trade, and migration to the research of how trade shocks impact labor markets across space.