The Regional Spillover Effects of the Tohoku Earthquake

The overall weight of Tohoku in Japan is relatively small, comprising about 4% of nationwide gross domestic product (GDP). In this paper, we show using simulations from a statistical model that the production impact of the Tohoku earthquake and tsunami, however, was quite large, with the negative effect of the earthquake on nationwide production lingering for a year or more. This is partly because Tohoku is a major producer of electronics and other intermediate parts used for production in the other regions of Japan.

In this paper, we use statistical techniques to disentangle how the shock to Tohoku industrial production was propagated nationwide. In our statistical model, regions and industries are linked by input-output relationships, and these relationships affect how shocks are spatially propagated.

The input-output relationships were obtained from RIETI and constructed using data from before the Tohoku earthquake. The results from the statistical techniques based on the existing input-output relationships can be used to simulate the impact of the earthquake on each region and over time. By adding up the responses of each region, we can obtain the nationwide response from the simulation.

The simulated negative impact of the earthquake was larger than what actually occurred in the data. In the actual data, nationwide industrial production returned nearly to pre-earthquake level in about six months (see figure below). This discrepancy arises because in the simulations, it is assumed that there are no other shocks or responses other than the earthquake affecting the industrial productions in Tohoku and elsewhere. In actuality, there was a massive response to limit the impact of Tohoku, both by the government and private sectors. The government carried out large fiscal policies to rescue Tohoku and the rest of Japan, and the private sector carried out charitable works. Private companies quickly sought out alternative suppliers from Tohoku, which minimized the impact of supply chain disruptions. By design, our simulations do not allow these additional responses and shocks. They are designed to show the pure impact of the earthquake on industrial production in Tohoku and in the rest of Japan, assuming that the government and private sector responses and the input-output relationships before the earthquake are constant.

Our paper has an important policy implication. Japanese regions are tightly linked and production disruptions in one region can have large negative spillover effects on other regions. These supply chain disruptions can linger for more than a year. This suggests that companies should have alternative suppliers that are geographically dispersed, so that damage to suppliers in one region can be overcome by sourcing from those in other regions.

Just recently, a large earthquake hit the Kumamoto area, potentially disrupting supply chains throughout Japan. The techniques and analyses provided in our paper may be useful in providing guidelines on the impact of the Kumamoto earthquake on production in the rest of Japan in the coming months. 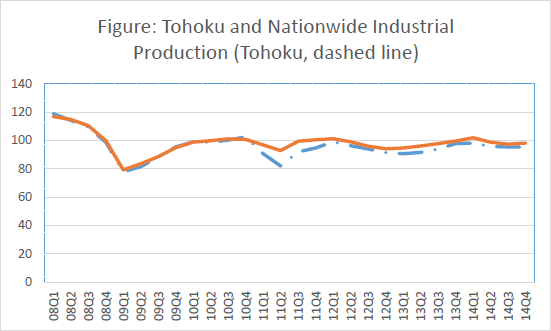