Under the fourth medium-term plan covering the four-year period commencing in April 2016, RIETI will build on the achievements it has made over the previous 15 years and continue to make efforts to enhance its function as a knowledge platform and secure its position as an internationally esteemed policy think tank.

Maintaining long-term growth has been a challenge for economies around the world, and Japan is facing a rapidly aging population ahead of that of other nations. We will conduct research that contributes to policies to maintain Japan's economic vitality as well as to the development of the global economy. Specifically, we will consider system infrastructure, such as the role of Asian currency baskets, and analyze trends in international finance and the global economy, and long-term deflation mechanisms, etc. Furthermore, we will conduct multifaceted and integrated research on the analysis of comprehensive panel data on the elderly, direction of the comprehensive reform of the social security and taxation systems, policy proposals for economic recovery, fiscal consolidation, etc.

This program will study the effect of international trade, movement of capital and labor, and changes in technology on urban and rural areas and industries, while viewing the regions of Japan in the context of the global economy and using this to develop proposals, etc. on such important policy issues as the aging population and regional revitalization. Specifically, we will consider policies to promote the features of export industries in regional areas and regional economic circulation, strengthen functions of regional financial institutions, create social institutions that utilize cutting-edge information technology and transport infrastructure, and utilize and strengthen international production networks (value chains), as well as create statistical indicators that conform with the structure of economic spaces, form policymaking frameworks, etc.

The creation of new knowledge and its exploitation to resolve problems which we face is the main source of innovation. This program will develop original data to understand the innovation processes, and will conduct research from an international perspective, so as to contribute to evidence-based policy formation. Specifically, the program will analyze the innovation capabilities of industries, the economic impact of Artificial Intelligence, intellectual property systems, open innovation, knowledge transfer and the mobility of human resources across organizations, university-industry cooperation, technical standards, and business and industrial organizations that promote innovation.

Through innovation in the key technological areas of sophistication of data processing and evolution of telecommunication networks, signs of changes in the industrial structure have begun to be seen in Japan as well as in other leading nations. Via the Internet of Things (IoT) using sensor technology, large quantities of unstructured data have now become accessible, and artificial intelligence (AI) technology is being gradually put into practical use. In Japan, new industrial frontiers are opening. As such, this program will venture on research as to how policies should be instituted to overcome the challenges facing the Japanese economy, taking cross-industry policies into perspective, in addition to conventional policies intended for individual industries.

The aim of this program is to measure industry and firm-level productivity and its determinants for Japan and other East Asian countries and to conduct research on policies aimed at raising productivity. At the industry level, in addition to updating and expanding the Japan Industrial Productivity (JIP) and China Industrial Productivity (CIP) databases in collaboration with Hitotsubashi University, we will construct an industrial productivity database by prefecture for Japan and examine the total factor productivity (TFP) disparity between regions and the factors behind it, etc. At the firm or establishment level, employing micro-data from government statistics and corporate financial data in Japan and abroad, we will research the following: determinants of productivity gaps among firms; the impact of globalization and changes in demand affect corporate performance; policies for raising productivity in the service sector; productivity gaps between firms in Japan, China, and Korea; and international comparison of productivity dynamics. We will also measure investment in intangible assets such as research and development, software, in-house training, and organizational structure, all of which are important sources of innovation and productivity growth at both industry and firm levels, and examine the economic effects of such investments.

For Japan, a nation with scarce resources, to maintain and strengthen economic vitality and innovation and increase its growth potential by using its advantages amid a declining population resulting from a rapidly aging society and intensifying global competition among other factors, a significant key is how to utilize its human resources. We will conduct multifaceted, comprehensive research on ideal labor market systems to increase worker incentive and capability; reconstruction of employment institutions and systems from a full life-cycle perspective from early childhood education through higher education; human resources development in employment years; and utilization of elderly as human resources as well as from the perspective of promoting diversity including increased women's participation.

Technological innovation is expected to accelerate in many fields such as financial services, information/communications, and life sciences. In such an environment, what can a nation do to build an economy that leads the world in innovation? Many cases have been observed that important innovation is born in a market in which free entry and free enterprise are guaranteed. In order to foster such a market, various rules and institutional arrangements need to be built into the economy. From this viewpoint, in the present program, the design of new types of economic and industrial policies is investigated.

This program aims to review and assess policy shifts, chiefly during the period 1980-2000, as we look at the roles played by Japan's economy and society as well as its trade and economic industrial policies at the end of the 20th century. While the final two decades of the 20th century were a time of significant changes in Japan's economy and society, they also represent an important point of comparison when considering the development of policy after the creation of the Ministry of Economy, Trade and Industry from a historical perspective. We will attempt to clarify how changes in trade and industrial policy at the turn of the century were affected, based on the recognition of policy issues over the preceding quarter-century, choice of policy responses, and evaluation on their results.

RIETI's fourth medium-term plan (fiscal 2016 to fiscal 2019) provides for the pursuit of research from a medium to long-term perspective, in accordance with three new economic and industrial policies (see the figure, below). The plan is based on government-wide medium to long-term policies, such as the Japan Revitalization Strategy, keeping in mind of the medium to long-term structural issues and policy direction in consideration of economic and industrial policies. The theme under the fourth plan is to base research on these perspectives as a basic policy, and conduct multiple projects under the nine research programs that have been created to establish defined fields of study. Depending on the progress achieved or the potential necessity to explore new research areas due to changing economic conditions, we will take steps such as altering or adding to our current research programs as needed. 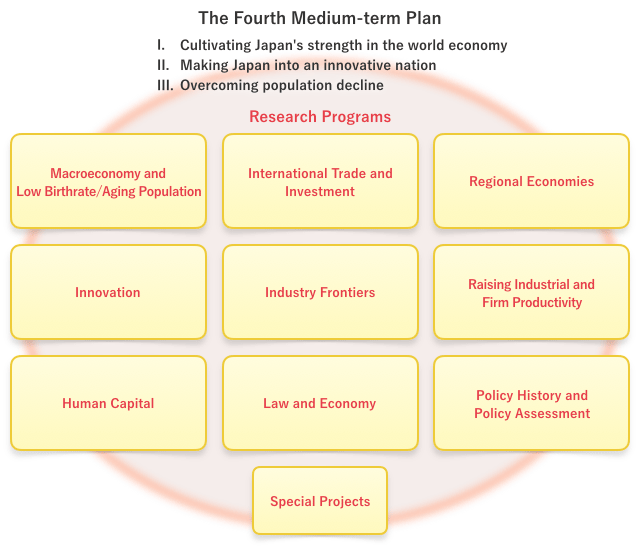 To further improve on the quality of research, RIETI ensures that discussion forums (brainstorming workshops and discussion paper/policy discussion paper seminars) are organized with participation from Japanese and foreign experts and policymakers.